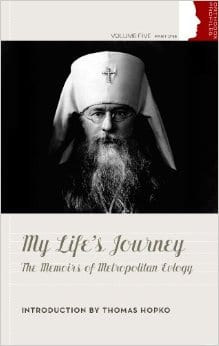 Nearly every section of this book is fascinating and even those who most strongly disagree with the path which Metropolitan Evlogy took in the Paris emigration will not fail to appreciate the historical value of his version of events. For example, the author many time emphasises the “temporary” nature of his submission to Constantinople – that it is until the Church in Russia is freed and so on.

The publication of this translation of Metropolitan Evlogy’s autobiographical notes, which were first written in Russian in the 1930s and published after his death in 1946, is a major achievement.

It will interest not only those whose speciality is the Russian emigration after the revolution and the subsequent Church “discords”, as they are called in this book, but a much wider readership, for the writer was born in 1868 and he was closely involved in pre-revolutionary Church and political affairs over a long period.

To give one example, he was an elected member of the Second and Third State Dumas from 1907 to 1912, where he represented the Orthodox population of the province of Kholm (now Chelm, in Poland). Here he championed the despised peasants against their Polish landlords and the Roman Catholic clergy.

He was then one of a circle of “reforming” hierarchs, lead by Archbishop (later Metropolitan) Anthony Khrapovitsky, though of course their notion of reform was completely contrary to that of the future Renovationists. It meant rather the restoration of the Patriarchate, the return of theological teaching to its patristic roots and the freeing of the hierarchy from the bureaucracy of the Holy Synod. Metropolitan Evlogy’s relationship with Metropolitan Anthony is a recurrent theme of this book and although there were obvious disagreements between them, Evlogy never attempts any personal attack on his old teacher. The author of the introduction might have learned something from this.

Nearly every section of this book is fascinating and even those who most strongly disagree with the path which Metropolitan Evlogy took in the Paris emigration will not fail to appreciate the historical value of his version of events. For example, the author many time emphasises the “temporary” nature of his submission to Constantinople – that it is until the Church in Russia is freed and so on. Quite different from the position of his successors at the “Rue Daru” who have turned necessity into a permanent virtue. In this section of the memoirs, by the way, the Metropolitan surveys the communities of his west European diocese and is astonishingly candid and critical of many of his clergy and monastics. The tone, one has to say, is somewhat patronising.

Finally, this book is important for quite another reason and herein lies its topicality. From 1903 to 1914, Evlogy was bishop in Kholm, Russian Poland; he was Archbishop of Volhynia, at Zhitomir, from 1914 to 1921 (though in exile after 1920) and during the period when the Russian armies were   successful against the Austrians, he administered the parishes which returned from the Unia to Orthodoxy in Galicia. In other words he was bishop in three different parts of what is now Ukraine and which are areas presently regarded as particularly nationalist in feeling.

Metropolitan Evlogy was extremely active in spreading Orthodoxy in former Uniate  regions and he was considered a national enemy by the Poles and Austrians. He was imprisoned for a time by both.

All this is described in great detail but although we told all about Orthodox-Catholic relations and  Russian-Polish cultural struggles, the Ukrainian population is practically never spoke of, at least under this name. The author is at one point captured by Petliura’s forces and later he describes the  attempts to establish an independent Ukrainian Church. Otherwise the Ukrainian movement is barely mentioned.

How things have changed in a century. Peoples who were mostly strongly pro-Russian (including many Uniates!) and pro-Orthodox are now adamant that they have no cultural, linguistic or religious connection with Russia at all.

How easy it is for political and cultural elites to create strong national feelings where once none existed.