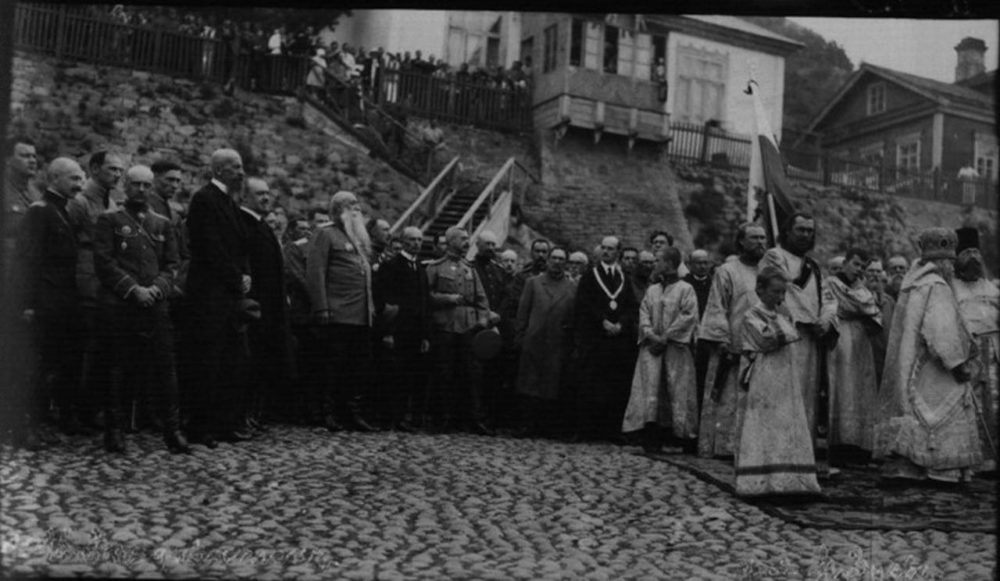 Bishop Michael Bogdanov at moleben at Vladivostok Dormition Cathedral. Apperently on the occasion of opening Zemskii sobor in 1922. On the very right Fr. Pavel Vvedenskii, who was consecrated a bishop in the same year. General Horvat is clearly seen. Photo & Caption: https://d-m-vestnik.livejournal.com

I am telling you this, beloved Far Eastern Siberians, because he also wrote the following: “Our future is in Siberia. It would be good for us to forget Petersburg for now and be in the East in spirit (v. XXI, p. 365). If we would turn to the building up of our Asia we would have a great popular rebirth (v. XXI, p. 517), and then a new Russia would be created, one that would revive the old one.”

The Civil War in European Russia ended in November of 1920, but it still continued in the Far East. On November 22, 1921, the White Army recovered Khabarovsk from the Bolsheviks. Metropolitan Anthony’s address is not dated, but was apparently written before the turning point in military action occurring before the Red Army’s takeover of the Volchaevsk Fortifications on February 12, 1922. From July 23 and until August 10, 1922, Zemskii Sobor (Assembly of the Land) took place in Vladivostok.  Later, in October of 1922, the Zemskaya Rat’ of General Diterikhs attempted a counterattack, which was beaten back and was put to an end by the Bolshevik occupation of Vladivostok.  Thus, the creation of a “Russian Taiwan” in the Crimea or in the Far East was not destined. This translation has been kindly sponsored by Maximus Scott.

To the Christ-loving Russian Popular Militia in the Far East, which has come out in defense of our Orthodox Faith and Russian tradition, may it rejoice.

Dawn of holy hope has shone forth from the East, one that is better than all previous dawns over the past five years, since for the first time Russian leaders and warriors have finally ventured to speak about Christ’s faith with total candor, in the same way as did our righteous forebears, who came out to save their native land with a prayer and glorification to the Holy Trinity, calling everyone to the restoration of God’s truth on earth, and furthermore everything connected to it – God’s temples and monasteries, our Orthodox tsardom, God-protected towns and villages, just and pious laws, and the ridding of our country from the domination of robbers and the godless.

With such appeals, such wishes, the Nizhny Novgorod Army went to Moscow in 1613, as did Tsar Ivan earlier on the way to Kazan in 1552 and Tsar Aleksey later on the way to Lithuania in 1654.  God’s angel marched before them, and they swept away the enemy’s filth off the face of Holy Russia and once again instituted piety, legality, and mercy.

However, the enemies, visible and invisible, were not asleep.  The former went against the fatherland with arms, while the latter tried to arrange what is unfortunately so easy to attain among Russians, in other words to sow dissension among them by spreading some vile slander or vicious rumor.

However, the Holy Spirit guarded our early militiamen and their leaders from such a sin and, fortifying their hearts with prayer and yielding to each other according to the word of the Gospel, they steadfastly maintained obedience to their leaders.  Dooming themselves to death in Christ’s name they bore down on God’s enemies, on the enemies of Holy Russia, rescuing her and spreading the Orthodox Faith, without forcing it upon anyone, but returning freedom to oppressed Christians, which is the state of everyone under the cruel power of Communist Bolsheviks.

O Russian army, O army of Christ!  Preserve in your hearts the same spirit as did your early forbears who were saving our fatherland.   Maintain holy obedience, unselfishness, and chastity, and especially keep prayer in your mind.  Remember that it is not for a minor matter that you are standing up, that you are setting off on a campaign.  We have had holy wars before – our forefathers expelled twenty tongues from white-stoned Moscow, and the imperial troops of Alexander II and Nicholas I liberated Eastern Christians from the Turks and Austrians, but there was not the kind of religious persecution by our enemies as there has been under the Bolsheviks.  Neither the French, nor the Turks, nor the Austrians forbade religious instruction for children, nor did they take away the Church’s heritage or intentionally ravage God’s temples.  None of them were haters of Christ to such a degree as are the Communist Bolsheviks, none of them shed the blood of the innocent martyred tsar and his virginal daughters.  Now, these enemies are striving to destroy faith in Christ itself, as did the ancient tormentor Diocletian and Julian the Apostate.  They bear the mark of satan on their chests and foreheads, and they openly mock holy faith and the Russian people, plunging them into death by starvation. They laugh at hundreds of thousands of the dying, saying, “there is no point in helping them since they will starve to death anyway.”  On the Volga people driven insane from the agonies of hunger have started eating their own children, and then die themselves from such poisoning.

This is how God chastises our Russia for succumbing to the seduction of the Devil’s servants and for betraying God’s Anointed, indulging in robbery, debauchery, and dissipation.

God has called you, the frontier of the Far East, to save Holy Russia.  You have come forth to perform a great and holy feat, you Christ-loving warriors.  The beautiful sun of our hope is rising from the East.  Perhaps God will vouchsafe us to return a God-chosen tsar to Russia, one related to the murdered martyr tsar, as He vouchsafed the militiamen Minin and Pozharsky to find Tsar Michael Romanov.  Courageous volunteers, having spent three years in the southern reaches of the Russian land and presently languishing in foreign lands, will come to your aid.  They can’t wait to come to Russia and to perform a heroic deed against her enemy and to join you in this concerted task.

That great writer of the Russian land, Fyodor Mikhailovich Dostoevsky, reposed 41 years ago on January 28.  He staked his entire life on healing Russian society of its revolutionary spirit and turning people’s hearts to holy faith.  But, seeing the persistence of many, he foretold that in fifty years all of this would turn into a terrible bloody rebellion, that Russia would be taken over by unscrupulous criminals akin to savage cannibals, and that they would doom our fatherland to hunger and various trials and tribulations.

And that’s what happened fifty years after his prediction.

I am telling you this, beloved Far Eastern Siberians because he also wrote the following:  “Our future is in Siberia.  It would be good for us to forget Petersburg for now and be in the East in spirit (v. XXI, p. 365).  If we would turn to the building up of our Asia we would have a great popular rebirth (v. XXI, p. 517), and then a new Russia would be created, one that would revive the old one.”

You, beloved warriors and rulers of the Far East, have been called by God to fulfill the prediction of Dostoevsky, that late great patriot, and Christian.  He commands you to revive the old Russia, that real Russian Orthodox Russia, with a tsar, descended from Patriarch Philaret and Michael Fyodorovich Romanov.  Forge ahead valiantly into this exploit, moving away from any sin, especially from disobedience and pride, from cruelty and anger.  You will bring this new life to Moscow, which will again be filled with a spirit that is ancient but forgotten in these miserable days.  This is a spirit that is of God, of purity, of Christ’s love, and true brotherhood in Christ Jesus, to Whom is due glory and majesty, with the Father and the Holy Spirit, unto ages of ages.  Amen.