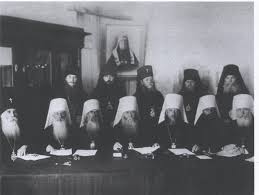 Metropolitan Sergius and his Synod

By the grace of God humble Sergius, Metropolitan of Nizhni Novgorod, deputy locum tenens of the Patriarch and Provisional Patriarchal Holy Synod.

One of the concerns of His Holiness Patriarch Tikhon before his repose was to place our Russian Orthodox Church in the correct relationship with the Soviet government and this way to provide the Church with a chance for a perfectly legitimate and peaceful existence. Dying, His Holiness said: “I need to be alive for three more years.” And, of course, had not his sudden death ended his hierarchical labors, he would surely have completed this task. Unfortunately, various circumstances, mainly words and actions by foreign enemies of the Soviet state, which included not only ordinary faithful of our Church, but also their leaders, were the cause of a natural and justified distrust of the government toward the church leaders in general, which hampered the efforts of His Holiness and he was not destined to see these efforts bear fruit in his lifetime.

Now the lot to be temporary deputy locum tenens of our Church again fell on me, the unworthy Metropolitan Sergius, and together with that lot did fall on me the duty to continue the work of the reposed one and by using all possible means  to strive to achieve a peaceful resolution of our concerns. My efforts in this field, with the contributions of other Orthodox hierarchs, seem to not remain fruitless and with the establishment under my authority of the Provisional Patriarchal Holy Synod the hope is rising of bringing all of our Church administration in due order and discipline, and the confidence is increasing in the possibility of our peaceful life and work within the law.

Now that we have almost reached the goal of our aspirations, the actions of our foreign enemies do not stop: murders, arson, attacks, explosions, and similar parts of the underground struggle are in front of everybody’s eyes. All this destroys peaceful life, creating an atmosphere of mutual distrust and suspicion of all kinds. So much more is it necessary for our Church and mandatory for all of us, who cherish her interests, who want to put her on the path of legal and peaceful existence, so much more obligatory is it for us now to show that we the Church leaders are not on the side of the enemies of our Soviet state or on the side of crazy instruments of their intrigues, but with our people and with our government.

Witnessing this is the first and foremost purpose of our (mine and Synod’s) message.

We further inform you that in the month of May of the current year, after my initiative and with the permission of the authorities, there was organized an Interim Holy Synod under the leadership of the locum tenens of the Patriarch, consisting of all the undersigned hierarchs (in the absence of His Eminence Metropolitan of Novgorod Arseni, who has not yet arrived, and the Archbishop of Kostroma Sebastian, due to illness). Our petition for permission for the Synod to start managing the activities of the Orthodox All-Russian Church was successful. Now our Orthodox Church in the Soviet Union has not only a canonical, but also a completely legal, according to the civil law, central administration, and we hope that legalization will gradually spread to the lower levels of our Church administration: diocesan, county, etc. In light of this It is hardly necessary to explain the meaning and the consequences of the changes in the position of our Orthodox Church, its clergy, all Church leaders and institutions …Let us offer up our prayers of thanksgiving to the Lord, Who favored our Holy Church in such a way. Let us offer our thanksgiving publicly also to the Soviet government for the attention to the spiritual needs of the Orthodox population, while at the same time assuring the government that we will not use for evil purposes the trust bestowed by it upon us.

Having embarked, with the blessing of God, on our synodic work, we clearly realize the magnitude of the problem we as well as all the members of the Church in general face. We need to show not just in words but in deeds that trustworthy citizens of the Soviet Union, loyal to the Soviet regime, are not only those indifferent to Orthodoxy, not only its apostates, but also its most ardent supporters for whom it, with all its dogmas and traditions, with all its canonical and liturgical order, is as dear as truth and life themselves. We want to be Orthodox and at the same time to be conscious of the Soviet Union as our civil motherland, whose joys and successes are our joys and successes and whose failures, failures. Any blow directed at the Union, be it a war, a boycott, some kind of public calamity or just a treacherous murder, like one in Warsaw, is recognized as a blow aimed at us. While remaining Orthodox, we remember our duty to be citizens of the Union “not only out of fear, but also for conscience’ sake,” as the Apostle teaches us (Romans XIII, 5). And we hope that with God’s help and with our common cooperation and support we shall achieve this task.

The only thing that can impede us now is the same as was impeding the ordering of Church life on the basis of loyalty in the first years of the Soviet government. This thing is insufficient awareness of the seriousness of what was accomplished in our country. The establishment of the Soviet authority seemed to many a mistake, random and therefore short-lived. People were forgetting that for a Christian nothing happens by chance and that in what was accomplished here, as at all times and places, acts the same right hand of God, steadily leading each nation to its destined goal. To those people who do not want to understand the “signs of the times” it may seem that it is impossible to break with the old regime, and even with the monarchy, without breaking with Orthodoxy. This attitude of certain Church circles which was expressed, of course, both in words and deeds and was making the Soviet authorities suspicious was hindering the efforts of His Holiness the Patriarch to establish peaceful relations between the Church and the Soviet government. It is for a very good reason that the Apostle admonishes us that in order “to quietly and peacefully live” in all godliness, we can either obey the legitimate authority (I Tim. II, 2) or withdraw from society. None but armchair dreamers can think that such a vast institution as our Orthodox Church with its entire structure organization can exist peacefully in a country while walling itself off from the authorities.

Now that our Patriarchate, while doing the late Patriarch’s will, decidedly and undoubtedly takes the path of loyalty people of the said opinion will either have to overcome themselves and leave their political preferences at home, bringing to Church only their faith and working with us only in the name of the faith, or, if they cannot overcome themselves at once, at least not to hinder us and to move temporarily away from the affairs of the Church. We are confident that they will again, and very soon, return to work with us having been convinced that what has changed is only our attitude toward the government while the faith and the Orthodox life remain intact.

In this situation, the matter of the clergy who left the country with the emigrants becomes especially acute. The harsh anti-Soviet rhetoric of some of our hierarchs and priests abroad which has caused much harm to the relations between the government and the Church, as you know, forced the late Patriarch to abolish the Synod Abroad (2 May/22 April 1922). But the Synod still exists without changing politically; moreover, it has recently, by its claims to power, even split the Church society abroad into two camps. In order to stop this, we asked the clergy abroad to commit in writing to complete loyalty to the Soviet government in all of its social activities. The clergy who would not make such a commitment or break one are to be excluded from the ranks of clergy subordinated to the Moscow Patriarchate. We think that by placing such a line of demarcation we will be secured from any surprises from abroad. On the other hand, our ruling may perhaps cause many to wonder whether it is time to reconsider the matter of their relations with the Soviet government in order not to break off from their own Church and Motherland.

No less important do we consider the task of preparing a convening and then the actual convening of our second Local Council, which will elect not a temporary but a permanent central Church administration and will also make a decision regarding all the “thieves of ecclesiastic authority” who tear asunder the tunic of Christ. The agenda, the time of convening, the objectives of the Council’s meetings, and other details will be worked out later. Right now we only express our firm belief that this upcoming council of ours, while solving many urgent problems of the inner life of our Church, at the same time through its collective mind and voice will also give a final approval to our attempt to establish the right relationship between the Church and the Soviet government.

In conclusion, we zealously ask all of you, Eminent Hierarchs, priests, brothers and sisters, to help us, each in your own rank, with your sympathy and assistance to our work, with your zeal for the cause of God, with your faithfulness and obedience to the Holy Church, and especially with your prayers for us to the Lord so that we may successfully and in a manner pleasing to Him to complete the task given to us for the glory of His Holy Name, to the benefit of our Holy Orthodox Church and for our common salvation.

The grace of our Lord Jesus Christ and the love of God the Father and the communion of the Holy Spirit be with you all. Amen.