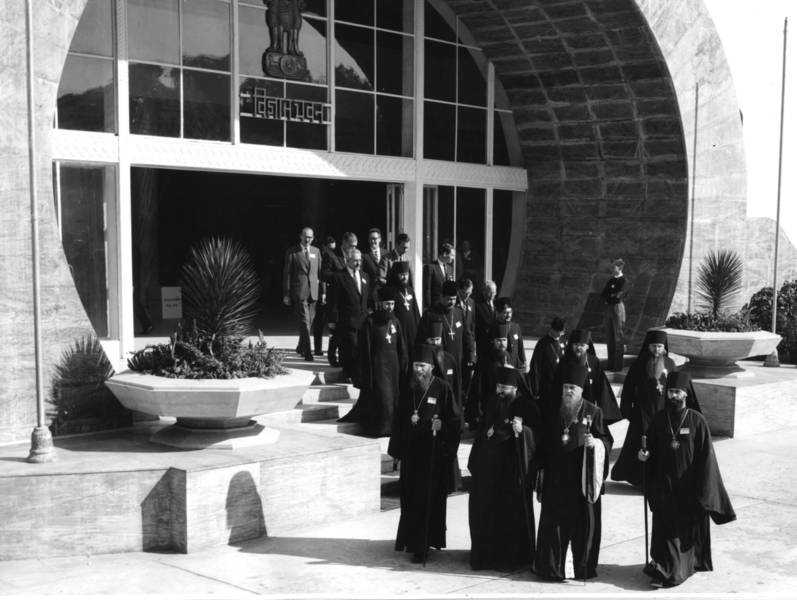 “The Tradition of the Church and the example of the Holy Fathers teach us that there can be no dialogue with those who have broken away from the Orthodox Church. […] We urgently entreat Your Holiness to put an end to this temptation, for the path you have chosen, while it may lead you to union with the Roman Catholics, would cause division in the Orthodox world, since it is doubtless that many of your spiritual children would prefer to remain faithful to Orthodoxy over the ecumenical idea of uniting with the heterodox through compromise and without being fully united with them in the truth. Asking for your holy prayers, I remain a devoted servant of Your Holiness, Metropolitan Philaret, Chair of the Council of Bishops of the Russian Orthodox Church Outside of Russia.” (Pravoslavnaia Rus′ no 3, 1966).

This indeed what happened: this new trajectory led to zealots of Orthodoxy being drawn to the Russian Church Abroad. By a resolution of the Synod of Bishops on December 22, 1965, the Greek Holy Transfiguration Monastery in the greater Boston, which had been under the Patriarchate of Constantinople, was received into the Russian Church Abroad without a letter of canonical release. This led to a change in the status quo from Metropolitan Anastasy’s tenure as First Hierarch, as reflected in a report of Saint John of Shanghai and San Francisco to the Second All-Diaspora Council in 1938, titled “The Status of the Orthodox Church after the War:”

“Previously, the breaking off of canonical communion was used as a means to denounce canonical irregularities in the actions of a local Church. The Russian Church Abroad does not have the ability to act in this way, since her status has not been completely determined or confirmed. For this reason, she ought not to break off communion with other Churches if they have not taken this step first. Yet while maintaining communion, she should not remain silent about breaches of justice in the church.”

It was in this way that the Russian Church Abroad, initially a church for Russian refugees, began to turn into a sanctuary for “refugees” from other Local Churches and converts from other Christian denominations. On January 23, 1968, Archbishop Iakovos sent a telegram to Metropolitan Philaret asking him not to receive into the ROCOR Priest Nikitas Palassis (d. 2017), who had been suspended by the Greek Archdiocese for his criticism of the ecumenical activities of his own church hierarchy. On February 10, 1968, on the basis of Canon 15 of the First-and-Second Council (861), Fr. Nikitas Palassis was received into the ROCOR by the Russian Church Abroad; this was approved on February 17 of the same year by the Synod of Bishops.

Every historical phenomenon ought to have a reference point in prior history. In this particular case, such a basis might be provided by the reception of political refugees from the countries of the Soviet block into the ROCOR and the creation of Romanian and Bulgarian church structures within the ROCOR under Metropolitan Anastasy following World War Two.[1]I am grateful to Reader Andrei Anishchenko for pointing out this fact in his term paper, “The Context of the Sorrowful Epistles of Metropolitan Philaret and Their Contribution to the Development of … Continue reading

On the First Sunday in Lent, 1969, Metropolitan Philaret issued an open admonition to Archbishop Iakovos, containing the following words: “We protest your un-Orthodox ‘Ecumenical Prayer Service’ and His Holiness Patriarch Athenagoras’ incorporation of the Pope of Rome and ‘of all the Confessions of East and West’ into the dyptichs, as stated in His Holiness’ Christmas encyclical.”

On July 27, 1969, Metropolitan Philaret issued a Sorrowful Epistle addressed to all Orthodox bishops. However, it does not contain any proposals for a conciliar condemnation of ecumenism, nor does it allow for the possibility of a different approach within the Orthodox tradition. The result is a monologue rather than a dialogue – in which, for example, Protopresbyter Alexander Schmemann (d. 1983) might have taken part (his reply to the First Sorrowful Epistle is reproduced below).

At the same time as Sorrowful Epistles were issued, the Russian Church Abroad continued to pursue a trajectory of isolation from other local churches. On December 31, 1969, the ROCOR Synod recognized consecrations of bishops for Archbishop Auxentios Patras’ Old Calendarist Synod that had been performed earlier by ROCOR bishops without Metropolitan Anastasy’s blessing.

Metropolitan Philaret’s second Sorrowful Epistle was written on the First Sunday in Lent, 1972, and also draws the attention of Orthodox bishops to the matter of participation in the ecumenical movement. While renouncing its attempts to fight for Orthodoxy within the Local Churches, the ROCOR buttressed the True Orthodox by consecrating bishops of the so-called Matthewite Greek Old Calendarist Synod in Holy Transfiguration Monastery in Brookline, MA on September 30, 1971. One of the Matthewites’ demands in order for them to enter into communion with the ROCOR was that the latter cease prayerful communion with New Calendarists and ecumenists.

One practical consequence of this new orientation towards Orthodox zealots can be seen in Archpriest George Grabbe’s report to the President of the Synod of Bishops on December 7, 1972, protesting the prayerful communion of Archbishop Nikon (Rklitsky, d. 1976) and Bishop Laurus (Škurla, d. 2008) with Archbishop Iakovos at the Greek church in Flushing during the visit of the relics of Saint Nicholas. The protest was motivated by the fact that, according to resolutions of the ROCOR Synod of Bishops from 1967 and 1971, ROCOR clergy were to avoid any kind of communion ecumenist bishops, all the more so seeing as the ROCOR had received clerics who had broken away from them for “reasons of dogma.” [2] ROCOR Synod Archive.

Metropolitan Philaret’s third Sorrowful Epistle saw the light of day on December 19, 1975, as a review of a book by Archbishop Athenagoras (Kokkinakis, d. 1979) of the Ecumenical Patriarchate in Great Britain, The Thyateira Confession: The Faith and Prayer of Orthodox Christians (The Faith Press, 1975). This book, which was conceived as a profession of faith for the Orthodox Church, caused consternation among the Orthodox, above all in Great Britain. For instance, with the permission of Metropolitan Antony of Sourozh (Bloom, d. 2003), Priest Job Dubois transferred to the Russian Church Abroad in December 1975. The publication of this book could, again, have served as the groundwork for dialogue. For example, even before the third Sorrowful Epistle was published, Archpriest John Meyendorff, editor of the official publicity organ of the Orthodox Church in America, pointed out the problems with Archbishop Athenagoras’ book (“The ‘Thyateira Confession’,” The Orthodox Church, September 1975).

Things thus worked out such that the new course signaled by Metropolitan Philaret as First Hierarch did not foresee the dangers of having a double standard for oneself and others, nor did it make room for the understanding that one can err “to the right” as well as “to the left,” since alternative theological approaches within the limits of the Tradition of the Orthodox Church are indeed possible. On a practical level, anti-ecumenical rhetoric did not help the ROCOR to view itself critically while remaining indifferent or showing a lack of compassion for “outsiders.” The ROCOR began to be perceived by her members as a gold standard of Orthodoxy. This image became very attractive for many potential new converts, who started to come to the ROCOR due to problems in their own Christian denominations. The challenge they faced was not to be troubled and not to look further after discovering that the traditions and practices of the ROCOR did not always fit with their conception of traditional Orthodoxy.

Archpriest Alexander Schmemann, On the “Sorrowful Epistle” of Metropolitan Philaret