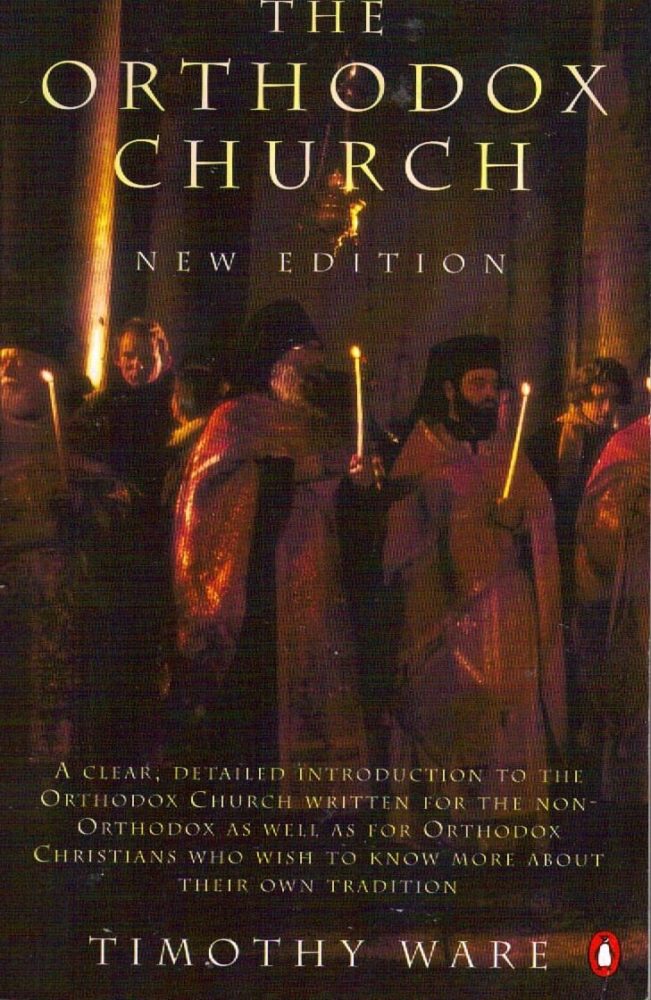 T. Ware's the Orthodox Church has become a standard reference

The first encounter of Metropolitan Kallistos with Orthodoxy was at a London church on Buckingham Palace Road where services were alternated between the Synodal and the Patriarchal communities. It is hard to tell now which one of these had the All-Night Vigil when 17-year old Timothy Ware happened into the church on one Saturday afternoon in the summer of 1952.

The first encounter of Metropolitan Kallistos with Orthodoxy was at a London church on Buckingham Palace Road where services were alternated between the Synodal and the Patriarchal communities. It is hard to tell now which one of these had the All-Night Vigil when 17-year old Timothy Ware happened into the church on “one Saturday afternoon in the summer of 1952.

The first encounter of Metropolitan Kallistos with Orthodoxy was at a London church on Buckingham Palace Road where services were alternated between the Synodal and the Patriarchal communities. It is hard to tell now which one of these had the All-Night Vigil when 17-year old Timothy Ware happened into the church on “one Saturday afternoon in the summer of 1952.”[1]Bishop Kallistos of Diokleia, “Strange Yet Familiar: My Journey to the Orthodox Church,” The Inner Kingdom (Crestwood, NY: St. Vladimir’s Seminary Press, 2001) … Continue reading

Five years later Timothy found himself in another émigré church in Versailles near Paris, where St. John of Shanghai was celebrating the Divine Liturgy. As Metropolitan Kallistos tells in his essay on his journey to Orthodoxy (cited throughout this article): “I arrived near the end of the service, shortly before the moment when he emerged to give communion. No one came forward to receive the sacrament, but he remained standing with the chalice in his hand; and with his head on one side in his characteristic way, he stared fixedly and even fiercely in my direction (he had never seen me before). Only when I shook my head did he return to the sanctuary with the chalice.”[2]Ibid. http://www.myriobiblos.gr/texts/english/wear_journey2.html (Nov. 12, 2008) Nevertheless St. John anointed him with the oil at the end of a moleben that followed the liturgy. “What the truth of the matter, – recalls Metropolitan Kallistos – my experience at Versailles strengthened my feeling that the moment had come for action. If Orthodoxy is the one true Church, and if the Church is a communion in the sacraments, then I needed above all else to become an Orthodox communicant.”[3]Ibid.

The next year he was received in Orthodoxy by Bishop James of the Patriarchate of Constantinople. The reason why he decided not to be received into the ROCOR is rooted in his double loyalty to this Church of Russian refugees and to world Orthodoxy. On the one hand he admired the ROCOR for its perseverance of monastic and ascetic heritage, for the veneration of New Martyrs of Russia, but on the other hand Timothy was disturbed by its increasingly growing isolationism and was confused by the relations among Russian jurisdictions in the immigration. Therefore, Timothy was delighted when the Greek bishop instructed him to go for his spiritual needs to Fr. George Cheremteff (+1971), a ROCOR priest, at the cathedral in London. [4]A biography of Fr. George can be found in Pravoslavnaia Zhizn 6 (Jordanviile: Holy Trinity Monastery, 1997).

Since Metropolitan Laurus had mentioned to me that Timothy Ware had done research at the library of Holy Trinity Seminary, at my meeting with Metropolitan Kallistos in June, 2008 I asked him about his visits to Jordanville. Here is what he related: “In 1959-60 I was a research fellow at Princeton. I wrote to Fr. Konstantin Zaitsev and asked whether I could come. I received an invitation from him and spent three weeks at the monastery during the summer. I have visited Jordanville three times, and totally I spent there five weeks. There were about 40 monks at that time, and the abbot was Archbishop Averkii. Father Konstantin Zaitsev was quite strict about church matters. Fr. George Grabbe, whom I met at the Synod, was quite unhappy with Fr. Konstanin’s views. The seminary maintained high standards of Russian studies. I met a student there who had already started as a seminarian and having been dissatisfied with the quality of teaching left for the Russian department of one of the universities. However, the standards of teaching at that place were lower than in Jordanville, and that fellow came back. ”

After his return to England Timothy was invited to join the monastic brotherhood of Archbishop Vitaly Ustinov, who was looking for monastic candidates in various quarters of the world. Timothy spent six month at the podvor’e in Montreal and Holy Transfiguration Skete. Having been an intellectual person all his life, Timothy missed his studies very much. In the same conversation with me Metropolitan Kallistos fondly recalled his time with Archbishop Vitalii and told this story. Once during a meal the brethren discussed the status of non-Orthodox, and Vladyka Vitalii said, “There are gifts of real sanctity among simple people, but not in the mysteries.” Metropolitan Kallistos also related the other story about Archimandrite Vitalii when he shared the church in London with Fr. Anthony Blum of the Moscow Patriarchate. The latter told Metropolitan Kallistos that he once asked Fr. Vitalii what he thought of him. ‘If I wanted to be polite I would say: ‘You are not a priest’,’ Vitaly responded. ‘But I will give you a straight answer: ‘If you are under Moscow, you are a priest of Satan!’ ‘[5]I reproduce this words from the following article: Felix Corley, “Metropolitan Vitaly Ustinov Russian Orthodox leader in exile,” Felix Corley, Independent (28 Sept., 2006) … Continue reading Despite this tunnel-vision-ecclesiology, based on personal experience Metropolitan Kallistos supposes that Archbishop Vitalii might have a gift of insight. It is interesting to note that in his second, 1964 edition of The Orthodox Church the author is mentioned as “working in Montreal for the Russian Orthodox Church in Exile.” In 1964 he left Canada, and in the same year Eustratios Argenti: A Study of the Greek Church under Turkish Rule was published. Archbishop Vitalii received into the Orthodox Church Gerald Palmer and M-me Kadloubovsky, translators of Philokalia, who after the death of Fr. George Cheremeteff became Bishop Kallistos’ spiritual children.

Fr. George Cheremteff did not bless Timothy to be ordained in the ROCOR, because “a very narrow minded spirit is taking place, and the younger bishops will be too narrow for you.”[6]Personal Communication. June 2008. In 1966 Timothy Ware was ordained a priest and tonsured a monk in St. John’s Monastery on Patmos. As a lay person Timothy Ware attended services in the cathedral and convent for seven years, and when he became a priest-monk he helped Fr. George to serve at the convent. Around 1970 Fr. Panteleimon of Boston’s Holy Transfiguration Monastery happened to be in the church, where Fr. Kallistos served, and was very upset that a clergyman of the Patriarchate of Constantinople was serving in the ROCOR church. Five years later the abbot of the Monastery of Sts. Kyprianos and Justina in Greece, Archimandrite Kyprianos, in his letter of 17 June of 1975, complained that Father Kallistos used to serve from time to time in the Annunciation Convent in London (ROCOR).[7]Stanford University Library. Department of Special Collections, The Bishop Grigorii Papers [M0964]. Box 3, Folder 7: Grabbe to Various Addresses. This is probably a letter to Father George Grabbe. Thus Fr. Kallistos ceased to serve there. It is also necessary to mention that in his periodical Eastern Churches Review Metropolitan Kallistos always gave space for the representation of the ROCOR position on topical issues.