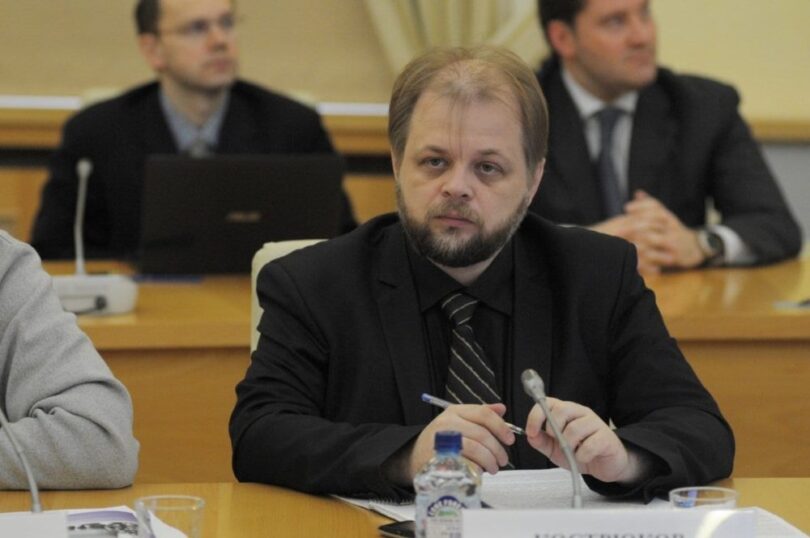 Meet one of the leading Russian scholars of the Russian Church Abroad.

An interview with the author of the first monograph on the early period of the ROCOR (1920-1925): Russkaia Zarubezhnaia Tserkov’ v pervoi polovine 1920-kh godov (The Russian Church Abroad in the First Half of the 1920s). We have also posted Andrei Kostriukov’s article on the relationship between the Serbian Orthodox Church and the Russian Church Abroad from 1920 through the Second World War.

Dr. Andrei Alexandrovich Kostriukov holds doctoral degrees in history and theology and is a Senior Researcher at the Center for Modern Russian Church History at Saint Tikhon’s Orthodox University of the Humanities (STOUH), as well as a Senior Instructor ат STOUH’s Department of the History of the Russian Church. This translation has been made possible by a grant from the American Russian Aid Association – Otrada, Inc.

Andrei Alexandrovich, how did you come to study the topic of the ROCOR?

I have been interested in this topic for a while now, from the mid-1990s. My interest was sparked by the existence of ambivalent views of the Church Abroad. People’s attitudes towards the ROCOR were far from definite. A lot of people at the time – and I was no exception – came to know Orthodoxy through works that were written within the Church Abroad. These included, for example, Protopresbyter Mikhail Pomazansky’s Dogmatic Theology [Dogmaticheskoe bogoslovie], Archbishop Averky (Taushev’s) commentaries on the New Testament, and, lastly, the works of Hieromonk Seraphim (Rose). Saint John (Maximovich) was also well-known in Russia. I can attest to the fact that, in the student circles of those years, the Church Abroad was not perceived as being schismatic. Nevertheless, one often heard harsh words uttered with respect to the Russian Orthodox Church Abroad (the ROCOR). It was, perhaps, at that time that I first felt the desire to make sense of the questions of the origins of the Church Abroad and of Her ideology. Thus, from that time on, I began studying materials on the history of the Russian emigration.

Andrei Alexandrovich, you are the author of the book The Russian Church Abroad in the Early 1920s [Russkaia Zarubezhnaia Tserkov’ v pervoi polovine 1920-kh godov] (Moscow: Saint Tikhon’s University Press, 2007). Please tell us how it is different from your previous works, including with reference to the sources you used. What period have you focussed on?

The problem, in my view, was that researchers, depending on their sympathies or on political fiat, could provide varying interpretations of one and the same set of facts. A far more significant problem was the fact that, for a long time, the archival collections of the Russian Church Abroad from the pre-war period were not accessible. The result is that in Russia, the history of Orthodoxy in the emigration was studied, and still is, based on Soviet-era publicity rather than documentary evidence. Although some research on the history of the Church Abroad came out in the 1990s (for example, Anna Beliaeva’s dissertation on The Russian Orthodox Church Abroad from 1919-1926 [Russkaia Pravoslavnaia Tserkov’ za granitsei v 1919 – 1926 gg.] and Archpriest Georgii Mitrofanov’s book The Orthodox Church in Russia and in the Emigration in the 1920s [Pravoslavnaia Tserkov’ v Rossii i v emigratsii v 1920-e gody]), nobody undertook an in-depth study of this question.

I saw my own task as that of writing the history of the origins of the Church Abroad without skewing to the right or to the left, without trying to take any particular side. I would like to emphasize that my work was not timed for the reunification in 2007. Even if this event had not taken place, my book would not have been altered in the slightest. The basis for the work was provided by documents from the Russian State Archive. Based on these documents, I examined the period of the origins and establishment of the Church Abroad, that is, the period when Patriarch Tikhon was the head of the Church.

As a result, I was able to make a whole array of conclusions. First of all, I would like to say that it is impossible to reduce the problem of ROCA Synod’s breaking away from the church within Russia to mere politicking and lust for power on the part of the hierarchs of the Church Abroad. Is it possible that the over thirty bishops who ended up living abroad all happened to be politically motivated and power-mad? In actual fact, the situation was more complicated.

Let us consider the situation of the Church Abroad in the early 1920s. The work of the Supreme Church Governance (Vysshee Tserkovnoe Upravlenie or “VTsU”) of the Church Abroad had been blessed by the Synod of Bishops of the Serbian Church (in August 1921). There is also a whole gamut of indirect information suggesting support on the part of Patriarch Tikhon. Despite this, the VTsU soon found itself in а difficult situation. On the one hand, the clergymen living abroad could hardly remain silent about the persecution of the Russian Church; on the other hand, the VTsU’s declarations gave cause for the Bolsheviks to redouble their oppression of the Church within Russia. As a result, certain members of the Church Abroad – such as, for example, Bishop Benjamin (Fedchenkov) — proposed ceasing to proclaim the word of truth altogether; others, like the VTsU Secretary Eksakustodian Makharoblidze, proposed breaking off relations with Moscow in order to combat Bolshevism freely without endangering the Patriarch. It is obvious that the first path would have led to a conflict between the VTsU and its flock, who mostly held anti-Soviet views, whereas the second would have brought about a schism with the Patriarch. The Synod of Bishops in this period thus decided to strike a balance between these two extremes. The way I see it, this is the very key to understanding the relations between Moscow and Sremsky Karlovtsy in the 1920s.

On the whole, the Synod of Bishops saw its mission, in part, as maintaining the unity of the Russian emigration on the basis of the Orthodox faith. It was for precisely this reason that in the early 1920s, the Synod sought not to divide its flock along political lines. Despite significant pressure from political organizations, the Synod of Bishops of the ROCOR refused, in 1924, to recognize Kirill Vladimirovich Romanov as Emperor and did not allow parish priests to commemorate him as Emperor in services. Few people are aware that a year earlier, in 1923, the Synod of Bishops had instructed parish priests not to engage in monarchistic propaganda when preaching — though it must be conceded that the pendulum ultimately swung back in the opposite direction.

Another important point to which attention had not been paid was the reorganization of the governance of the Church Abroad from 1922-1923. The opponents of the ROCOR subsequently said that the hierarchs of the Church Abroad did not wish to carry out Patriarch Tikhon’s orders to dissolve the VTsU of the Church Abroad, and thus they resorted to a clever trick by replacing the VTsU with a Synod. I take a different view of the situation. Following the Karlovtsy Synod, at which the tone was set by radical laypeople, the Bishops began increasingly to edge out the laity and clergy from the Church governance. The Patriarch’s decree of 1922 shutting down the VTsU was therefore in some sense advantageous for the Church Abroad. This decree enabled the bishops to remove the radical activists from the administration of the ROCOR (above all Archpriest Vladimir Vostokov and General Nikolai Batiushin), to establish a Synod consisting only of bishops, and to follow a more careful political line in the future. Though, of course, such a policy still did not satisfy the Bolsheviks – they required servile submission from the Church both in Russia and in the emigration.

Could you tell us something more about the reaction to your book? Were there serious reviews of it?

The first response to my research came a year before the book was even released. An article of mine on Metropolitan Evlogii (Georgievskii) was published in the Journal of the Moscow Patriarchate. It was later incorporated into my book. The documents that I used allowed me to affirm that, after he received Patriarch Tikhon’s decree shutting down the Governance of the Church Abroad, Metropolitan Evlogii acted very differently from how he described in his memoirs. Among other things, he declared at the Council of 1923 that authority in the Church Abroad ought to rest, as before, with a Synod of Bishops headed by Metropolitan Antony.

My article attracted the attention of Nikita Alekseïevitch Struve, who did not find my conclusions to be to his liking, and wrote a critical piece about it in Issue No. 192, pp. 236-239, of the Bulletin of the Russian Christian Movement [Vestnik RKhD]. It must be said that his piece convinced me that I was on the right track: my main conclusions were left untouched in it, whereas only secondary details were subjected to criticism.

After my book came out, Professor Sergei Lvovich Firsov of Saint Petersburg State University expressed his opinion on it. His reasonably sympathetic review appeared in the first issue of the journal Tserkov i vremia.

It was around that time that Professor Olga Iurievna Vasilieva of the Russian Academy of Public Administration came across my work; she, too, gave it a positive assessment, while also making a number of sharp and valuable comments, which I, of course, took into account.

The book, in a slightly expanded version, became the cornerstone of my doctoral dissertation, which I defended in the Department of State-Confessional Relations of the Russian Academy of Public Administration in late 2007. It must be said that the evaluation of my research by the dissertation committee was positive on the whole. In principle, I continue to await further comments and reviews, both positive and negative. This topic has hardly been studied exhaustively, and I do not preclude the possibility that researchers may find new documents that overturn some or other of my conclusions.

Please tell us about your academic plans. What are you working on?

At the present time, I am continuing to work on the history of the Russian Orthodox Church. There are still a lot of blanks left. A teacher of the Kiev Theological Academy, Vladimir Burega, and I are editing a range of interesting documents for publication in the Bulletin of Saint Tikhon’s Orthodox University of the Humanities, which, among other things, confirm that as late as 1924, Patriarch Tikhon still considered Metropolitan Antony Krapovitsky to be the spiritual leader of the Russian emigration. Another line I am pursuing in my work is the relationship between two émigrés who were both outstanding but had different personalities: Archbishop Seraphim Sobolev and Protopresbyter Georgii Shchavel’skii.

You teach at Saint Tikhon’s Orthodox University for the Humanities. To what extent does the ROCOR feature in your course of lectures?

In addition, for several years now, Saint Tikhon’s Orthodox University of the Humanities has provided courses over the Internet for those who live far from Moscow. Two years ago, a special course on the history of the Russian Church Abroad was developed for those who study theological and historical disciplines online. This course is designed to last a month. So our students now have a chance to find out more about the Russian Church Abroad.