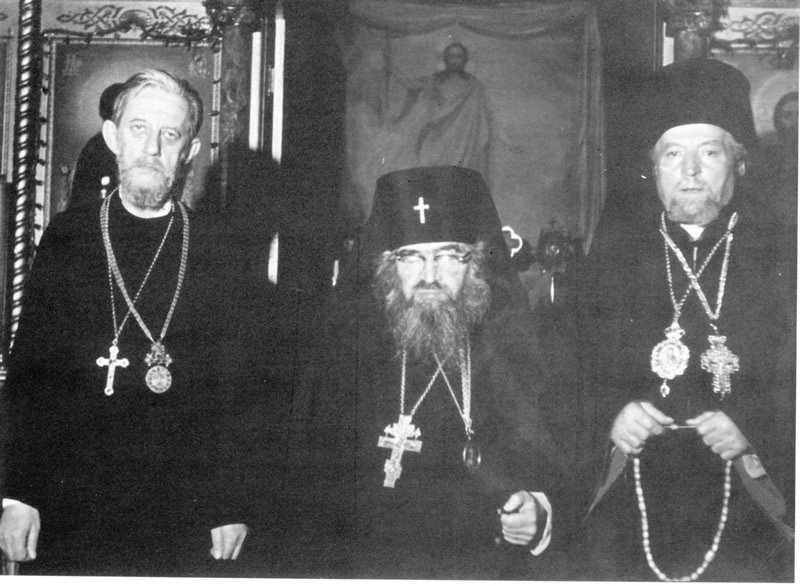 St. John of Shanghai in the center with Bishop John Kovalevskii on the right and Bishop Theophil on the left

Archbishop Teofil (Ionescu) was born in Boboc, in the Buzau district of Romania on 14 Oct 1894. He entered a monastery at age fourteen; entered the Tismana Monastery in 1915, was tonsured and ordained hierodeacon that same year. Appointed proto-psalte (‘proto-reader’) of the Metropolitan Cathedral in Bucharest in 1918, and ordained to the priesthood in 1921.

Archbishop Teofil (Ionescu) was born in Boboc, in the Buzau district of Romania on 14 Oct 1894. He entered a monastery at age fourteen; entered the Tismana Monastery in 1915, was tonsured and ordained hierodeacon that same year. Appointed proto-psalte (‘proto-reader’) of the Metropolitan Cathedral in Bucharest in 1918, and ordained to the priesthood in 1921. Appointed superior of the Patriarchal Chanting School, and assistant priest at the Patriarchal Cathedral. In 1925 he founded the Patriarch Miron Missionary Association (named after the first Romanian Patriarch, Miron (Elie Cristea, 1868-1939) and a religious journal, ‘The Good Word.’ He also founded a home for the elderly and a canteen for the poor. In 1928 he completed the Nifon Metropolitul Seminary in Bucharest, receiving his licentiate in Theology for his dissertation, ‘The Life and Work of Metropolitan Petru Movila of Kiev.’ He went on to receive his master’s degree in Paris at the Protestant Faculty of Theology for the very same dissertation. In 1938, Patriarch Miron (Cristea) appointed him as rector of the Romanian Holy Archangels Parish in Paris; in 1942, he was elevated to mitred archimandrite, a rare distinction in the Romanian Church. In 1945, the communist hold on the church authorities in Romania forced them to remove Archimandrite Teofil from his position at the parish in Paris. He went to the US, and became priest at the Saint Symeon Romanian Church in Detroit, and was elected president of the Diocesan Council (the previous Bishop for the Romanian Orthodox in America, Polycarp {Pompei Morusca, 1883-1958}, had returned to Romania and was not allowed by the government to leave Romania to return to the US).

In 1951, Viorel D. Trifa (1914-1987), a Romanian Orthodox activist newly arrived in the U.S., led followers to the headquarters of the Patriarchal Romanian Church in Grass Lake, Michigan; the Patriarchate at that time was under the control of the communist Romanian government. Trifa and his followers chased out the Patriarchal party, and took over the headquarters, and Trifa was then elected Bishop for Romanian parishes in the U.S. Tonsured a monk and taking the name Valerian, he was then ‘consecrated’ by members of an uncanonical Ukrainian Orthodox group. Archimandrite Teofil at that point was on good terms with Bishop Valerian and his Diocese.

Metropolitan Visarion (Puiu, 1879-1964) of the Romanian Patriarchate, was sentenced to death by the communists in absentia in 1946. Met. Visarion was in Western Europe at the time, and the Romanian government was never able to serve the arrest warrant. The Holy Archangels Parish in Paris became a center for Romanian refugees, and it was there that Metropolitan Visarion established the Romanian Orthodox Diocese for Western Europe. The efforts of the communist regime to take over the Holy Archangels parish in Paris obliged the faithful to break canonical relations with the Romanian Patriarchate, and to join, out of necessity, the Russian Church Abroad (see Biography of Metropolitan Visarion {Puiu}). The Diocese followed the new calendar, as had the Romanian Church since 1925; this was allowed to continue by the Church Abroad for pastoral reasons. In 1954, the aged Metropolitan Visarion chose Archimandrite Teofil as his successor, and he was consecrated to the episcopate by Metropolitan Visarion, Saint Archbishop John (Mikhail Borisovich Maximovitch, 1896-1966) of Brussels and Western Europe, and Bishop Nafanael (Vasily Vladimirovich Lvov, 1906-1986) of Carthage and Tunis. Metropolitan Visarion then retired. The consecration took place in the Saint Nicholas Church in Versailles on 26 Dec 1954. Bishop Teofil was given the title ‘of Sevres’ (Severineanul in Romanian), after a small town near Paris. His Diocese included the parishes in Western Europe and a few in the US and Canada. After returning to the United States, Bishop Teofil then denounced Bishop Valerian (Trifa) as a ‘self-ordained heretic,’ and began a campaign to take over his Diocese. This ultimately failed miserably, as Bishop Teofil’s Diocese never had more than a few parishes. Bishop Valerian’s episcopal consecration was later regularized by Bishops of the North American Metropolia, and he joined his Diocese to the new Orthodox Church in America in 1970 as the Romanian Episcopate (the largest Romanian Church grouping in the U.S. Recent reports {2009} claim that this Episcopate is planning to leave the Orthodox Church in America to join the Romanian Patriarchate. The Romanian Episcopate is one of the OCA’s three ‘ethnic’ Dioceses. The other two are the Albanian Archdiocese, and the Bulgarian Diocese, also formerly under the jurisdiction of the Russian Church Abroad. See Biography of Archbishop Kirill {Yonchev}). In 1982, then Archbishop Valerian left the United States to avoid deportation for alleged fascist activities with the Iron Guard during World War II in Romania. He settled in Portugal, where he reposed in 1987.

Bishop Teofil assisted Archbishop Seraphim (Ivanov, 1897-1987) of Chicago, Detroit, and Midwest America consecrate a bishop for the Greek Old Calendar Church, Bishop Akakios (Pappas) the Elder, of Talantion, on 19 Dec 1960. He also assisted Saint Archbishop John to consecrate a bishop for the Western Rite French Orthodox Church in 1964, Bishop Jean Nectaire (Evgraf Evgrafovich Kovalevsky, 1905-1970) of Saint Denis. ‘Metropolitan’ Pangratios (Vrionis, of ill repute) claims Bishop Teofil was one of his co-consecrators in 1970; however, there were no witnesses to this ‘event’ other than Pangratios and those he claimed consecrated him. Conveniently, all were deceased when Pangratios revealed their names. During the conference of the academic society Daco-Romania, on 6 Dec 1970, Bishop Teofil commemorated Pope Paul VI and the Romanian Uniate Bishop Basile Cristea, who attended the Liturgy, during the Great Entrance. He also commemorated among the reposed the deceased Romanian Uniate Bishop Jules Hossu of Cluj-Gherla. When Metropolitan Philaret (Georgy Nikolaevich Voznesensky, 1903-1985), First Hierarch of the Russian Church Abroad, demanded an explanation, Bishop Teofil attempted to justify his actions by claiming that he had done it ‘in the name of ecumenism and as part of the fight against the Patriarchs of Moscow and Bucharest, who have appropriated the point of view of the regime and are without faith and are even criminals, in that they have perpetuated the assassinations and the persecutions against the Greek Catholic [Uniate] Church of Romania, under the false pretext of aiding their integration into the Orthodox Church.’ Having been reproved by the Synod of the Church Abroad [it might be explained here that the Romanian Diocese of the Church Abroad, as well as the Bulgarian Diocese under Bishop Kyrill (Yonchev, later joined OCA, 1920-2007), and the American Orthodox Mission under Archbishop James (Toombs, +1970) of Manhattan, were all granted a wide ranging autonomy], Bishop Teofil ‘evolved in a manner more and more contradictory.’ Which led him to the point where, on 17 Jan 1972, he petitioned Patriarch Justinian (Ioan Marina, 1901-1977) of Bucharest and Romania (whom he had condemned as without faith and a criminal a year and a half before) to be received into the Romanian Patriarchate. The Romanian Patriarchate accepted him on 10 Mar 1972; on 23 Apr 1972, Bishop Teofil signed a pastoral letter in which he reaffirmed his faithfulness to the Russian Church Abroad. On 8 May 1972, he went to the Uniate Monastery at Chevetogne, France, to greet the visiting Patriarch Justinian, and on the following day, wrote to his diocese that he was, ‘henceforth, after years and years of going astray, once again in the bosom of the Mother Church.’ The Council at his Cathedral notified Bishop Teofil they ‘no longer depended on him,’ and on 21 May 1972, Metropolitan Philaret came from New York to celebrate the Liturgy and to announce that he had ‘received the Diocese and all its parishes under his direct authority.’ The Synod of the Church Abroad deposed Bishop Teofil and reduced him to the monastic state for participating in the consecration of a deposed priest, Bishop Germain (Gilles Bertrand Hardy), as a Bishop for the French Orthodox Church (two Hierarchs from Romania also participated in the consecration, Nicolae {Corneanu, b.1923; Met. Nicolae was the center of controversy in May 2008 when he received communion from a Romanian Uniate Bishop at the consecration of the new Uniate Queen of Peace church in Timisoara, Romania}, Archbishop of Timisoara and Metropolitan of Banat, and Bishop Anthony of Ploesti). In Dec 1974 the Romanian Patriarchate elevated Bishop Teofil to Archbishop. Totally cut off from the Romanian emigre community in Paris, Teofil, able to speak to one of his former priests, admitted he had committed a grave error in leaving the Church Abroad, and further, said that he had become a hostage of the Securitate, the Romanian equivalent of the KGB. He died on 9 May 1975, and was buried, due to the efforts of Archpriest Michel Constandache, in the Parisian Cemetery of Montparnasse, next to the grave of Metropolitan Visarion (Puiu).