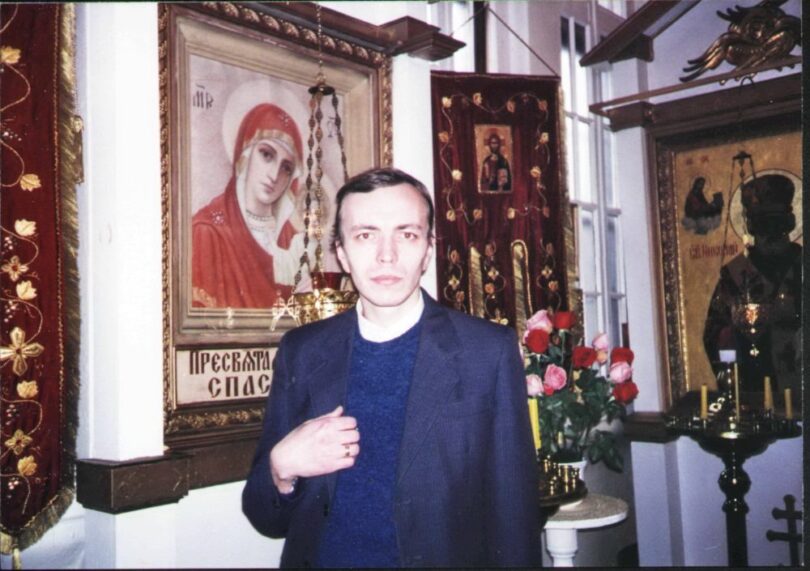 At the Church of Joy Of All Who Sorrow, Philadelphia, Dec. 1997

Please tell us how you came to study the history of the Russian Church Abroad.

In 1997, I came to the USA for a semester-long IREX exchange. The exchange was from August-December 1997 at Villanova University near Philadelphia, Pennsylvania. Even though I had attended an Orthodox Church under the Moscow Patriarchate in Nizhny Novgorod, I was determined to find out about the life of the Russian emigration. At the time, I did not have any conception of the Russian emigration. I had imagined the Russian Church Abroad as a part of the Old Russia, of “White Russia”, and as preserving monarchistic ideals and an Orthodox way of life.

With this academic and personal goal in mind, I started taking a commuter train every Sunday to the ROCOR church in Philadelphia dedicated to the icon of the Mother of God Joy of All Who Sorrow. The rector of the church, Fr. Athanasy Mastalsky, greeted me without any prejudices, while showing an interest in my life history. I did not sense any psychological barrier. By attending Liturgy at this church, I began to find out how services are served in the Church Abroad. I did not notice any differences in liturgical praxis and was dumbfounded at why we could not be in eucharistic communion with each other.

In the Philadelphia church, I met members of the second, postwar “wave” of emigrants, among them vlasovtsy [members of General Vlasov’s “Russian Liberation Army” —trans.], and I gradually began to have the idea of writing surveys or even a book about the Orthodox clergy who cared pastorally for Russian people during the German occupation and in DP camps, as well as those in anti-Soviet military units during the Second World War. But this task required original sources. The reminiscences of émigrés alone did not suffice, and I was insistently recommended to visit the monastery in Jordanville.

Later, in November 1997, with Fr. Athanasy’s blessing and permission from the administration of Villanova University, I made a pilgrimage to Holy Trinity Monastery in Jordanville. There, I saw the monastery services, which were, of course, distinguished from those of ordinary parishes by their great asceticism. In the monastery, I met monk Vsevolod Filipev, who arranged a meeting with Archbishop Laurus, the future First Hierarch of the ROCOR. This meeting doubtless made a huge impression on me that has lasted all my life. Vladyka Laurus treated me with monastic simplicity, without haughtiness or self-importance. He welcomed me, a pilgrim from Nizhny Novgorod, and gave me as a gift a book about deportations of Russian DPs to the Soviet Union from 1945–1949.

What works have you published on the history of the Russian Church Abroad?

Other works can be downloaded here: http://www.intregion.narod.ru/dialogue/rz.html. As you can see from the bibliography above, an initial interest in the War and in Orthodox life in the occupied territories was gradually succeeded by an interest in the work of clergy in DP camps.

Do you not think that your works have a certain tendency to idealize the clergy of the Russian diaspora, such that some of your articles lean more towards hagiography than historical realism?

I do. Initially, I did idealize the Russian Church Abroad. This was due to the fact that the ROCOR was free. She was not persecuted by anyone. None of her priests were executed or sent to the camps of the GULAG. The ROCOR could freely catechize, missionize, and publish spiritual literature. The Church Abroad rightly became the nucleus of the public life of the Russian Emigration in various countries. At the time, though, I did not have a sufficient appreciation for different “branches” of the Church outside of Russia—for example, for the role of what is now the Orthodox Church in America (OCA).

The one thing that I could not accept was the negative attitude of certain émigrés, including some clergy, towards any representatives of the Soviet world, including the clergy and laypeople of the Moscow Patriarchate (MP). For example, I could not understand why the churches of the MP were declared to be “without grace”. When I visited ROCOR churches in San Francisco, Philadelphia, Novo-Diveevo, and Jordanville, and the farm of the Russian-American United Mutual Aid Society (ROOVA), I witnessed a completely different attitude on the part of ordinary priests with respect to those coming from Russia—a Christian attitude.

In time, my idealization of the ROCOR waned and I began to see problems—indeed, very serious ones—in the activities of the Russian Church Abroad. These problems did not concern grace, which, of course, continued to be saving for the Russian emigration. Rather, they had to do with various extreme tendencies in the political life of the emigration, with political biases that had a direct impact on the actions and stance of the ROCOR and her Synod of Bishops.

At the same time, no-one will negate or efface the struggles [podvigi] of those priests who, despite the circumstances of the War, the time in the DP camps, and the comfortable conditions of life in the USA and Canada, continued to “be all things to all”, that they might, by all means, save some. [cf. 1 Corinthians 9:22 —trans.]. What is more, the list of these strugglers [podvizhniki], of priests and bishops, is very long and will not fit into a single interview. It did not even fit into my dictionary DP Clergy.

What are your plans for future research?

At present, I am working on two research projects. The first is studying the work of the clergy in the DP camp in Schleissheim in Bavaria. Schleissheim was the largest camp for Russian DPs in postwar Germany. Among those living and serving there were two bishops and a dozen or more priests, not counting those who traveled there for the patronal feasts, such as Metropolitan Anastassy (Gribanovskii), President of the Synod of Bishops; Metropolitan Seraphim (Lade); and Archimandrite Averky (Taushev). The Kursk Root Icon of the Mother of God of the Sign, the Guide of the Russian Diaspora, was brought to the camp.

The second project is on the life of the Archbishop Andrei (Rymarenko) of Rockland, a distinguished archpastor of the Russian Church Abroad. His life as a whole has not been studied. There are only isolated “sketches”. Archpriest Adrian Rymarenko (in monasticism, Archbishop Andrei) was a spiritual son of Elder Nectarius of Optina. He served in a semi-catacomb setting in Kiev, later under the German occupation, and then in Berlin as the bombs were falling in 1943–1945. He organized an Orthodox community in Wendlingen near Stuttgart in postwar Germany. His final podvig was creating and protecting Novo-Diveevo monastery in New York in far-off America. A cemetery was also created there, where hundreds, if not thousands of Russian émigrés have found their final resting place. You see, here we again have a podvizhnik—I am not saying ‘a saint’, for I dare not speak, not knowing the Judgment of God—but nonetheless a podvizhnik, I can say this without idealizing things. I try to keep to the facts.

I should like to use the opportunity to say that it is quite difficult for a Russian historian to search for facts. Written sources on the history of the ROCOR must of course be analyzed critically and fact-checked. What then can be said about oral sources, such as the reminiscences of émigrés? The reminiscences, interviews, and letters of modern émigrés, of course, bear the seal of subjectivity. A historian must be very careful here.

What is it about the Russian Church Abroad in particular that you find attractive?

The ideals of the ROCOR are closely correlated with those of the Russia of the past. Archimandrite Konstantin Zaitsev from Jordanville wrote and thought a lot about this. These ideals include faithfulness to Orthodoxy, to Sacred Scripture and Tradition, and to monarchism, among which the idea of the Russian Orthodox monarch “preserving the world from evil” has a special place. The ROCOR declared its faithfulness to these ideas when it was not possible to speak about them in the USSR. The ROCOR was a witness to the Russia of the past during a time of deep apostasy in the USSR.

Historically, there is another phenomenon that took shape in the ROCOR. This is the ready availability of the clergy to the laity. Among other things, this is surely due to the fact that clergy and laity often endured the same problems, carried the same burdens, and were saved together in the most direct sense of the word. In addition, one must keep in mind that the scale of things and the number of Orthodox outside of Russia are completely different than they are in Russia. In our cathedral churches, as you know, a huge number of faithful come to the services on Sundays and feast-days. What talk of “availability” can there be here! One must pity our priests. Of course, things are different in rural churches or small city churches, were parish life can be organized in a more deliberate manner.

However, the availability of ROCOR clergy also has its risks. In Russia, priests are treated almost as though they were saints, whereas outside of Russia, one sees pointed disputes between laity and priests as well as open letters. One need only consider what the late Bishop Mitrophan (Znosko-Borovskii) of Boston was forced to endure from some of his parishioners in Brest, Morocco, and Sea Cliff…

Please share your impression of the nature of the history of the Russian Church Abroad that has taken shape during your research.

The history of the Russian Church Abroad comes across as complex and multifaceted. It has many levels and is not as linear as I considered it to be when I first began my research in the mid-1990s. Questions of time must be taken into account. The Kingdom of Serbs, Croats, and Slovenes was one thing, Harbin and China in the interwar era was another, the DP era was a third, and the period from the 1950s–1980s was a fourth. Then came the collapse of the USSR, and the 2007 reunification of both parts of the Russian church. Another dimension is the geographical expanse over which the ROCOR operated. Australia is different, of course, from Argentina, as is Germany from Canada. In Peru, as I recall, there is only one church community with a visiting priest, whereas in the United States, there are dozens of churches that are flourishing liturgically. Each ROCOR diocese has its own podvizhniki from the ranks of both the clergy and the laity. All of this must be studied, not because it is “necessary” to do so, but rather because it is a form of experience. A rich experience that will benefit us, as well. Thus, one ought to admit that the history of the ROCOR is a part of the history of the Russian Orthodox Church, part of the great history of Russia.