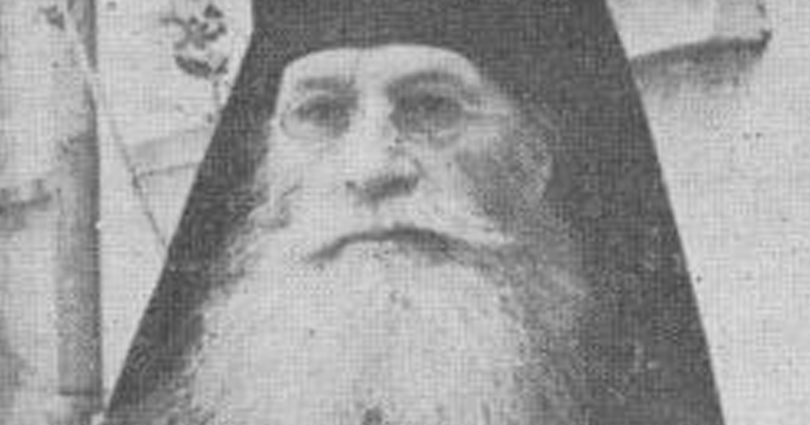 Archbishop Ieronim was born on 29 Nov 1878 in the small town of Sudodge in the Vladimir Province. He was named Ioann in Holy Baptism. His father was a bookkeeper in the Exchequer. When Ioann was preschool age, the family moved to Vladimir on the Klyazma.

Archbishop Ieronim was born on 29 Nov 1878 in the small town of Sudodge in the Vladimir Province. He was named Ioann in Holy Baptism. His father was a bookkeeper in the Exchequer. When Ioann was preschool age, the family moved to Vladimir on the Klyazma. Due to the beneficent influence of his pious mother, the young Ioann was educated in spiritual schools. From 1895-1896, he studied at the Vladimir Theological Seminary. The rector of the school was Archimandrite Nikon (Nikolai Andreevich Sofiisky, 1861-1908, later Abp. of Kartalinsky & Exarch of Gruzia), and the Inspector was Archimandrite Evlogy (Vasily Semenovich Georgievsky, later Metropolitan of Paris & Western Europe, Exarch of Western Europe of the Patriarchate of Constantinople/concurrently Exarch of Western Europe of the Moscow Patriarchate, 1868-1946).

From 1895 – 1901, he was Psalomschik, and taught the Law of God in the village of Malahovo. 28 Apr 1902 he was ordained deacon, and 5 May 1902 was ordained priest, and assigned as rector of a parish, where he served for 6 years. With the assistance of relatives and the Rector of the Vladimir Seminary, Archimandrite Nikon (Sofiisky), he was able to further his studies at the Moscow Theological Academy beginning in 1909. On 3 Nov 1912, he was tonsured a monk by the Rector of the Academy, Archimandrite Feodor (Alexander Vasilievich Pozdeyevsky, 1876-1937. Later Archbishop of Volokolamsk, in schema, Daniil, one of the Holy New Martyrs of Russia), and given the name Ieronim. In 1913 the newly tonsured Hieromonk Ieronim finished the Moscow Theological Academy with a Masters of Divinity.

In 1914 he taught Sacred History at the Kursk Theological Seminary. On 9 Oct 1915, he was appointed Inspector of the Kursk Theological Seminary, a post which he remained at until the Seminary was closed by the bolsheviks in 1919. In 1918 appointed Deputy Abbot of the Kursk Znamensky Monastery, where the Holy Kursk Root Icon of the Mother of God of the Sign was kept. He was also Secretary to the ruling Bishop of the Kursk-Oboyansk Diocese, and Abbot of the Kursk Znamensky Monastery, Bishop Feofan (Fedor Georgievich Gavrilov, 1872-1943). In 1919, he was elevated to Archimandrite and left Kursk with Bishop Feofan. Bishop Feofan and Archimandrite Ieronim secretly took the Kursk Root Mother of God Icon of the Sign from Kursk to save it from destruction at the hands of the bolsheviks. They travelled through the south of Russia, Constantinople, Thessaloniki, arriving safely in Yugoslavia in Mar 1920.In the early 1920’s, Archimandrite Ieronim served in several parishes of the Serbian Orthodox Church, and taught in a monastic school in Rakovica, near Belgrade.

In 1924, he was appointed Head of the Russian Ecclesiastical Mission in Jerusalem; he served in that capacity for one year, and then served as a clergyman in the REM until 1935, at which time he was invited to the United States by Bishop Vitaly (Vasily Ivanovich Maximenko, 1873-1960) of Detroit (later Archbishop of Jersey City and Eastern America).On 18 Aug 1935, he was consecrated to the Episcopate as Bishop of Detroit & Cleveland. There was some controversy surrounding his consecration; Metropolitan Feofil (Feodor Nicolaevich Pashkovsky, 1874-1950) of America and All Canada, was against the consecration; consequently, all Bishops of the North American Metropolia refused to participate. Patriarch Alexander III of Antioch (167th Patriarch of Antioch, serving from 1928 to 1958. Responsible for revival of churches, monasteries, and the Patriarchal Theological School at Balamand, and approved the use of the Western Rite throughout his Patriarchate) ordered Archbishop Theodosius (Tahan) of Tyre & Sidon, Metropolitan of All Jordan, of the Antiochian Patriarchate, to preside over the consecration. Other Hierarchs participating were Bishop Vitaly (Maximenko), and Bishop Ioasaph (Ivan Vasilievich Skorodoumov, 1888-1955) of Edmonton and Western Canada.

When Metropolitan Feofil was informed by Archbishop Vitaly about the congratulations received by the newly consecrated Bishop Ieronim, from Archbishop Adam (Adam Apollinarievich Filippovsky, 1882-1956) of Philadelphia and the Carpatho-Russians, the Greek Archbishop Athenagoras (Aristocles Spyrou, 1886-1972, later 268th Ecumenical Patriarch, from 1948-1972) of North and South America, and Hierarchs of the Orthodox Church of Bulgaria, and the Church of Abyssinia, it became a landmark on the way to the restoration of dialogue between the Russian Orthodox Church Outside of Russia and the North American Metropolia. Later that same year, due to the efforts of Patriarch Varnava (Petar Rosich, 1880-1937) of the Serbian Orthodox Church, the North American Metropolia re-entered the fold of the Russian Orthodox Church Outside of Russia. Soon after the consecration, Metropolitan Theodosius of All Jordan concelebrated the Divine Liturgy with the newly consecrated Bishop Ieronim.

A year after the reunion of the Russian Orthodox Church Abroad and the North American Metropolia, Vladika Ieronim was appointed Bishop of Montreal and Eastern Canada, a position he held until 1946. At the end of 1945, Bishop Ieronim was invited to travel to Geneva, Switzerland by Metropolitan Anastassy (Alexander Alexeyevich Gribanovsky, 1873-1965), First Hierarch of the Russian Church Abroad, to concelebrate the Episcopal Consecrations of the Archimandrites Nafanael (Vasily Vladimirovich L’vov, 1906-1986, later Archbishop of Vienna & Austria) and Seraph’s (Leonid Georgievich Ivanov, 1897-1987, later Archbishop of Chicago, Detroit, and Midwest America). The consecrations took place in Feb 1946; Archimandrite Nafanael was consecrated as Bishop of Brussels and Western Europe, and Archimandrite Seraphim was consecrated as Bishop of Santiago, Chile. Archimandrite Nafanael was consecrated first, then assisted with the consecration of Archimandrite Seraphim. Bishop Nafanael was transferred to fill the post of Administrator of the Parishes in North Africa in 1952, and Bishop Seraphim never took up his post in Chile, but went on to the Holy Trinity Monastery in Jordanvile, New York later in 1946 with the Brotherhood from the Monastery of Saint Job of Pochaev in Ladomirova, Czechoslovakia.

Also in 1946, the North American Metropolia once again seceded from the Russian Orthodox Church Abroad. At the infamous Cleveland Sobor of 1946, the Metropolia, through various manipulations, severed their relationship with the Church Abroad and accepted an “either/or resolution-” either unite with the Moscow Patriarchate, or, if the M.P. does not accept our conditions, govern ourselves until such time as they do accept our conditions. Of course, this uncanonical self-government of the Metropolia lasted until 1970; 24 years “on their own.”

Bishop Ieronim was removed from his Diocese by the Metropolia, and appointed to govern the Church Abroad’s Diocese of Detroit-Flint, consisting of four parishes remaining loyal to the Church Abroad after the schism of the Metropolia. When assuming control of the Detroit-Flint Diocese, Vladika Ieronim was elevated to Archbishop, and in 1953, he was awarded the right to wear the diamond cross on his klobuk for his correct canonical stand during the 1946 Cleveland Sobor. Archbishop Ieronim reposed on 1/14 May 1957. At that time, his small diocese was incorporated into the Chicago-Cleveland Diocese ruled by Archbishop Grigorii (Georgy Borishkevitch, 1889-1957). The name of the Diocese was then changed to the Chicago-Detroit Diocese.