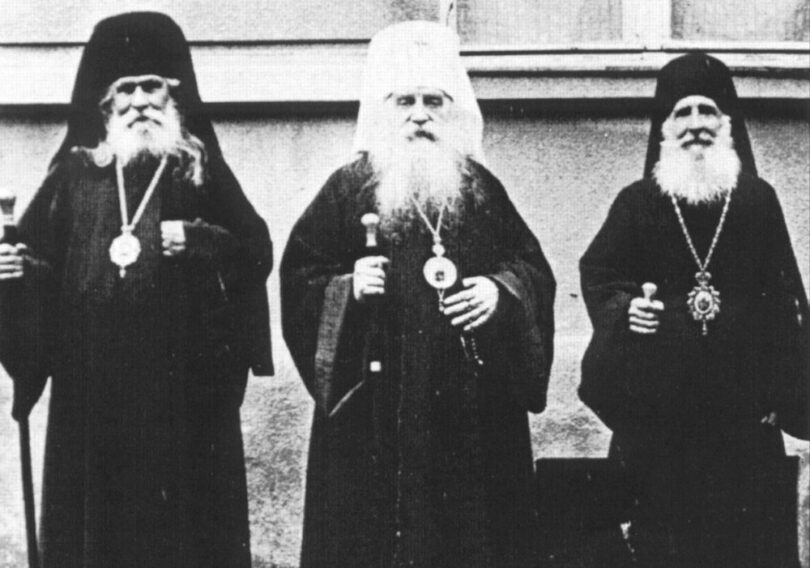 From left to right: Bp Germogen Maximov, Met Antonii, Bp John of Urmia on day of his consecration 1931

Bishop John, in the world Moissey Gevargizov, was born to a Nestorian family in 1855 in the province of Urmia, at that time the northernmost province of Persia, bordering on Russia. At the time of Bishop John’s birth, the once mighty missionary church of the Nestorians, which at its height had reached across Asia from the Middle East to China, was in dire straits.

Bishop John, in the world Moissey Gevargizov, was born to a Nestorian family in 1855 in the province of Urmia, at that time the northernmost province of Persia, bordering on Russia. At the time of Bishop John’s birth, the once mighty missionary church of the Nestorians, which at its height had reached across Asia from the Middle East to China, was in dire straits. Centuries of persecution at the hands of their Muslim overlords had brought the Nestorians to their knees; their numbers had been further decimated by aggressive Roman Catholic and American Protestant missionaries, who sought to convert the Nestorians to the Unia or to “Bible-believing Christianity,” respectively.

In his youth, Bishop John studied for five years at the American Presbyterian Mission School in Urmia and then for another five years at the Anglican Mission School in Urmia, finishing in 1891. In 1889, he was ordained a deacon at the Anglican Mission, for service at that Mission. Although the sources are not clear, he was undoubtedly ordained a deacon of the Nestorian church in 1889, as the Anglicans did not seek to convert the Nestorians, but rather, to educate them and persuade them to abandon their heretical beliefs. If the Anglicans could accomplish this, they then hoped to enter into communion with the “Assyrian Church” (as they would refer to the Nestorians after they had abandoned their heretical beliefs). The Anglicans hoped that such an outcome from their Mission in Urmia would bolster the “branch theory of Christianity,” which was in vogue in Anglican circles at that time. Perhaps then the Orthodox and the Roman Catholics would also subscribe to the branch theory, which would also supposedly raise the status of the Anglicans in the eyes of the Orthodox and the Roman Catholics. In the mid 1890’s, Abun Mar Yonan, the Nestorian Bishop of Urmia, petitioned the Holy Synod of the Russian Orthodox Church that he and his flock be received into the Russian Church. Mar Yonan traveled to Saint Petersburg in 1898, where he and several of his clergy accepted Orthodoxy. They were received into the Russian Orthodox Church by confession of faith and vesting on the Feast of the Annunciation at the Holy Trinity Cathedral in Saint Alexander Nevsky Lavra. The services were presided over by Metropolitan Pallady (Pavel Ivanovich Pisarev-Raev, 20 Jun 1827-5 Dec 1898) of Saint Petersburg. That same year, the future Bishop John accepted Orthodoxy, and was made a deacon by Mar Yonan. Again, the sources are not very clear concerning whether the future Bishop John was also accepted by confession of faith and vesting, or if he was actually ordained by Mar Yonan. Also in 1898, the Holy Synod of the Russian Orthodox Church established the Russian Ecclesiastical Mission in Urmia, in order to aid Mar Yonan in the conversion and education of his flock. The future Bishop John served as a deacon at the Russian Mission in Urmia from 1898 to 1905. He then taught arithmetic, geography, and Church History at the Mission school from 1905 to 1908. In 1907, he was ordained to the priesthood by Abun Mar Elia (Abraham, 1856-Dec 1928), Mar Yonan’s successor as hierarch for the Orthodox Assyrians. From 1909 to 1912, the future Bishop John served as rector of the Church of Saint Ephrem the Syrian in Tiflis, Georgia, a parish established for the Orthodox Assyrians. His wife died in 1911 while they were in Tiflis. From 1912 to 1914, he once again served at the Mission in Urmia; he was evacuated from Urmia in 1914 due to World War I to Erivan, Armenia, where he stayed until 1915. From late 1915 to 1917, he once again served at the Mission in Urmia. In 1918, he was part of the exodus of Christians- Orthodox, Oriental Orthodox, Uniates, and Protestants alike-from northern Persia due to renewed persecution by the Muslims. Over 100,000 Christians fled northern Persia heading south to Iraq; untold numbers were massacred along the way. The Orthodox Assyrians eventually ended up in Baghdad. The future Bishop John almost immediately returned to Urmia, to attend to those Orthodox Assyrians who had not been able to undertake the journey to Baghdad.

In 1921, unable to communicate with Patriarch Tikhon in Moscow, Abun Mar Elia (Abraham) entered into contact with, and joined, the Russian Orthodox Church Outside of Russia. In the mid 1920’s, the future Bishop John was elevated to Archpriest. He was tonsured a monk at the Russian Ecclesiastical Mission in Jerusalem, and was consecrated to the episcopate in 1931 in Belgrade, Yugoslavia, as Bishop or Urmia and Salma, succeeding Abun Mar Elia, who had died in 1928. His consecration was presided over by Metropolitan Antony (Alexey Pavlovich Khrapovitsky, 17 Mar 1863-10 Aug 1936), assisted by Archbishop Germogen (Grigori Ivanovich Maximov, 1861-1945). Bishop John resided in Baghdad where most of his flock lived. He retired due to old age in 1945, and eventually made his way to the U.S., where he lived with his son in Chicago. In the early 1950’s, Bishop Nikon (Nikolai Pavlovich Rklitsky, 4/17 Dec 1892-4/17 Sep 1976, later Archbishop of Washington and Florida), while visiting Chicago, “had a wonderful meeting with Bishop John of Urmia and Salma, the eldest member of our Council of Bishops, and spiritual head of the Orthodox Assyrians.” Vladika Nikon noted that Bishop John spoke the same language as that spoken by Christ the Savior, and had been the translator at the Russian Ecclesiastical Mission in Urmia. After moving to Chicago to live in retirement, he found that there were several thousands of his fellow Orthodox Assyrians, who were spiritually undernourished, living in the Chicago area. When Vladika Nikon visited Bishop John, he found him “surrounded by Americans of Assyrian origin,” to whom Bishop John was reading the Bible in their native language. The Synod of Bishops, through Archbishop Gregory (Georgy Ivanovich Borishkevitch, 18 Apr 1889-13/26 Oct 1957) of Chicago and Cleveland (later of Chicago, Detroit and Midwest America), Protopresbyter Arkadii Tsepuro, Protopresbyter George Pavlovich Grabbe (Later Bishop Gregory of Washington & Florida, 8 Apr 1902-24 Sep/7 Oct 1995), and Protopresbyter Adrian Adrianovich Rymarenko (later Archbishop Andrei of Rockland, 15/28 Mar 1893-7 Dec 1978) arranged for Bishop John to live in retirement at the Novo Diveyevo Convent in Spring Valley, New York. He reposed at Novo Diveyevo in 1960 at the age of 105, and is buried in the cemetery located there.