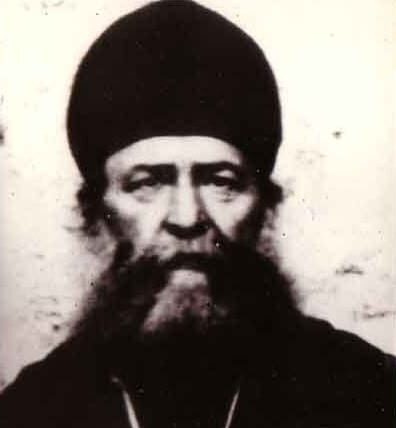 Bishop Mitrophan was born in the Voronezh Province in 1876. After finishing primary schooling, he completed the Voronezh Theological Seminary, and went on to the Kazan Theological Academy, graduating in 1902 with a Masters Degree in Theology and the right to teach in Seminaries.

Bishop Mitrophan was born in the Voronezh Province in 1876. After finishing primary schooling, he completed the Voronezh Theological Seminary, and went on to the Kazan Theological Academy, graduating in 1902 with a Masters Degree in Theology and the right to teach in Seminaries.

We grow richer spiritually in this life through the people God connects us with. This was certainly the case with Bishop Mitrophan and the mentors and classmates he came into contact with at the Kazan Theological Academy. The Rector of the Academy, and later, his ruling bishop when he was a Vicar, was Archbishop Antony (Alexey Pavlovich Khrapovitsky, 17 Mar 1863-10 Aug 1936, later Metropolitan of Kiev & Galich and First Hierarcxh of the Russian Orthodox Church Abroad) of Kharkov & Akhtirsk. One of his classmates was Alexander Ivanovich Smolenets (1873-6/19 Dec 1937), later Archbishop Arseny of Semipalatinsk. Vladika Arseny was described as a person of incorruptible honesty and maximum adherence to principles. He was possessed of outstanding mathematical abilities and a phenomenal memory, and was fluent in French, German, English, Italian, Hebrew, Greek and Latin. He was said to have served majestically and solemnly, and tolerated no compromise in matters of belief. He also attended the SW Russian Sobor in 1919 with Bishop Mitrophan. Archbishop Arseny reposed in retirement at Taganrog in 1937.

Another of Vladika Mitrophan’s classmates was Sergey Andreyevich Vinogradov, later Archbishop Simon of Peking & China (1876-11/24 Feb 1933). Archbishop Simon is one of the most outstanding Hierarchs of the Church Abroad, known as a podvizhnik and an ascetic. He was greatly mourned by the people of his Diocese, and is buried in a crypt close to the tomb of Metropolitan Innokenty (Ivan Apollonovich Figurovsky, 1863-15/28 Jun 1931). His remains were moved in 1940, and it was noted that his body was incorrupt.

Vladika Mitrophan also had classmates that became Martyrs. Vasily Konstantinovich Zverev (18 Feb 1878-7 Feb 1929) was one of these. As Archbishop Peter of Voronezh, he was arrested by the Soviet authorities, and was imprisoned in the former “school for monks,” the Solovki Monastery. Thinking to break the spirit of those imprisoned there by turning the famous Monastery in to a grim Soviet prison, the bolsheviks only bolstered the spirit of those sent there, and turned it into a school for martyrs. Archbishop Peter reposed in Solovki, at the Golgotha Skete, in 1929. His name was added to the list of the New Martyrs of Russia by the Moscow Patriarchate in 2000.

Another classmate, whom Vladika Mitrophan remembered as a “restrained and mild young man” was Peter Petrovich Kedrov (30 Jul 1876-1937), the future Archbishop Pachomy of Chernigov. One night, an oversealous Peter decided to fulfill the Lord’s command: “If thy thy right eye offend thee, pluck it out,” (Matthew 5:29) and attempted to burn out his eye with a candle. Trying to endure the pain by grinding his teeth, his roommate, Vasily Maximenko (the future Archimandrite of Pochaev, Abbot of Ladomirova Monastery in Czechoslovakia, printer, missionary, laborer for Church unity, Archbishop Vitaly of Eastern America & Jersey City, 1873-1960, ) woke up, and raised an alarm which saved Peter Kedrov’s eye. In 1937, then Archbishop Pachomy met a martyr’s death at the hand of the bolsheviks.

The future Bishop Mitrophan, after graduating from the Imperial Kazan Theological Academy, was undoubtedly prepared for his life of dedication to the Russian Church, not only by the education he had received at the Academy, but also by the contact with his classmates, growing spiritually together at the Academy. The future Bishop Mitrophan made use of his degree upon graduation, and taught at the Orlovsky Seminary until 1904. At that time, he was appointed Diocesan Missionary (the Kazan Academy was known for its instruction for Missionaries) for the Volhynia Diocese. Archimandrite Antony (Alexey Pavlovich Khrapovitsky, 17 Mar 1863-10 Aug 1936, future Metropolitan of Kiev & Galich and First Hierarch of the Russian Orthodox Church Abroad) was Rector of the Kaqzan Academy during Vladika Mitrophan’s time there as a student, and then Bishop Antony (Khrapovitsky) was the ruling Bishop of the Volhynia Diocese who uindoubtedly appointed the future Bishop Mitrophan to ther post of Diocesan Missionary.

In 1907, Nikolai Abramov was tonsured a monk with the name Mitrophan. He was ordained a hieromonk the same year, and was elevated to Archimandrite in 1910. As Diocesan Missionary, in 1911, he petitioned for the ordination to the priesthood of Arkady Iosifoivich Ostalsky, the son of a priest and graduate of the Volhynia Theological Seminary. The petition was granted, and the ordination took place on 14 Sep 1911. The priest Arkady Ostalsky later became Bishop Arkady of Bezhetsk, and was shot by the NKVD on 29 Dec 1937.

The Sumy Vicariate of the Kharkov Diocese had been founded in 1866, and Bishop Mitrophan was the seventh Bishop to hold the title “of Sumy.”  Three more Bishops were consecrated as Bishops “of Sumy” after Bishop Mitrophan, then in 1945, the vicariate was abolished, and Sumy was made a Diocese, with the name Sumy & Akhtirsky. The city of Sumy, roughly the center of the Diocese, is located approximately 75 miles northwest of Kharkov. Sumy was founded in 1652 at the bank of the Psel River (a left tributary of the Dnieper) as a Cossack fort to protect from attacks of the Crimean Tartars. After the Tartars were pacified, Sumy was incorporated into the Russian Empire and became an important economic center, with the Holy Transfiguration Cathedral dominating the town center. The Cathedral was the subject of major repairs twice in the 19th century. Vladika Mitrophan was not to stay a very long time in Sumy: in 1920, he emigrated to Yugoslavia.

In 1920, Metropolitan Antony (Khrapovitsky) had also emigrated to Yugoslavia, as had members of the Higher Church Authority from the South Russia Council; after several Bishops arrived in Yugoslavia, the HCA transformed itself into the Synod of Bishops of the Russian Orthodox Church Abroad. In 1921, the first Council of the Church Abroad, the “Karlovtsy Council,” was held, and set the foundations for the  Russian Orthodox Church Outside of Russia.

After the Council, Bishop Mitrophan served for the Serbian Church in various places, and finally retired, first to the Rakovica Monastery near Belgrade, buiilt in the 16th century. It is the burial place of many members of Serbian Royalty, and recently Patriarch Pavle of Everlasting Memory was buried there. From Rakovica, Bishop Mitrophan went to the Decani Monastery,  more secluded than Rakovica, built in the province of Kosovo & Metohija in the mid 14th century. Decani is the Serbian Lavra, home to many Serbian Saints and Martyrs, and the site of persecution and terrorism against the Serbs and Orthodoxy by radical Isalmist Albanians in recent years.

For several years, Vladika Mitrophan was the director of a monastic school at the Decani Monastery, which at times had up to 120 students. In 1944, Vladika Mitrophan took the Great Schema, with the name Makary. Having taken upon himself the final step in the angelic life, with the hope of greater closeness to his Lord and God, Vladika Mitrophan reposed in the lord soon afterwards, in November, 1944. He is buried in the Iveron Chapel in the Belgrade Cemetery, the resting site of Metropoloitan Antony (Krapovitsky), as well as many other clergy of the Russian Church Abroad who reposed in exile from their homeland.