Archbishop Damian (Dimitry Grigorievich Govorov, 11 Feb 1855-6/19 Apr 1936) of Tsaritsyn was born on 11 Feb 1855 to the family of priest. After concluding his studies at the Ekaterinoslav Seminary, in 1878 he began teaching at the Simferopol Spiritual School. Spiritual Schools were secondary schools, and a preparation for attending a Seminary. Archbishop Damian taught Russian and Slavonic in Simferopol, and after a year was ordained a priest for service in the Simferopol Spiritual School. After four years in Simferopol, Vladika Damian was appointed to the Kerchensk Women’s School of the Department of Establishments. He also served in the Cathedral in Kerchensk, and served in other churches in the city, and was elevated to Archpriest. After ten years in schools, he was known as a “dear and recognized teacher.” In 1904, he was transferred to the Saints Peter and Paul Church in Kharkov.

In 1907, the future Archbishop began studies in the Kiev Theological Academy, which resulted in his graduation with a Master’s Degree in Theology in 1911. On October 5, 1911, he accepted monastic tonsure at the hands of Metropolitan Flavian (Nikolai Gorodetsky, 26 Jul 1840-9 Nov 1915) of Kiev & Galich in the Kiev Caves Lavra. In December of the same year, Hieromonk Damian was appointed as rector of the Kishinev Seminary, and elevated to Archimandrite. While he was rector of the Kishinev Seminary, he also was editor of the Kishinev Diocesan periodical, as well as the magazine, “Works of the Bessarabian Archaeological Society.”

In 1916, Archimandrite Damian was consecrated to the Episcopate as Bishop of Erivan, Vicar of the Georgian Exarchate. His consecration took place in Tiflis, Georgia. During his time in Georgia, he also worked in the office of the Exarxchate’s Synod. After the February Revolution, as did many Bishops of the Russian Church, Bishop Damian, along with his ruling Bishop, Archbishop Platon (Porfiry Fedorovich Rozhdestvensky, 23 Feb 1866-7/20 Apr 1934; later head of the North American Metropolia) of Kartalinsk & Kakhetinsk, Exarch of Georgia, together served a moleben in Tiflis for the success of the new (Provisional) government. After these molebens, the citizens often swore allegiance to the new government.

In July of 1917, Bishop Damian was appointed as Bishop of Petrovsky, a Vicar of the Saratov Diocese. Saratov is a major city in southern Russia and a major port of the Volga River. The region of Saratov is one of the largest in European Russia. The ruling Bishop was Bishop Dosifey (Dimitry Alexeyevich Protopopov, 16 Oct 1866-12 Mar 1942 of Saratov & Petrovsk.

Petrovsk was named after Peter the Great. The name of the Diocese had been change from Saratov & Akhtirsk to Saratov & Petrovsk in 1917; Bishop Damian may have been the first Bishop of Petrovsk. The principal monastery of the Diocese is the Holy Transfiguration Monastery. Bishop Damian wrote a history of the Monastery in 1918, entitled: “История Спасо-Преображенского мужского монастыря в городе Саратове” (“History of the Holy Transfiguration Men’s Monastery in the city of Saratov”), which was published by the Monastery. In the book, he wrote that “the attitude of believers to a Monastery is very clearly expressed in their celebration of the Monastery’s Feast Day. On this day, at this Monastery, tens of thousands of people gather, processions from all the parishes in town converge at the Monastery, people praying all the way. The entire Monastery is filled with people.” He further stated that this Monastery has been built “not by princes and boyars, but by tears and prayers; rich men have not enclosed it in gold and silver, but it was created on the mites of pious Christians.” The Monastery was also important to Saratov as the location of the principal cemetery of the city.

In Petrovsk, Bishop Damian was confronted with the problem of the Removationists attempting to “correct” Bishop Dosifey. Bishop Dosifey “personified traditional Orthodoxy, and Bishop Damian was wholly with him.” The troubles with the Renovationists finally were resolved, but more troubles were to come. In his New Year’s Homily to his flock, Bishop Damian told the people they must “struggle against the horror of unbelief, plunder, violation of rights, the destruction of the Holy Relics of Russia, and the enemies of the Orthodox Church.” In 1918, the Tsaritsyn Vicariate was created for the Saratov Diocese, and Bishop Damian was appointed as the first Bishop to hold the post, and entrusted to turn the Vicariate into a Diocese. A Diocesan Management office was formed to that end.

As the first news of martyrdoms, and the execution of the Royal Family reached Saratov, the priests of the Diocese held a “doleful” pannikhida for the murdered Sovereign and his family. This pannikhida was labeled as “anti-soviet propaganda” by the bolsheviks, and the priests, along with their defender, Bishop German (Nikolai Vassilievich Kosolapov, ?-27 Sep 1919) of Volsk, another Vicar of the Saratov Diocese, were classified as “irreconcilable enemies of the workers and peasants authority.” As a result, Bishop Herman, priests Platonov and Shansky, chairman of the Union of the Russian People Karpenko, and police office Tsarevsky were all shot to death.

Bishop Damian was not involved in the trial, as Tsaritsyn was not yet under the authority of the “workers and peasants.” But Vladika Damian’s work was, a short while later, disturbed by the approach of the bolsheviks on Tsaritsyn. On the order of the Military Authority in Tsaritsyn, Bishop Damian and most of the clergy were evacuated to Stavropol, where they stayed from Aug to Oct 1919. Bishop Mikhail (Mikhail Ivanovich Kosmodamiansky, 1858-11/24 Sep 1925) the acting bishop of Stavropol, as Vladika Damian verified, treated the refugees with “attention and courtesy,” accommodations for up to 200 people, and a church in which to hold services, as well as additional accommodations in other cities of the Diocese. The Higher Church Authority of South Russia opened for the refugees a Pastoral Theology School with a 4 year curriculum, with premises, textbooks, and manuals being given by the Stavropol Seminary, 100,000 rubles were donated by the Don Government, and Bishop Damian was named as Rector of the school. All this only lasted a month and a half, when the bolsheviks were driven from Tsaritsyn, and the school was transferred there with the return of the refugees.

The second evacuation of the Tsaritsyn clergy under the authority of the White Army was in 1920, and this time the refugees went to Rostov-on-Don, the Crimea, settling in Sevastopol. The military authorities asked Vladika Damian to help the refugees, and a brotherhood of Saint Vladimir was created to do that. The plans were that this brotherhood would accompany the White Army on its victorious march to Moscow, where the brotherhood would be blessed by Patriarch Tikhon. So, there was no doubt by the White Army authorities in Sevastopol , and Bishop Damian, that, not before long, the nightmare of the bolsheviks would be relegated to history. This was not to be, and an emergency evacuation from Sevastopol was ordered in November, 1920. The first stop for the evacuees was Istanbul, where Bishop Damian continued the work of the Brotherhood of Saint Vladimir, and participated in missionary work and church services. He conducted services in the Greek Churches, and rented premises in Istanbul for a school and dining room for the children of the refugees. In Sundays and holidays, he conducted services in the Russian Ambassadorial Church, and also in the American shelter for Russian Children. The Russian Church Authority and the Embassy in Istanbul would not give permission for Bishop Damian to open his Pastoral Theology school,, so he sought permission elsewhere.

In 1921, Bishop Damian transferred his activities to Bulgaria, where the Holy Synod had given him the use of the Monastery of Saints Kirik and Julitta in the mountains of Rhodope, near the city of Asenovgrad (Stanimaka). Restoration and remodeling work was paid for by General Wrangel, the Great Princess Maria Fedorovna, and even Protestant churches-Bishop Damian refused no assistance. On 24 Jul 1922, Bishop Damian opened his Pastoral Theology school. The first students were former members of the White Army, who now hoped to help Russia and the Russian Church with education, not violence. Among them was the Russian General Ioann Solomatin, who later became a priest in a Bulgarian Monastery. Another student was Mikhail Vladimirovich Yaroslavtsev (1883-1954). He was from a family of soldiers in the Tula Province, and after a military education and career, served in World War I as the commander of two divisions. He participated in the creation and field operations of the NW Army near Petrograd. In 1920 he was promoted to Major General, and commanded three divisions. In the emigration, he was interned in Poland, spent time in Germany, and worked as a concierge, in a Citroen factory, a driver, and in the book trade in France. In 1935, he entered the Pastoral School of Bishop Damian, and was educated further at the Theological Faculty of the University of Sofia. He was ordained a priest in 1937, tonsured a monk in 1940, taking the name Mitrofan, elevated to Igumen in 1945, and Archimandrite in 1949. He labored in the Holy Trinity Church in Morocco, built for Russian emigres who worked in a phosphate factory. He reposed in 1954, and was buried in a Christian cemetery in Rabat, Morocco. 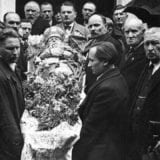 One of the faculty of Vladika Damian’s school was Archimandrite Feodosy (Konstantin Zakharievich Almazov, 21 May 1870-?) who had been born in the Smolensk Guberniya in the family of a priest. He was educated in the Smolensk Seminary and the Moscow Theological Seminary, earning a Master’s Degree in Theology in 1896. He was tonsured a monk in 1903. He had served in the Don Monastery, and was rector of the Sobor of the 12 Apostles in the Moscow Kremlin, and eventually imprisoned in the Solovki (Monastery) concentration camp by the bolsheviks. He left the USSR in 1930. He was rector of a Greek Church from 1930-1932, when he moved to Bulgaria and was an instructor at Vladika Damian’s Pastoral Theology School. It is not known where he went after leaving the Saints Kirik and Julitta Monastery. Other faculty of the Pastoral Theology School were B.V. Ostroumov, V.I. Lazarev, K.I. Omshansky, Priest E. Cherepovetsky, Bishop Tikhon (Timofei Ivanovich Lyashchenko, 1875-11 Feb 1945, of the Russian Church Abroad) of Berlin, and Metropolitan Ilarion of Slivensk of the Bulgarian Church.

Vladika Damian’s students prayed, studied, restored buildings, kept cows, sheep, chickens, bees, sowed, ploughed, harvested, cleaned wheat, built a mill, milled flour, worked on vineyards, assisted the poor, orphans, the aged, and those in schools, hospitals, and prisons. All were members of the Saint Vladimir Brotherhood, which Vladika Damian headed for the remainder of his life. The educational and economic activity in the Monastery and School promoted development and the moral regeneration of the Russian emigrants who lived nearby.

Vladika’s students, on congratulating him on his name’s day, noted that he had made the Monastery of Saints Kirik and Julitta “a bright flame of one of the centers of Russian Spiritual culture.” In 1931, the Sobor of Bishops of the Church Abroad elevated Vladika Damian to Archbishop, and Tsar Boris III of Bulgaria gave him a citizenship award. Archbishop Damian of Tsaritsyn reposed in the Lord on 6/29 April 1936. He is buried in the Russian Cemetery in Sofia, Bulgaria.

The Monastery of Saints Kirik & Julitta was built in 1835, on the site of a monastery that had burnt. In mid courtyard is the Church of Saint Paraskeva, built in 1850, surrounded by the buildings holding the cells of the monks. In the Church are kept Icons of the Bulgarian Master Icon painters Zakharia of Zographou and Alexi Atanasov. Approximately 500 km SE of the Monastery site is the source of the stone used in building the monastery. Today, the former Monastery and Pastoral Theology school of Archbishop Damian is home to the “recreation center, and business tourism creative base of the Bulgarian Union of Architects.” It is located about 3 km from Asenovgrad.

The Feast Day of Saints Kirik and Julitta is celebrated by the Holy Church on July 15/28, interestingly enough, the same day that the feast of Saint Vladimir is celebrated. The Holy Saints suffered martyrdom in 305.