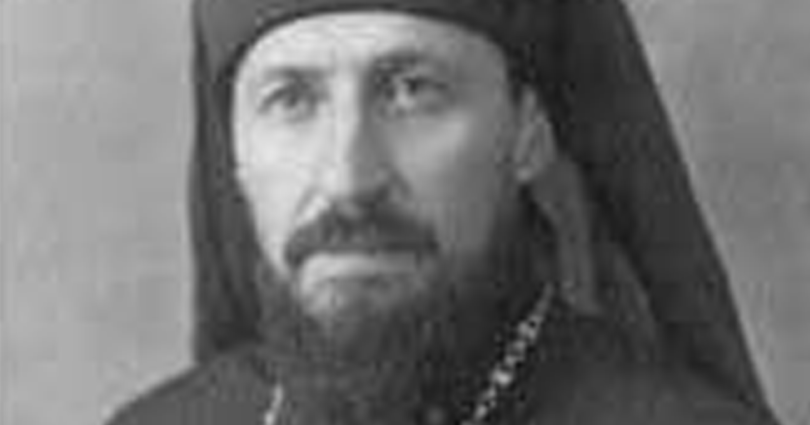 The future Bishop Philip was born at the Gardner family estate near Sevastopol on the Crimean peninsula. The Gardner family was Scottish in origin, and Francis Gardner, a prominent Scottish shipbuilder, had been invited to come to Russia by Peter the Great, on very generous terms.

The future Bishop Philip was born at the Gardner family estate near Sevastopol on the Crimean peninsula. The Gardner family was Scottish in origin, and Francis Gardner, a prominent Scottish shipbuilder, had been invited to come to Russia by Peter the Great, on very generous terms. Francis helped build up the Russian Navy for war against the Swedes, and was granted hereditary nobility.

Francis Gardner introduced the manufacture of fine china to Russia. To this day, “Gardner porcelain” is praised among the collectors of fine china. The Gardner family became extremely wealthy due to its ventures into the porcelain business, as well as building and operating sugar refineries, and several other factories in Ukraine and the Crimea.

The first porcelain factory of Francis Gardner was founded in Verbilki in 1766 (the date is contested: other authorities claim 1756, 1759, 1761). Francis Gardner purchased land for the porcelain factory from Duke Nikolai Urusov in the Dimitrov District, with deeds presented to the Manufacturing Board in March, 1766. The porcelain business, which was later comprised of several factories, became known for the superior quality of its products, as well as the production of unique, treasured pieces.

The business created many pieces for various Emperors and Empresses of Russia, as well as the Russian Government, winning commissions to create medals and other pieces. The business remained in the Gardner Family until it was sold in 1891, to Matvey Sidorovich Kuznetsov. The business was nationalized and taken ov er by the State immediately after the bolshevik revolution. The factory eventually became the Dimitrov State Porcelain Factory, and eventually the quality of the work diminished. To this day, however, original Gardner porcelain pieces are of great value in the antique market. The wealth of the Gardner family, greatly contributed to by the porcelain business, created valuable opportunities for the future Bishop Philip. Ivan Alexeyevich Gardner, the future Bishop Philip, was born on 09 Dec 1898 to the family of Alexey Gardner, a lawyer. In 1912 he entered the Imperial Lyceum in Moscow. During his youth, he visited the Kiev Caves Lavra, the Holy Trinity-Saint Sergius Lavra, and Sarov with his mother. He soon began to participate in church choirs, and began to seriously study Russian Church Music (both practical and theory) at the age of 14. He moved with his family to Sevastopol. In 1919-1920, he was the secretary of Bishop Veniamin (Ivan Afanssievich Fedchenkov, 12 Sep 1880-4 Oct 1961) of Sevastopol, Vicar of the Tavrichesky Diocese, and soon after Bishop of the Army and Navy of Russia.

In 1920, Ivan Alexeyevich emigrated to Serbia, and entered the Theological Faculty of Belgrade University, which he finished in 1928. While in Belgrade, Ivan Alexeyevich studied informally under Archbishop Gabriel (Grigorii Markellovich Chepur, 19/31 Dec 1874-1/14 March 1933) of Cheliabinsk. Vladika Gabriel unselfishly gave his tiume to a group of young people, theology students and “church musicians, including the future Archbishop Antony” (Alexander Sinkevich, 1903-25 Jul/7 Aug 1996) of Los Angeles and Southern California, “Ivban Alexeyevich von Gardner, the future priest Vasilii Tarasev (his son and grandson are presently priests in Belgrade), a Mr. Maslich, and Valeria Konstantinovana Gubanova, by marriage Hoecke, ansd some other lovers of Russian Orthodox choral singing. That group formed trhe “left cliros” of Belgrade’s Russian Orthodox Church under the inspiration of Bishop Gabriel. In Gardner’s words, he handed down to them the best, noblest traditions of Stolp and Znamenny singing and composed for them arrangements Lenten, Paschal, and other services of exquisite expressiveness and simplicity at the same time.” [1]”Archbishop Garbiel Chepur, 1874-1933″ Professor Maria Ledkovsky Orthodox Life Sep-Oct 2002 pages 7-8 He also continued his studies of Liturgical Music in Yugoslavia, working with authorities on Church Music who had also left Russia in the wake of the bolshevik revolution. He went on to teach Greek, Liturgics, and Church Music and Singing at Seminaries in Belgrade and Cetinje, Montenegro. In 1931, he travelled to Carpathian Rus, where he studied the local church music, collecting scores and studying the local singing traditions. In 1936, he entered the Monastery of Saint Job of Pochaev in Ladomirova, Czechoslovakia. The Abbot of the Monastery at the time was Archimandrite Seraphim (Leonid Georgievich Ivanov, 1 Aug 1897-12/25 July 1987) who later became the Archbishop of Chicago & Detroit, and Deputy President of the Synod of Bishops of the Church Abroad under Metropolitan Philaret (Georgi Nikolaevich Voznesensky, 22 Mar 1903-8/21 Nov 1985). Ivan Alexeyevich was tonsured a monk in 1936, with the name Philip. He worked on the publications of the Monastery, “Orthodox Carpathian Russia,” “Orthodox Russia,” and “Childhood in Christ.” He served as parish priest in the city of Hust, Czechoslovakia. He was elevated to Igumen, and from 1934 to 1938, he served in the Russian Ecclesiastical Mission in Jerusalem. He served in Vienna and the Saint Nicholas Cathedral from 1938 to 1942 under Bishop Vasily (V.M. Pavlovsky, 21 Nov 1880-1945) of Vienna, Vicar of the Metropolitan District of Berlin and Central Europe. In 1942, Igumen Philip was elevated to Archimandrite, and transferred to Berlin as the Rector of the Cathedral.

Bishop Philip was Bishop of Potsdam until 1945, when he decided to resign his Episcopate. He did so to dedicate his life to the academic study of Russian Liturgical Music, and to get married. There is a somewhat persistent rumor that when he resigned, Bishop Philip took part in a “de-consecration” service, in which he entered the church in his episcopal vestments, which were then stripped from him. Sources say this did happen, it didn’t happen, and some refuse to answer questions about it.

At some point during World War II, during an Allied bombing run on Berlin, his collection of Liturgical Music manuscripts were destroyed; a collection he had spent most of his life collecting. A part of this collection was the collected musical works of Archbishop Gabriel of Cheliabinsk; “Gardner sems to have possessed all of them, yet they went up in flames with the rest of Gardner’s collections of music and compositions when Berlin was bombardedduring World War II.” [2]ibid. page 8

In 1945 he was married. In 1945, for a short time he was Regent of the Russian Church in Salzburg, Austria. From 1952 to 1954, he worked with the Saint John Damascene Choir under Karl Linke, in Essen, Germany. From 1954 to 1965, he taught Russian Liturgical Music at the University of Munich, and in 1965 was awarded a Doctorate of Philosophy at that University, for his dissertation, “Das problem altrussischen demenstrischen Kirhendesanges und seiner linienlosen Notation.”

In 1967, he was made a member of the International Commission for the Study of Old Slavonic Music Sites of the Bavarian Academy of Sciences. He was one of the major experts on Russian Liturgical Music outside of Russia. He was also a composer and author of spiritual and musical compositions, and published several music books and transcriptions. He also authored numerous articles and research papers on church singing, which were published in (among other publications) “New Time” (the Russian newspaper in Belgrade); “Sunday Readings” (Journal of the Polish Orthodox Metropolia); “Orthodox Russia” (published at Holy Trinity Monastery); and “The Russian People’s Voice” (published in Uzhorod). A bibliography of Johann von Gardner’s work was prepared by Professor Dennis Breali of Ottawa University which included 80 titles. Johann von Gardner, the former Bishop Philip of Potsdam, reposed in the Lord on 26 February 1984.