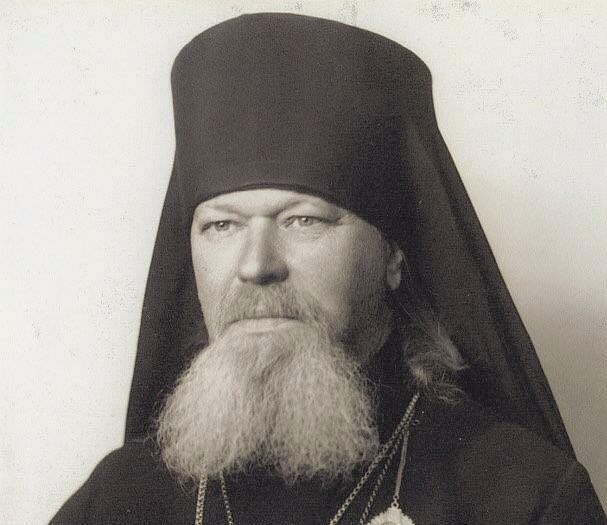 Bishop Vassily (V. M.Pavlovsky, 1880-1945) of Vienna is perhaps one of the least well known of all of the many Hierarchs who have served the Russian Orthodox Church Outside of Russia. Little is known of his youth and origins.

Bishop Vassily (V. M. Pavlovsky, 1880-1945) of Vienna is perhaps one of the least well known of all of the many Hierarchs who have served the Russian Orthodox Church Outside of Russia. Little is known of his youth and origins. It is known that he was born in Kazan in 1880, and attended the Imperial Kazan Theological Academy. He completed the course of studies, earning a Master’s Degree in Theology.

Like so many of his countrymen, circumstances surrounding the bolshevik takeover of Russia forced Vladika Vassily to leave his homeland. During those turbulent years, he emigrated to Manchuria. By the 1920’s, he served as Director of the Russian High School in Mukden, Manchuria.

In the late 1920’s, Theological Courses were organized in were organized in Harbin, Manchuria; these courses were incorporated into the Saint Vladimir Institute, which was founded in 1934. The Institute was comprised of four faculties: Theology, Arts & Sciences, Architecture and Electrical Engineering [Metropolitan Philaret (Georgy Nikolaevich Voznesensky, 22 Mar 1903-8/21 Nov 1985) of Blessed Memory graduated from the Electrical Engineering Faculty of the Saint Vladimir Institute]. Bishop Dimitry (Nikolai Fedorovich Voznesensky, 1871-31 Jan 1947) of Hailar (Metropolitan Philaret’s father) was appointed as Rector of the Institute; his deputy, as Dean, was Hieromonk Vassily (Pavlovsky). In addition to his duties as Dean, Professor Hieromonk Vassily taught Greek, Old Testament, Patrology, Pastoral Theology, and Pedagogy at the Institute.

The Theological Faculty of the Saint Vladimir Institute was located in large building complex, which included the Institute’s own church. The faculty of the Institute stressed its direct succession from the Theological Academies of Russia, and consisted of a Bishop, three professors (one of which was Hieromonk Vassily), seven assistant professors, three lecturers, and several clergymen of various ranks. The program of studies consisted of a four year course. In the period prior to World War II, the Institute was the largest educational establishment of the Church Abroad for the education of its future clergy, but due to great distances to travel to Manchuria from other centers of the Church Abroad, the students were primarily limited to those from the Far East.

Hieromonk Vassily was elevated to Archimandrite in 1935; in that same year, he was appointed as Abbot of the Monastery of the Kazan Icon of the Most Holy Mother of God in Harbin, which had been founded in 1924 by Archimandrite Yuvenaly (Ivan Kelsievich Kilin, 19 Apr 1875-28 Dec 1958; 16 Feb 1935, consecrated as Bishop of Tiantsin, Chinese Turkestan (Sinkiang); at the time of his death he was Archbishop of Izhevsk & Udmurtsk). Archimandrite Yuvenali’s consecration as Bishop of Tiantsin in 1935 took him away from his duties at the Monastery he founded, which led to Archimandrite Vassily’s appointment. The Kazan Icon Monastery served as a refuge for monks who had fled Russia, and went on to become the most important monastic center of the Church Abroad prior to World War II.

The construction of the Monastery complex took ten years. and “included a two story structure for the brotherhood, with a refectory, kitchen, cells, and the Abbot’s quarters; a small hospital dedicated to Dr. Kazem Bek, a building which included an out-patient clinic, dentist’s office, and pharmacy; a separate Monastery Printing House, and several more buildings housing various workshops and additional cells for the brotherhood. The Monastery ran a smithy, bookbindery, and tailor’s, carpenter’s, and icon painting workshops.” [1]Seide, Father Georg. Monasteries & Convents of the Russian Orthodox Church Abroad. Translated from the German by Theophilos Lasswell. Monastery of Saint Job of Pochaev. Munich, Germany 1990. p. … Continue reading

The Monastery served as a spiritual, educational, medical, and charitable center of the Church Abroad in Manchuria. “Many of the local youth were educated here. The brotherhood’s needs were provided from their own agricultural resources; economically, the Monastery was self-sufficient and well off. Four churches and chapels were located on the grounds, and about ten thousand pilgrims attended the Monastery services on great feast days. The solemn monastic services attracted many, as did the desire to venerate the relics of Saint Panteleimon, sent to the Monastery from Mount Athos in 1929, and the presence of two miraculously renewed icons of the Most Holy Mother of God, ‘Vladimir,’ and ‘The Unburnt Bush.’ Two other icons of the Mother of God, ‘Seeker of the Lost,’ and ‘Of Three Hands’ were also venerated at the Monastery as miracle working.” [2]ibid. p. 62-63.

The Monastery’s printing and publishing facilities were of major importance-“Next to those of the Brotherhood of Saint Job of Pochaev in Ladomirova, Czechoslovakia, the most important of the Church Abroad. The major journal for both the Chinese and Manchurian Dioceses, Khleb Nebesni (Heavenly Bread), was printed in press runs of 7,500 copies per issue, and was distinguished by a high academic and theological standard. Calendars and Prayer Books were published, in some cases, in editions of 100,000 copies. Ten thousand copies of the Akathist to the Mother of God were published, and 2,500 copies of an edition of Lives of the Saints appeared annually, starting in 1930. While diversity characterized the work of the Brotherhood in Ladomirova, the vast circulation of its periodicals and the large editions distinguished the labors of the monks of the Kazan Icon Monastery.” [3]ibid. p. 63.

The Monastery was also well known for its charitable endeavours: “Between the years 1931 and 1939, a total of 2,763 patients were treated in the Bek Hospital, and 61,802 were examined; treatment was provided without charge. The Monastery’s Pharmacy dispensed 30,737 prescriptions free of charge, or for a very small fee. Another 43,775 patients were examined in the out-patient clinic, 16,072 of them free of charge. All this work was accomplished by the four doctors employed by the Monastery.” [4]ibid. p. 64.

The Monastery’s successful printing establishment and agricultural self-sufficiency allowed the large scale charitable efforts. By 1939, the Monastery counted 45 monks and 40 novices in its brotherhood. Archimandrite Vassily directed the Kazan Icon Monastery from 1935 to 1938.

In that same year, half a world away, the Second All Diaspora Sobor of the Church Abroad met in Yugoslavia. Among the decisions of the Sobor, one created an Austrian Vicariate for the Diocese of Berlin & Germany, then ruled by Archbishop Seraphim (Karl Albert Georg Lade, 1883-14 Sep 1950) of Berlin & Germany. It was also decided that Archimandrite Vassily would be consecrated for the post. In 1938, he was consecrated to the Episcopate as Bishop of Vienna, In 1942, the German Diocese was elevated to the status of a Metropolitan District-of Berlin and Central Europe, and Archbishop Seraphim was elevated to Metropolitan.

In 1943, Vladika Vassily hosted the Sobor of Bishops, meeting in Vienna at the Saint Nicholas Cathedral. The principal business of the Sobor was to expose the fraud of the “election” of Metropolitan Sergius (Ivan Nikolaevich Stragorodsky, 11 Jan 1867-2/15 May 1944; Patriarch of Moscow and All Rus, 1943) of Moscow as “Patriarch of Moscow and All Rus,” engineered by Stalin as a means to aid the war effort against Germany. Also during the Sobor, Archimandrite Grigorii (Georgy Ivanovich Borishkevich, 18 Apr 1889-13/26 Oct 1957; later Archbishop of Chicago & Detroit) was consecrated to the Episcopate as Bishop of Grodno for the Autonomous Byelorussian Orthodox Church, which was an important act of cooperation between the Church Abroad and the Byelorussian Church, newly freed from the bolshevik yoke.

In 1944, Vladika Vassily attended a Synod meeting in Belgrade, where he signed a Protocol as a member and secretary of the Synod of the Church Abroad. After the defeat of Germany, Austria was separated from the German Diocese, and Vladika Vassily was named Bishop of Vienna and Austria. He reposed in the Lord a few months later in the fall of 1945 in Munich, Germany.

Vladika Vassily is not counted among the well known Hierarchs of the Church Abroad, largely due to the troubled times in which he served the Holy Church. Due to the tragedies of the War, his services were not well known, nor well publicised. Photographing Church services and Bishops took second place to important war news. But, his service as a faithful shepherd of the Church Abroad during dangerous and troubled times is honored by all the children of Christ’s Holy Church. May His Memory be Eternal!