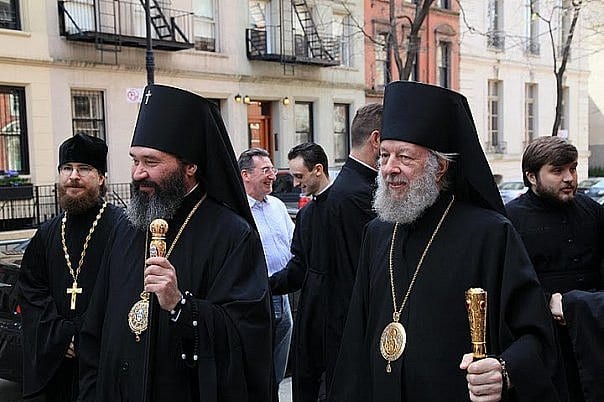 A vicar bishop of ROCOR’s biggest diocese offers his perspective on various problems faced by the Russian Church Abroad.

Last November we posted an interview with Bishop Jerome of Manhattan on the subject of Archbishop Nikon. At the end of that interview we mentioned that the next time we would talk about the current problems of the Russian Church Abroad. Now, Vladyka Jerome has kindly agreed to answer our questions, and we are delighted to offer you this interview focusing on the issue of conciliarity within the Russian Church Abroad.

Apostolic Canon 34 says that the bishops of every nation ought to acknowledge their first hierarch and do nothing without his consent, but neither he should do anything without the consent of all bishops. The principle of conciliarity expressed here is a warrant for healthy interaction among members of: the local church, diocese, parish, and family. What can be done to implement this golden rule in the life of our Russian Church Abroad?

At present, I would say that we have a rather good interaction between the first hierarch and the other bishops. Such problems as now exist, lie in the practical difficulty of holding regular Synod meetings; but this has been compensated for, in part, by means of telephone conferences. An area that needs more attention, though, is the interaction of the hierarchy with the parish clergy and parishioners. The widespread disinformation that led to schisms in some places, above all South America, was possible because “public relations” were such a weak area for us. During the long years of Soviet rule in Russia, this was not a serious problem; today, it is.

The flock and clergy of the Russian Church Abroad often have such divergent views regarding theological and historical issues that we seem to be in dire need of a new All-Diaspora Council. Do you think that it is necessary to establish a body similar to the Inter-Council Presence Moscow in order to encourage conciliarity within the Russian Church Abroad?

I am not sure what “theological divergences” there might be, except to the extent that lay people may not have received instruction in the teachings of the Orthodox Church. However, there are certainly ecclesiological differences, and misinformation about Church history is extensive. Be that as it may, my personal experience at the Nyack pastoral conference in December, 2003, and the All-Diaspora Council held in San Francisco in 2006, lead me to think that such meetings would not solve the problem — if only because persons with divergent views, were not listening to one another. For example, one of the delegates in San Francisco in 2006, had prepared a speech he intended to deliver, even though he was not a scheduled speaker. Therefore, he simply used the question and answer periods to try and read his speech, which had little or nothing to do with the talks it followed, in 3-minute segments allotted for “questions to the speaker.” There was a group of a dozen or so people, with a set agenda, who were invariably in line for the microphone, endlessly saying the same things over and over, and making it difficult for others to get a chance to ask questions or make comments. This is what is known as “a dialogue of the deaf”. Clearly, some other way of communicating is needed.

The Apostle Paul lamented isolationism among Christians already in the first century AD: “Each one of you is saying, ‘I am of Paul,’ and ‘I of Apollos,’ and ‘I of Cephas,’ ‘I of Christ’ ” (1 Co.1:12). What can be done to fight isolationist trends within the ROCOR and to bolster collaboration among the various church units?

The root of this problem is that some clergy deliberately try to develop a personal following, a “personality cult”. The very fact they do this, shows a schismatic tendency: it was, for example, the cause of the “Boston schism” of 1986. Many of these clergy would be quite unable to develop a circle of adherents, were they not entrusted with the care of a flock or a monastic community. And most of these schismatically inclined “elders” came into the ranks of the clergy only because there was such a critical lack of priests.

Many people consider Normal Parish By-Laws (NPBL) to be the product of a liberal perspective. What do you think of NPBL as it applies to the Russian Church Abroad?

My years as a parish priest led me to feel that the Normal Parish By-Laws need to be revised, in view of the changed situations we face today in the Russian Church Abroad. Those Bylaws were realistic enough in 1950, when most parishes consisted of recent emigres from Yugoslavia, China, the Baltic States, or who had fled the USSR during World War II. They had a different mindset from most of today’s churchgoers, and parish life has changed greatly in the past 60 years.

As far as I understand the core of our Normal Parish By-Laws derives from the All-Russian Council of 1917-18. Therefore, our NPBL is a valuable link connecting us with the council that has become a symbol of conciliarity. Yet clearly there are some who feel the NPBL ought to be up-dated. Do you agree? If so, what specific revisions would you propose?

In fact, the current bylaws are not the same as those drawn up by the All-Russian Council of 1917-1918. The actual bylaws put forth by that Council can still be seen in one parish in California, but the rules in force in most of our parishes, actually date only from the early 1950’s with a few more recent refinements. The 1918 bylaws gave more authority to the parish priest, than the current ones do. Revisions would, of course, have to be carefully considered. My experience as a parish priest was that, for example, under the existing rules, there is no limit to the number of members of one and the same family who can be on the parish council. This may have been less of an issue 50 years ago, when most of the parishioners were from the “second emigration,” and tended to be more or less active in the church. Today, it is often the case that the majority are new arrivals who tend to be passive, attend church but do not want to sign up as members, for various reasons. There can be a large community, but the parish council may be in the hands of a small group, perhaps not really representative of the whole congregation. On the other hand, we have had many cases where the priest took a very domineering role, which can also lead to unhealthy results. The whole situation today is much more complicated than the picture one gets from reading the parish by-laws.

Vladyka, you mentioned that most immigrants from Russia are not interested in formally joining a parish congregation. They may attend a parish church for years, but for some reason do not want to make their membership official. What can be done to get these people to commit themselves?

There seem to be two main reasons for this hesitation:

In an interview posted on the Web site of the Easter American Diocese, you mentioned that the ROCOR was in perfect order in the 1950s and 1960s. Could you expand upon that comment?

What I meant was this, that in the 1950’s and 1960’s, the situation in our Church was much simpler due to external and internal factors. The internal factors were the excellent, old-school clergy we had in those days, many of whom had studied in Russian theological schools before the revolution, or who had been close to Metropolitan Anthony Khrapovitsky (an example is Archbishop Nikon (Rklitsky) of Washington DC and Florida, who had studied in a seminary before the revolution and then been part of Metropolitan Anthony’s innermost circle in Belgrade). Many parishioners had known one another in displaced persons’ camps in Europe, and parishes were quickly formed in various cities, by active and committed members. The external factor was, of course, the Soviet regime, which gave the ROCOR a clear role of “spiritual opposition,” and of witness against persecution. There was a general sense that the Church in Russia was not free, therefore the ROCOR could see itself as “the only free voice of the Russian Church.” Since that time, on the one hand the “old school clergy” mostly died off, their replacements lacked many of the advantages their predecessors had, and the changes in Russia after the fall of communism made for a drastically different external situation. The challenge faced by the ROCOR has been to respond to those changes.

How can we improve the ecclesiastical education of both our clergy and parishioners so that they are more likely to contribute in a conciliar way to our bishops in their guidance of the Russian Church Abroad?

There is no simple answer here. For people to be educated, they themselves must desire and seek information. Most parish priests can testify that preaching to the flock against sects or false teachings, has little lasting effect, and people may be politely quiet but pay no attention. But once someone has fallen into the clutches of a sect, it is difficult to reach them or persuade them of their error. Much the same can be said of the schisms that have claimed some of our members: the difference being, that the teachers of schism come from within the Church rather than from without, and when clergy lead their flock into schism, they abuse the trust that was placed in them by the hierarchy.

In some parishes, it is possible to hold talks or discussions with church members, and in those cases where doubt or confusion has already entered their minds, hearing clear and solidly Orthodox explanations from their clergy can be of great value.

Thank you, your Grace, for sharing your insights with us. We look forward to continuing our conversation.