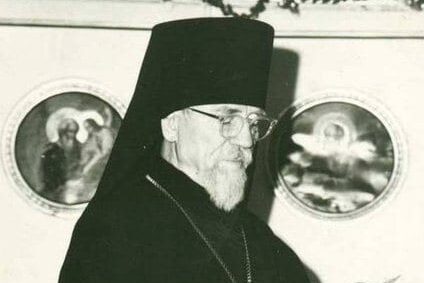 Archbishop Amvrossy (Merezhko, 25 Aug1889-26 Nov/9 Dec 1974) Archbishop Amvrossy (Adrian Merezhko) was born near Kiev in 1889. He grew up in the Kiev Caves Lavra. After graduation from secondary school, he worked as a secretary in the Ekaterinoslav provincial administration. He emigrated to the USA in 1923.

Archbishop Amvrossy (Adrian Merezhko, 25 Aug 1889-26 Nov/9 Dec 1974) was born near Kiev in 1889. He grew up in the Kiev Caves Lavra. After graduation from secondary school, he worked as a secretary in the Ekaterinoslav provincial administration. He emigrated to the USA in 1923. In the USA, he became acquainted with Archbishop Vitaly (Vassily Ivanovich Maximenko, 8/20 Aug 1873-8/21 Mar 1960) who influenced him greatly as a mentor, and imparted a theological education to him. He was ordained to the diaconate by Vladika Vitaly in 1938, and served at Vladika Vitaly’s Cathedral of the Ascension in the Bronx (New York). He was ordained to the priesthood, also in 1938, by Metropolitan Theophilus (Feodor Nikolaevich Pashkovsky, 6 Feb 1874-14/27 Jun 1950), who at that time headed the North American Metropolitan District of the Russian Church Abroad. In 1939, Father Adrian was assigned as rector of the parish of Saint Spiridon in Perth Amboy, New Jersey.

In 1946, he followed Metropolitan Theophilus into schism from the Russian Church Abroad. This schism was the result of the Metropolia’s infamous 1946 “Cleveland Council,” which has been described as an “uncanonical domination by laity over the clergy and bishops.” (1) The 1946 “Cleveland Council” resulted in the North American Metropolia’s embarking on an “independent” course; from 1946 until the North American Metropolia received Autocephaly from the Moscow Patriarchate in 1970, the Metropolia was “on its own,” recognizing no superiors, and its “independent” status not being recognized by any of the other Orthodox Churches. In 1955, Father Adrian was consecrated to the Episcopate of the North American Metropolia as Bishop of Sitka and Alaska. While serving as Bishop of Alaska, he was sent for seven months to Tokyo to oversee the Orthodox Church of Japan. In 1967, he was appointed as Archbishop of Pittsburgh and West Virginia, which was, at that time, the largest Diocese of the Metropolia.

Archbishop Amvrossy was deeply disillusioned by the results of the Autocephaly granted to the North American Metropolia by the Moscow Patriarchate in 1970. He was also disturbed by trends he recognized in the life of the newly created Orthodox Church in America:

“Orthodox Christian life is based upon man’s ability to cope with his passivity and the influences of a world of evil and temptation. Modernism, to the contrary, is based upon a lowering of spiritual standards in the name of accommodation to this world. Of late, in the Metropolia, there has been a particularly intensive attack upon the use of the Church Slavonic language during services; the shortening and diminution of these services; the introduction of the Gregorian calendar into church life; the granting of mass confessions; and the giving of communion without confession. When I spoke of these things at the last Council of Bishops meeting that I attended [that is, in the OCA], my observations brought forth such a violent reaction that it became clear that I could no longer endure and be responsible new direction in church life. For these reasons, I was compelled to beseech His Eminence Metropolitan Philaret [Georgy Nikolaevich Voznesensky, 22 Mar 1903-8/21 Nov 1985] that he accept me as a member of the hierarchy of the Russian Orthodox Church Outside of Russia, the true witness of the legacy of the martyred Patriarch Tikhon.” (2) Archbishop Amvrossy was received into the Russian Church Abroad in 1972, and served at the Synodal Cathedral in New York City, as well as various other parishes in the USA. In 1973, Vladika Amvrossy went to live at the Holy Transfiguration Monastery in Boston, Massachusetts, which then was under the jurisiction of the Russian Church Abroad. Vladika Amvrossy reposed there in 1974, and was buried at the monastic cemetery at Holy Trinity Monastery in Jordanville, New York. May his memory be eternal!