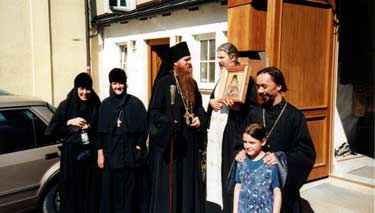 Moscow. October 14-16, 2010. Our editorial team joins Bishop Agapit and Archpriest Nikolai Artemoff in calling for historians to be allowed access to Russian archives. We also call on the Russian state to recognize unequivocally the crimes of the communist regime. You may join this appeal by expressing your support in the comments to this article on our Web site and by circulating it.

From the Editor: Our editorial team joins Bishop Agapit and Archpriest Nikolai Artemoff in calling for historians to be allowed access to Russian archives. We also call on the Russian state to recognize unequivocally the crimes of the communist regime. You may join this appeal by expressing your support in the comments to this article on our Web site and by circulating it.

Since we are not able personally to attend the conference, we would like to call the attention of the participants to a text which expresses not only our personal concerns, but also the feelings of many believers in the diaspora, both in our German diocese and throughout the world.

In contemporary Russia, many speak of the impermissibility of the falsification of history. Over the past two years, the phrase has come to be used so obssessively that many people find it alarming — and rightly so. The strange phrase “falsification of history” was once practically unkown to Russian academia, and moreover was coined by Stalinist propaganda. It was the screaming label of propaganda which, in the 1940’s, became a routine ideological fiction, a clear red stop-light for thought, redirecting one’s thoughts back to the rails of stereotypes. The studied use of this cliche was a testimony of the Soviet scholar’s official loyalty and dedication to the Bolshevik regime. “Falsification” referred to any specific view of historical events that did not correspond to the false dogmas of the Party.

Almost twenty years have passed since the Communist Party’s fall from power and the end of the Soviet Union. It was not only due to socio-economic problems that the theomachist state of Lenin and Stalin, founded on the destruction of a thousand-year-old Russia, finally crumbled. Its collapse was primarily due to its all-pervasive lies. The daily life of the Soviet man (if not in his private life, then certainly in his public life) was nourished by lies, beginning in school and continuing beyond it, lies which affected social discourse at its very root.

The effects of this state of affairs on the roots of Russian history, on Russian historical consciousness, were quite significant. Just after the revolution, the understanding of history remained clearly established but, by the end of the 1930’s, a new and twisted understanding arose, cut of from its spiritual foundations. Naturally, this lie came to dominate the history books. And now the great tragedy is that, twenty years into the post-soviet era, the most important thing has still not taken place in Russia: the spiritual assessment by society of the tragedy that befell their own country in the twentieth century, and the liberation of the Russian people from Bolshevik myths and fictions. It is necessary to take measures against the distortion of history. But this must be done upon the foundation of repentant reconsideration of the actual facts of our Russian history, casting off the Stalinist stereotypes.

But that’s precisely what isn’t happening. Actually, a special Cross-procession has taken place. An eight-meter Cross was brought from Solovki to Moscow on a boat, travelling on the canals built by the labor of prisoners. Who noticed this event? Who remembers it? True, there are historians in Russia today (such as L.A. Golovkova and others at the  St. Tikhon’s Orthodox Humanitarian University) who are working to preserve the memory of this journey, and of those (by name, even!) who perished in the construction of these canals. But has their labor of monument-building penetrated into the mind of society? Their work can truly be called a podvig, in that our contemporary society passes over the results of their labors in lightminded silence. They are simply without a memory. “The Gulag Archipelago” is practically never noticed. They pass it by.

But on the field at Butovo, below Moscow, they’ve erected a wonderful church, and we participated in its triumphany consecration. Every day tens of thousands of Orthodox Christians go there to honor the memory of the slain. Notwithstanding, this is the only place in Russia, in the former Soviet Union, where one can really sense what the Stalinist regime actually way. Insensibility grows in a man when he lives on a street that is named after an open murderer and hater of Russia. What is signified by the debate over the return of the “silver Felix” to the place where a stone from Solovki now stands as a monument? Compare this to Germany, which has struggled much and continues to struggle to understand her historical path.

In Germany there is even an Orthodox temple in Dachau, albeit a small one. And three kilometers away there is another, where the “ostarbeiters” (the so-called “eastern laborers” who were led there by force) bore their Cross next to Dachau. These were rejected both by their own and by the foreigners. Where could they have turned? To their homeland? As “traitors”? Back to the camps … out of Hitler’s camps into Stalin’s? But in far-way Germany, there are temples and a natural memory, and they have greatly progressed on the path of historical labor.

Don’t we Russians need this kind of historical labor, or are we not suited for it? O, that what is now partly understood in Butovo could be understood in all of Russia! Is it conceivable? Are we capable of a similar co-suffering, in conformity with the Cross of Christ? Or is that spiritual renewal too great for us, that might be born from the pain of a true understanding of the Russian Cross?

One clear witness of the opposition that exists to spiritual reconsideration and renewal is the fact that the archives remain closed. There it is: a hindrance to our ability to breath — fear in the face of a source of fresh air. But without a new word on her own history, Russia will suffocate. And this is how we will suffocate: in inertia, which produces credulity toward the myths and fabrications of Communist times. All of this betrays the most terrible sickness, witnessess to an internal paralysis.

This paralysis imposes itself. It holds back any fresh, illuminating love and compassionate thought. It creates an atmosphere that is unbearable for science.

In the past few years, in all places — little by little, but in part even openly in the mass media and in academic literature – a rehabilitation of Stalinism has been taking place. We are asked to reconsider the crimes of the 1930’s and 40’s, excluding the physical extermination of the clergy of the world’s largest Orthodox Church and millions of our compatriots, as if these were “historical necessities,” some sort of objective conditions, brought about by the mobilization of the people on the eve of the second world war, while Stalin himself and his cohorts played an entirely active role in the undoing of these crimes — just like Hitler.

It is indicative of the state of affairs that the textbook of national history for the years 1917-2009, by professors A.S. Barsenkov and A. I. Vdovin of Moscow State University, is already in its third printing, having been officially established as a university course. The attempts to bestow glory and respectability on the antichristian Stalinist regime are distorting the facts of history, not to mention the interpretation of history. For example, when A.S. Bersenkov and A.I. Vdovin declare that the bloody Stalinist collectivization — which, according to A. I. Solzhenitsyn, was “the breaking of the spine of the Russian peasantry” — was essentially the “perfection of Stolypin’s agragrian reforms,” it demonstrates a serious lack of professionalism on the part of these professors. Here we have neither a thorough understanding of Stolypin’s reforms, nor of Stalinist collectivization. A whole series of other mistakes have already been discussed in the press and on the internet. But all of this discussion does not change the situation.

The ideological campaign against the “falsifiers of history,” which began at the end of the 1940’s, succeeded in bring cynics and dilletants to the fore of Russian historiography. Their influence upon the social conscience has been very great up until now. But any attempt to present Stalin to the Russian youth as a dedicated civil worker and patriot not only dishonors the memory of the millions of victims of the theomachic Communist regime, but also tramples upon the spiritual struggle of the New Martyrs and Confessors of Russia, and, what is more, it shows a willingness to trample upon the Divine Image present in each unique human personality.

It was precisely for the suppression and enslavement of the principle of personhood, so clearly manifested in the Russian saints, that the Bolsheviks strove most of all. The understanding that “God is not in strength, but in truth,” is what inwardly defines Russia.

The submission of oneself to truth was, at one time, obscured inRussia, and then further distorted by the godless authority, which was alien to the fundamental values of the Russian people. On the foundation of their cherished confession, the Russian Church Abroad was preserved and spread throughout the world for all future generations. Therefore the further development of Russian historiography is not a matter of indifference to us. It is very closely linked with the raising of future generations, who are called to receive and reveal the higher values and ideals of Russia. The blood of those who were executed on the field of Butovo, which blood was poured out over all of Russia, cries out to heaven. Will we,today’s generation, hear its voice? Might we not find the strength to respond and come to know love for our relatives, to redeem their sufferings, if only in part, which are worthy of veneration, as was done with the temple in Butovo?

Such an approach to Russian history is life-giving and salvific for Russia herself. And this is important. But such a sincere approach will also doubtless improve the image of Russia among other nations. There, as is well known, the negative and distorted image of our country is confirmed by our sluggishness towards assessing the crimes of the Communist regime. This calls forth discord and helps those powers who are inimical toward Russia to strengthen their long-held prejudices against her. For all of these reasons, it is time to conclude with a decisive push toward the truth, with spiritual striving, which is peculiarity of the deep character of the Russian soul.

Historical practice must receive a strong factual basis through the opening of the archives. The work must be carried out not amid repressive and propagandistic shouts, but in an atmosphere of full methodological liberty. Through living, open, and fearless dialogue, Russian historiography is called and is able to make, at last, a true and peace-making statement, through a balanced assessment of the tragedy that afflicted so many nations in the twentieth century. May God guide us to such an expression.