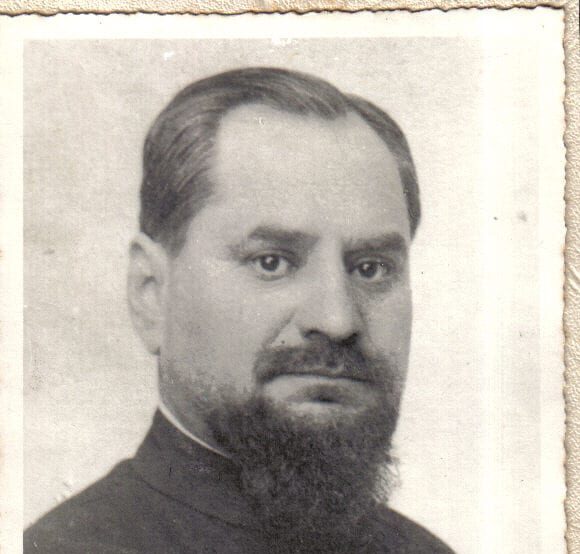 I am posting below a story about two ROCOR priests: Archpriest Gregory, who served in Serbia before and during WWII, and Archpriest Paul, who has been serving in Venezuela.

I am posting below a story about two ROCOR priests: Archpriest Gregory, who served in Serbia before and during WWII, and Archpriest Paul, who has been serving in Venezuela.

My instructor at Holy Trinity Seminary has given me the task to write everything that I know about my great-grandfather.  It is to be in the form of a composition. Such a task is very interesting to me since it forces me to go deep into the life of my ancestors. But what can I tell regarding my ancestor whom I, except as in a photo, never saw!

I have spoken with father, and the main thing he says is to go to my grandfather.  My grandfather has the most valid things to say regarding the life of his parents.  He after all is the only one who knows my great-grandfather on a first-hand basis.  And so naturally, I went to my grandfather and this is what was given to me (according to his memories):

“Your Great-grandfather, Grigory Vasilevich Volkov, I believe was born in Kiev 1891 (as well as his wife Olga Pavlovna Snedkova), however, since his early childhood he lived in Moscow. My father studied in a conservatory.  He studied under director Ippolitov-Ivanove.  Shortly thereafter, my father became a symphony as well as an orchestra conductor.  I remember him conducting in the Caucasus, in resort places like Kislovodsk”…and so began his story, however, in order to make this brief, I will highlight the rest of the story.

I also have been told by my grandfather that his father (my great-grandfather) flied on the “bookshelf plane.”   I was always told how he went to the Finnish border so that he could join his wife and their three children (who already lived in Helzinki) (Гельсинфорсе). When the revolution began to recede in the south, it was possible to support a family and it was easier to reach Novorossisk from which, by a steamship, my great-grandfather and his family got out through to Turkey and unto Yugoslavia  (it was called differently was called).

It was in Yugoslavia, in Yugoslavia (on a small island on the Adriatic Sea, in fact) where my grandfather, Pavel, was born.  He was born 27-8-1922г (however, there was to be another daughter, the last and sixth child).  This was a significant island for my grandfather.  Anyway,my great-grandfather had to go to Belgrade to work.   He worked near a monastery (Раковица) where there was a stone quarry.   It was at this quarry where he carried stones on a wheelbarrow in order to support a family.  It was here, at this nearby monastery, where my grandfather christened.  However, after this job, my great-grandfather and his family went to Macedonia.  Here my great-grandfather taught music in different grammar schools and in the meantime prepared for the priesthood.  In Macedonia on January 1926 my great-aunt (his last sixth child) was still-born.  This was devastating as you can imagine. The great-grandfather рукопологал 2-8-1926г.

But continuing on, it was on the day of  the Prophet Eliahs that, Metropolitan Anthony-Krapovitsky -(of Pervoierarhov РЗЦ), met my great-grandfather and soon after ordained him priest.  My great-grandfather thereafter began to serve the Serbian refugees.  He served in many villages and in many churches and monasteries and other places of refuge.  These things were well remembered by my grandfather.

My great-grandfather, Father Gregory was always vigorous and active before his tragic disappearance February 16th 1943(?) which happened at the time of the German occupation.  It was the day after Sretenija Gospodnja (the day after his last liturgy).

When my grandfather told about these events, he always became strongly upset.  My grandfather remembers his father since his earliest childhood. He remembers their first arrival in Macedonia in the village of Bashinom, which belonged to the diocese of Bishop Varnava (the future patriarch).  Here at молдому (the island), was  to be situated the home of Father Gregory and his children.  It was here where upon arrival,  Father Gregory  had to quickly go and repair a church which was ready to fall under weight of a roof which was covered with the big stone plates.

Time and again I have heard how the virtues of my great-grandfather, such as his non-drinking and non-smoking ways, transferred over the generations. Indeed, his legacy continues today as nobody in my family smoke or drink  (not only three sons and three daughters, but even sons-in-law and daughters-in-law.  I also think, that we great-grandsons will be never attached to these vices neither).

Anyway, after the disappearance of the great-grandfather, his wife Olga Pavlovna Snedkova  along with his son Pavel (my grandfather), went many times from Belgrade (where then all children studied), into the  villages in order to search for my great-grandfather (even for a trace of him).  There was hope for a time when it was made known that during the time of occupation there were political groups who were in hiding and moving from place to place.

These are some of the details that my grandfather, who is now 86 years, told me.  This was what he remembered as a boy of 10 – 12 years-old.  He also remembers how when older, he would go to the Russian church in Belgrade. Often while in the services which were served by Metropolitan Anthony (Hrapovitsky), my grandfather remembers that my great-grandfather’s name was commemorated and remembered.

Later, when Archbishop Anastasy was made into a Metropolitan, my grandfather also remembers entering the church and seeing an unknown picture: in it showed metropolitan Anastasy serving, and Metropolitan Anthony sitting on the left choir with his elbows leaning on a fence.  In the middle the photo were many bishops (прибл sat. 8-10), but, in the center of the photo was Patriarch Varnava.  On the Patriarchs’s left-hand side (котораго) sat the Nikolai (Velimirovich).

My grandfather liked to speak about them: the beautifully expressive, big black eyes of the person of the Patriarch as well as the gloomy, slightly dark and strict face of Nikolai.  My grandfather does not remember all the surrounding conditions during that moment, but assumes that the photo was taken on the day of Holy Trinity, when the Patriarch visited our Holy Trinity Church.

My grandfather loved to tell us what constantly happened on services of Metropolitan Anastasy.  He remembers how the Metropolitan even was at my grandfather’s final examination for grammar school (in 1942).  He remembers how he received a Gospel from a priest with an inscription.  The memory of this celibate priest (Averkija Таушева) has remained; together with that of Father Justina Popovich,, which was impossible to confuse as wore a Russian cassock.

Anyway, when my grandfather went to the city while in a grammar school with « Мокрог Луг » , he walked 7 km there and 7 back.  He says that he often saw the island of Justina (“King Alexander”).  He remembers passing a street (where there was a church shop-zadruga)  where, on the other direction stood the  temple of St. Mark.

My grandfather says that much later he once again saw the celibate priest Father Averkija,  who was now in Archiepiscopal dignity.  He saw him at the Holy Trinity Monastery.  Among other memories (as this one) there were two which also represent a significant event for my grandfather.  However, two of them were close to him. The first one was on his first class at grammar school in the autumn  of 1934.  This was when the news spread that king Alexander was killed in Marseilles (as soon as he had set foot on land France)  and the second, at the death of Patriarch Varnava when it was told that he had been poisoned.

He remembers how the murder of the King rallied all: both friends and foes, both the West and the East.  The King was mourned by all Russians in Yugoslavia as well as all of the fellow countryman (except for some  anti-state elements).  Indeed, history attests that all requiems for the King in his funeral were certainly most memorable.

However, when the World Wars occurred, all life changed both in Yugoslavia and Russia.  Hence, both my grandfather and great-grandfather had found it necessary to undertake any work such as working at construction, cooking of tar for greasing of wheels on cart, installing central heating in big buildings, the cooking of soda and moving rocks at a quarry.

My grandfather however eventually studied for dentistry when a faculty opened in Belgrade. In 1952 he arrived with his family in Venezuela. Here it was necessary to study again in unfamiliar Spanish language and to achieve the local diploma for dentistry; in other words, to get formal credentials.  After he received his credentials, he began a career in Caracas which was to last for forty years.

In 1980 he was ordained to the priesthood (at around 50 years of age).  He was ordained by archbishop Seraphim of Caracas. At that time, there were only seven persons of our clergy, but this number began to decrease quickly and eventually, my grandfather had to be the rector of  two temples in Caracas.

Thus it appears that my grandfather personally knew all Metropolitans of Russian Foreign Church.  He even had a conversation (in the temple) with the present Patriarch Moscow. I think that very few had such possibility…

In conclusion, it was adventurous to undertake this task.  It was difficult to retrieve this information, however little it may be.  Nevertheless it was worth it, for such information gives a real connection to history.