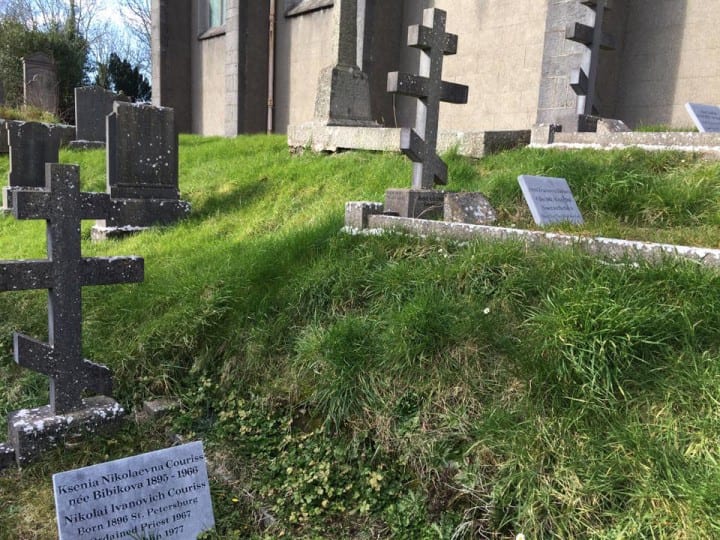 The grave of Fr. Nicolas and his Matushka Ksenia in the cemetery in Collon. Photo by Fr. Nikolay Evseev, who serves there memorial services

This article dedicated to the first Russian Orthodox priest in Ireland.

The following is an obituary of Fr. Nicholas Couriss (d. 1977), a priest of the ROCOR who cared for the scattered Orthodox communities of Ireland in the 1960s and 1970s. At that time, Ireland was one of the poorest countries in the European Economic Community. Interestingly, he pastoraly guided a community of the ROCOR in Northern Ireland at the height of the Troubles. He would be glad to see the current flowering of Orthodoxy on the Emerland island. We hope there is someone who takes care of his grave.

It is with great sadness that we report that the Reverend Father Nicholas Couriss died at 4 pm on Tuesday 3/16 August, 1977 at the age of 81.

Father Nicholas was born in St. Petersburg in 1896. He left Russia at the beginning of the Bolshevik Revolution in 1917. Before going to Ireland he lived in Greece for seven years. He first visited Dublin in 1931 and soon afterwards he and his wife settled at Collon, Co. Louth where they took up market gardening.

After the death of his wife in 1966, Father Nicholas traveled to New York where on Saturday 1/14 January, 1967 Metropolitan Philaret of the Russian Orthodox Church Outside of Russia ordained him to the priesthood. Father Nicholas then returned to Dublin where he spent the reminder of his life serving the parishioners, visiting the old and the sick in hospitals and homes throughout Dublin [ and Northern Ireland – ROCOR Studies (1)] He also ministered to visiting Greek Orthodox seamen. Although he remained a loyal priest of the Russian Orthodox Church Outside of Russia, Father Nicholas in recent years was listed as being the Greek priest in Dublin in the yearbook of the Greek Archdiocese of Thyateira and Great Britain. In recent years a number of Irish converts were instructed by Fr. Nicholas and received by him into the Holy Orthodox Church. (2)

Sadly, contact with the London clergy was minimal; he would have died without the sacraments of the Church, had it not been that by chance Archbishop John [Shakhovskoi-ROOCOR Studies] of San Francisco (Orthodox Church in America), and old friend of Father Nicholas, happened to break his journey to Copenhagen in order to visit Father Nicholas, not knowing that he was sick (3). Archbishop John visited Father Nicholas at a Dun Laoghire (Co. Dublin) nursing home and administrated to him spiritually. Father Nicholas passed away peacefully a few days later.

The funeral took place at Saint Bartholomew’s Church, Dublin on Monday 9/22 August 1977. The burial took place at Collon, Co. Louth, about 35 miles from Dublin, at the grave where his wife and only son are also buried. The funeral and burial were conducted by Father John Suscenko of the London Russian Cathedral.

A correspondent write, “…there was quite a large gathering at the funeral service in Dublin, and at Collon was a very large group – his old friends. Fr. Nicholas set up house in Collon, when he settled in Ireland first and lived there for a very long time. The Protestant Archbishop of Armagh and Primate of all Ireland, Dr. Simms, was at the funeral – Fr. Nicholas once taught him, Russian. Other friends there were nuns from the Medical Missions of Mary in Drogheda, who tended Mrs. Couris during her illness up to her death. Capuchin and Dominican monks were also present. I suppose one could safely say that practically the whole town of Collon was there (…) Remember Fr. Nicholas and his sister Liuba in your prayers”.

On Sunday 12/25 September, the 40th Day after the death of Father Nicholas, Divine Liturgy followed by Panikhida were served by Archimandrite Alexis (who will for the time being serve Dublin from London, visiting once a month) at the Mission to Seamen’s Church, Eden Quay, Dublin.

Father Nicholas, always a devoted friend of Old Calendarist, will be missed very much. Memory Eternal!

Notes
1. Archbishop Nikodem, head of the Russian Orthodox Church Outside Russia in the Britsh Isles, has given his blessing to the opening of yet another new church under his jurisdiction. The latest to be opened is situated at Prehen House, Co. Londonderry. It is dedicated to the Kazan Icon of the Mother of God. The first liturgy was served in the church, which is complete with iconostasis, by Fr. N. Couriss. The Kazan church was built through the generosity of one Irish Orthodox family. Details of services from either Ms. J. Peck, Prehen House, Co. Londonderry, or Fr. N. Couriss, 45 Pembroke Land, Dublin 4.

2. There are still some traces of them. According to the journal of the German Diocese, Der Bote der deutschen Diözese der Russischen Orthodoxen Kirche im Ausland (March-May, 2002), Archbishop Mark was accompanied by Ruaidhri MacEoghean, who was baptized by Fr. Nicholas, on his visit to a ROCOR parish in Stradbally Hall on May 26, 2002,

3. The Reverend Father Nikolai Couriss, who serves the Dublin parish of the Russian Orthodox Church Outside of Russia, is in hospital following a fall in which he sustained a broken hip. Fr. Nikolai is 82. The accident occurred on Palm Sunday morning while crossing the garden to get palms for the service; Fr. Nikolai fell and lay in the snow for quite some time until his 80 year-old sister found him. Please remember Fr. Nikolai in your prayers.