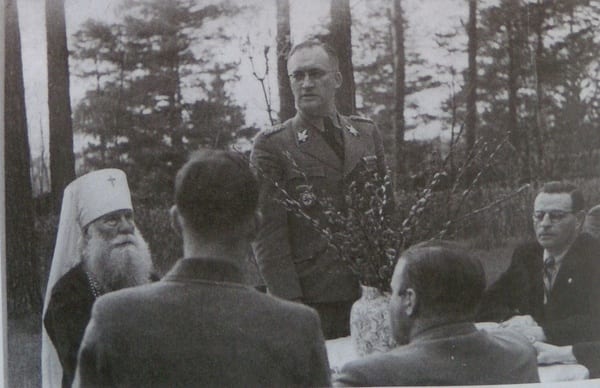 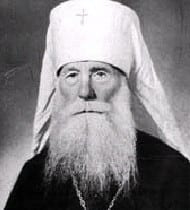 Metropolitan Panteleimon was born in Kostroma, an ancient Russian city, thought to have been founded in the 12th century. Kostroma was nearly destroyed twice in wars with Poland, and is also famous as the “birthplace” of the Romanov Dynasty, as the first Romanov Tsar, Mikhail Romanov, was offered the crown of Russia in 1612 in Kostroma. Kostroma is also home to the famed 10th century Wonderworking Fedorovskaia Icon of the Most Holy Mother of God. The most famous landmark in Kostroma is the Ipatiev Monastery, founded by a Tatar noble, an ancestor of Boris Godunov, in the 14th century. [1]http://ru.wikipedia.org/wiki/%D0%9F%D0%B0%D0%BD%D1%82%D0%B5%D0%BB%D0%B5%D0%B8%D0%BC%D0%BE%D0%BD_(%D0%A0%D0%BE%D0%B6%D0%BD%D0%BE%D0%B2%D1%81%D0%BA%D0%B8%D0%B9),[2]http://en.wikipedia.org/wiki/Kostroma

The future Metropolitan Panteleimon was born into a family of nobility; his father, Stefan Rozhnovskii, a Pole, was a “Master of the Horse” in the Court; his mother was Russian. “Master of the Horse” was a title in the Table of Ranks, an official list of positions and ranks of military, government, and court functionaries in the Russian Empire. This system governed rank and titles of the nobility not merely by birth, but by length and quality of service to the Empire. Promotion to the 14th rank brought personal nobility, to the 8th rank, hereditary nobility. As “Master of the Horse” was one of the higher ranks, the Rozhnovsky family had earned hereditary nobility. [3]http://en.wikipedia.org/wiki/Table_of_Ranks

Pavel Rozhnovskii graduated from the Novgorod Realschule, and was to pursue a military career, furthering his education in preparation for that by next attending the Nikolaevsk Military Engineering College in St. Petersburg. After graduating in 1895 with an officer’s rank, he was assigned to a battalion in Vilna. A pious youth, the young officer found, not distraction, but affliction witnessing the “amusements” preferred by his fellow officers-drinking, carousing, and the presence of “women of questionable character” at the Officer’s Club. Finding these aspects of military life repugnant and disturbing, Pavel Rozhnovsky resigned from the Army. He then served briefly as a Marshal of the Nobility in the Simbirsk Province, but soon also resigned from that position. Worldly life held no attractions for him, and he subsequently began studies in the Missionary courses at the Kazan Theological Academy. [4]http://drevo-info.ru/articles/16585.html

Not caring about position and wealth, inclined on higher pursuits, the young Pavel “rushed to missionary work … with zeal for Orthodoxy … he walked through villages, remote villages, carrying crosses, paper icons, Gospels, and spiritual literature.” [5]Ibid. On 9 Sep 1897, he received monastic tonsure with the name “Panteleimon,” after the Holy Great Martyr and Healer Panteleimon, in the Kazan Transfiguration Monastery. In the same Monastery, he was ordained hierodeacon 19 Sep 1897, and hieromonk on 27 Sep 1897. In July 1898, he was appointed rector of the Kazan Mironositskaya Hermitage in the Kazan Diocese, and was elevated to Igumen (Abbot; in current usage, “Abbot” can refer to the head of a monastery, but is also used as a title of monastic rank) there on 2 Feb 1900. On 26 Mar 1904, he was elevated to Archimandrite, and appointed as Abbot of the Zagoretsky Monastery in the Diocese of Volhynia. On 29 Sep 1905, he was appointed as Abbot of the Markov Holy Trinity Monastery, and Dean of Monasteries of the Vitebsk Diocese. In his seven years of service in Monasteries, those Monasteries that he had directed “flourished, in both the inner and outer states.” Also in 1905, for his zealous service, he was awarded the Order of Saint Anna, both the second and third classes. [6]op. cit. 4,[7]http://minds.by/monastery/gide/saints/panteleimon.html,[8]http://sr.isa.ru/~bin/nkws.exe/no_dbpath/ans/nmcalen/?HYZ9EJxGHoxITceUeuKhd81Uv5slTcGhe5srTd4jeC4iedG6XbuDc8rWdOiZe8mifG*cY8uafOuWsOeceG0Dc88Zem0FseLYc8qiceXb8LtmNKNyV8Kfc5tjAnAiAH**

In 1910, Archimandrite Panteleimon participated, in a leading position, in the Translation of the Relics of Saint Evfrosinia of Polotsk. This event was such a huge undertaking, perhaps the largest and most important event in the Russian Church in decades, that a book about the Translation of the Relics was partly entitled “Modern Marvels.” Saint Evfrosinia, Abbess of Polotsk, was born in Polotsk in 1110. A pious girl, after refusing a marriage proposal at age 12, she was tonsured into monasticism. In 1128, Bishop Elias of Polotsk charged her with the founding of a women’s monastery. She founded the Savior-Transfiguration Monastery in Polotsk, which still exists to this day. Shortly before her repose, she travelled to Constantinople and the Holy Land, and reposed at the Mar Saba Monastery near Jerusalem in 1173. When Jerusalem was captured by the Egyptian Sultan in 1187, the relics of Saint Evfrosinia were taken to Kiev, and placed in the Kiev Caves Monastery. [9]Ibid.,[10]http://www.odigitria.by/2010/04/23/perenesenie-moshhej-prepodobnoj-evfrosinii-iz-kieva-v-polock/

Beginning in 1832, over the course of seventy years, seven requests were made to the Holy Synod of the Russian Church for the relics of Saint Evfrosinia of Polotsk to be moved to the Monastery that the Saint had founded in Polotsk. The seventh request was granted-on 9 Jun 1909. On 20 Apr 1910, the relics of Saint Evfrosinia were placed in a new cypress sarcophagus. Two days later, after the Divine Liturgy in the Great Church of the Kiev Caves Monastery, Saint Evfrosinia’s relics began the journey home. According to a contemporary account, Archimandrite Panteleimon, Abbot of the Markov Monastery, was among those who led the clergy of the Vitebsk Diocese who had been appointed to accompany the holy relics. Thousands upon thousands of the faithful venerated the Holy Relics of Saint Evfrosinia as they departed Kiev, along the way, and upon arrival in Polotsk. The Holy Relics travelled by boat on the Dnieper River from Kiev to Orsha, a distance of 865 miles, and the remaining 170 to Polotsk were traversed by foot, with the Holy Relics being borne by the hands of the faithful. Archimandrite Panteleimon accompanied the relics over the entire journey. On 23 May 1910, the relics arrived in Polotsk and were placed in a silver reliquary made with donations of the faithful. The Grand Duke Konstantin Nikolaevich, the Grand Duchess and future Royal Martyr Elizabeth, and Queen Olga of Greece joined the festive celebrations. During the journey from Kiev to Polotsk, “many miraculous signs and healings took place,” and were recorded in various periodicals of the Vitebsk and Mogilev Dioceses, as well as separate publications in Kiev, Vitebsk, and Vilna. [11]op. cit. 8,[12]op. cit. 10,[13]http://spas-monastery.by/st_euphrosyne_of_polotsk/worship.php

On 2 Jun 1913, Archimandrite Panteleimon was consecrated to the Episcopate as Bishop of Dvinsk, Vicar of the Diocese of Polotsk & Vitebsk. The consecration took place in the Vitebsk Dormition Cathedral, and was the first Episcopal consecration to ever take place in Vitebsk. The consecration was concelebrated by Bishop Vladimir (Putyata, 1869-1936, later joined renovationists) of Polotsk & Vitebsk, Bishop Veniamin (Kazansky, 1873-1922, later Metropolitan of Petrograd and New Martyr), and other hierarchs. The Diocese of Polotsk & Vitebsk had only been created by the Holy Synod on 30 May 1913. The Vicar of the Diocese, Bishop of Dvinsk, had his residence in the Theophany Monastery in Polotsk. [14]http://sr.isa.ru/~bin/nkws.exe/no_dbpath/ans/nmcalen/?HYZ9EJxGHoxITceUeuKhd81Uv5slTcGhe5srTd4jeC4iedG6XbuDc8rWdOiZe8mifG*cY8uafOuWsOeceG0Dc88Zem0FseLYc8qiceXb8LtmNKNyV8Kfc5tjAnAiAH**,[15]http://krotov.info/history/20/1900/rozhkov_08.htm,[16]www.ortho-rus.ru,[17]http://www.pravenc.ru/text/171494.html