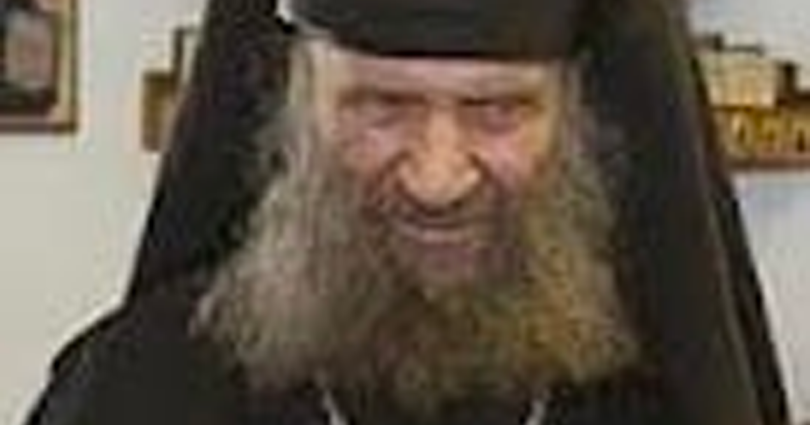 Οn September 4, 2012, Archimandrite Flor (Vanko), the eldest priest of the Russian Orthodox Church Outside of Russia, passed away at the Holy Trinity Monastery in Jordanville, NY.

The Very Rev. Archimandrite Flor was born Vasily Vanko on December 9, 1926 in the village of Shemetkovtsi in Czechoslovakia. He joined the monastery at Ladomirova at a young age.

With the coming of the communists in 1944, he was evacuated together with the brotherhood through Bratislava, Berlin and Geneva. While a novice, he arrived at Holy Trinity Monastery in Jordanville, New York in 1946. He was tonsured a rassaphor monk together with his close friend, the novice Vasily Skurla (the future First Hierarch of the Russian Church Abroad), on March 28, 1947. They received the names Flor and Laurus, in honor of the martyr brothers. The next day, on the feast of the Laudation of the Most Holy Theotokos, they were tonsured readers and subdeacons. On that day, his abbot, Archbishop Vitaly (Maximenko) gave him a Ladomirova prayer book, inscribed with the following words: “To the most honorable subdeacon Flor: may the words of this book never leave your lips. Pray for me as well. †Archbishop Vitaly. March 17/30 1947, Holy Trinity Monastery.” Fr. Flor kept this prayer book as a precious memento of his tonsure.

On the first week of Great Lent in 1948, subdeacons Flor and Laurus became stavrophor monks, together with rassaphor Monk Alypy (Gamanovich), (now Archbishop of Chicago). Fr. Flor was ordained a hierodeacon on September 11, 1950 on the feast of St. John the Baptist, and became a hieromonk on June 28, 1954. All of his tonsures and ordinations were performed by the abbot of the monastery, Archbishop Vitaly (Maximenko) of blessed memory. He was raised to the rank of hegumen in 1967 and received the title of archimandrite in 1996. In 2007, for his many years of service to the Church, Father Flor was given the high honor of wearing two pectoral crosses, but, in keeping with his humility, he wore them rarely, and then out of obedience.

Father Flor emulated the exemplary character of his abbot, Archbishop Vitaly, a strict monk but a caring pastor of his monastic flock. Archimandrite Flor conversed only when necessary. One never saw him speak in the church altar. He was a role model for all the brethren. Once, while working in the kitchen, one of his helpers turned on the exhaust fan. Fr. Flor reacted to this half jokingly: “What sort of exhaust fan did St. Anthony the Great have in the desert?” he asked. His frugality became legendary. He learned many useful skills. Fr. Seraphim (Svezhevskoi) was an amateur electrician and taught Fr. Flor everything he knew. When Fr. Seraphim became bishop and left the monastery, Fr. Flor was left to perform all the electrical work. When asked who had taught him all these skills, he answered: “misfortune and need.”

Fr. Flor was an emigrant in exile for whom asceticism, thriftiness and self-restraint was a way of life. Most who remember him best picture him atop bulldozers and backhoe excavators, as one who never shied away from manual labor.

Holy Trinity Monastery was founded on the same principle as the monastery of the Venerable Job of Pochaev in the Carpathian village of Ladomirova: work is central to daily life. The brethren were accustomed to heavy labor and obediences, accompanied by prayer.  Father Flor attended all compulsory services: daily Compline, Midnight Office and Divine Liturgy, all Sunday and Feastday services, as well as many optional ones (daily vespers and matins). When his health no longer allowed him to come to church, he would follow the services in his monastic cell, hearing them over an intercom that was set up especially for him.

During his final years, Fr. Flor could no longer fulfill his usual monastic obediences. His physical strength was slowly waning. Visits to the hospital became more frequent. The brethren would rejoice each time Fr. Flor came back from a hospital stay. When back in the medical ward, the personnel were glad to witness a true Christian struggler.

Despite his outward austerity, Fr. Flor adhered to the best Russian monastic tradition of serving one’s neighbor. He was frequently sent to the Annunciation convent in London, England to perform the services of Passion and Bright week. Invariably, before leaving for his duties overseas, he would spend all of the fifth week of Great Lent in the bakery, preparing kulich Easter breads for the monastery brethren and neighbors. His practice was to hang a bag with a freshly baked kulich on a neighbor’s front door handle in the wee hours of the morning and then disappear.

Fr. Flor had difficulty accepting the reconciliation of the Russian Orthodox Church Outside of Russia with the Moscow Patriarchate. He had a genuine stewardly concern for his Church, fearing unseen underwater boulders in the path ahead. But time showed that his concerns were unwarranted and his personal position on the question softened.

Though outwardly seeming to be a simple monk, Fr. Flor had an extensive worldview. To his very last days he was concerned that the monastery was not doing enough for its American neighbors. One of his notions was to “put Christ back into Christmas.” He wanted to purchase a page in the local newspaper and print an article explaining what exactly was being celebrated on December 25.

Fr. Flor celebrated his Namesday on 18/31 August in full consciousness. On September 4 at 5 a.m., he departed to go the way of all the earth (1Kings 2:2). On Wednesday, September 5, the First Hierarch of the Russian Church Abroad, His Eminence Hilarion, Metropolitan of Eastern America & New York, led the funeral of the newly departed Archimandrite. His Eminence was co-served by the Administrator of the Chicago and Mid-American Diocese, His Grace Bishop Peter of Cleveland, His Grace, Eastern American Diocesan vicar Bishop George of Mayfield, and a multitude of clergy from all of the Church Abroad. The Protodeacon of the monastery, Fr. Victor Lochmatow delivered a heartfelt eulogy. He had known Fr. Flor for more than half a century. Father Victor spoke of his personal experiences as well as the life and legacy of this unique man, as the last of the monks to have emigrated to the United States from Ladomirová, the original home of Holy Trinity’s monastic brotherhood.

Father is remembered by generations of young men who came to the monastery to spend their summer vacations. Many of those who worked with him on the various monastery obediences as seminarians later became priests. He is remembered and respected by the elderly farmers — neighbors of the monastery. We will miss Fr. Flor. With his departure, the living Ladomirova tradition ends. We believe and hope that he has reached the heavenly abodes and has joined his brother in tonsure, our father Vladyka Laurus, along with the other brethren of our St. Job Monastery and prays for us in the “unending day” of the Kingdom of Christ.