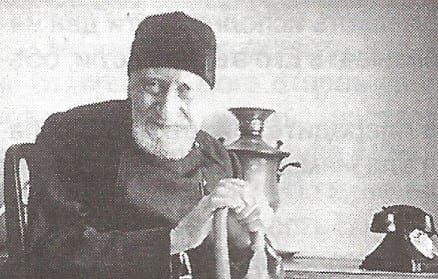 It is hard to write, briefly about the late Father George, Cheremeteff in that  he was a man richly gifted by God and one who had, moreover, made profitable use of the talents entrusted to him.

He received a broad education on sound foundations and graduated in the Faculty of History and Philology at St. Petersburg University. He then decided, of his own-accord, to enter the Army, enlisting in the Regiment of the Cavalier Guards. His period of training recruits gave him the chance to meet types of men from a variety of the provinces of Mother Russia.His dexterity in communicating with people and going straight to their hearts evoked their love not only among officers, but also among the lower ranks, who in gratitude gave him a painted triptych with a moving inscription on its reverse side.

His living faith in God, his deep love for his Mother Country, loyal devotion to his Sovereign, confidence in the resurrection of Holy Russia, a rare knowledge of the history of the Fatherland, and not only of Russian but of European literature, made him interesting and instructive in conversation.

He used to show to friends his little note-books in which, even in his younger years and, later, as a gay and brilliant officer heentered everything that interested or stirred him; already, at that time, they contained extracts from the Dobrotolubiie (the Phiiokalia) on prayer and spiritual attainment.

Following the death of our former priest, Father George was for five years our spiritual guide; and in that time we came to know, him, still better and to value him as a rare spiritual shepherd. Father George loved and knew how to pray and to entreat with prayer, warmly, from the heart, and with singleness of mind.

Invariably benevolent, painstakingly well-mannered, cheerful, he knew how to support and to console and, when it was needful, he could give instruction even sternly.

Being quite disinterested, he was unconcernedly capable of giving to someone in need literally the last thing he possessed. With his aristocratic origin, he was, at the same time, of a rare modesty; for all of us he was an example of humility and Christian love.

For him, a soul was precious, no matter whether the person was cultured or an ignoramus, rich and famous or a simple pauper, old and young, a. fellow countryman or a native of another country; he could approach each person with full-attention and give something luminous, something unforgettable, as people often remarked, even those who had only once chanced to meet him.

His excellent knowledge of languages gave the possibility not only for Russians but also for another nationalities to profit from his spiritual direction. Without hesitations and in their due order he officiated services for non-Russians in their own languages, and likewise he worked on translations of spiritual texts-into English.

Despite the weakness of old age and chronic ill health, Father George’s self-denial-overcame these disabilities and he assiduously celebrated the Services in the Convent, visited the sick and the dying, everywhere bringing with him peace and comfort.

The Services, thanks to his prayerfulness and to his musical and perfect ear, went in complete harmony with the Convent choir. And with what warmth and fervor he made mention of names!  It was necessary only to see his list of hundreds of names of the living, the sick, the sorrowing, of those suffering persecution and exile, as also of the dead, starting with past Sovereigns, soldiers, clergy and by name all those tormented to death by powers hostile to God, together with friends, relatives and those whom he had actually buried or for whom he had read the burial service in the event of their not having had an Orthodox burial.

The last time that Father George officiated in the Convent was on the Sunday of the Triumph of Orthodoxy. On the eve of the service there came for confession some fifty persons, and all of them were deeply moved by his spiritual directions. Who could forsee that it was for the last time? Father George fell ill, was in hospital, and afterwards for six weeks stayed with a friend in the country where he was prepared for a beautiful departure,

Only a few days from Mid-Pentecost he returned to London. In his last days he often repeated that he was tired and had become old, but even so one did not believe that his end was so near. He was comforted by the fact that, despite his weaknesses, he, could still look; after himself and was a burden to nobody. He often said to me ‘Matushka, death is not frightening, but dying is difficult!’

And the Lord called him to Himself swiftly and without pain.

At Mid-Pentecost, in the evening, I was at ‘his house with my Assistant Nun and he was happy at having come home and that he had succeeded in putting in order his papers, belongings and correspondence. On our taking leave, he said: ‘If, it be God’s ‘will and I am alive, I will officiate with you on Sunday’, He came with us to the steps at the front door of the house and blessed us several times like a loving father until we were out of his sight. Not more than three-quarters of an hour later we had returned to the Convent; suddenly there was a telephone call: it had happened, Father George had died. He had been found dead oh the floor of his cell.

On the festival of Mid-Pentecost (April 29/May 12, 1971) the Lord took to Himself, our beloved Father George – exactly by token of the fact that his life on earth had been fulfilled.

The ninth day coincided with the feast when the Holy Church commemorates the venerable symbol of the Lord’s Cross in Jerusalem, as a sign that Father George really and truly bore the Cross to his death.

We were the last to receive his beloved blessings, and the first to be honoured to bring prayers for the peace of his luminous soul beside his remains. On the third day his body was brought to the Convent for the funeral Liturgy and Panixida. Although it was a working day of the week many devout persons came, even some who were not Orthodox, but all were devoted to Father George.

One felt in the Church a genuine grief, yet by no means a dark but a luminous and peacegiving rejoicing for him in his death.

The burial service was in the Cathedral, performed by a throng of clergy, four priests and two deacons, presided over by Vladika Archbishop Nikodem. The singing was by the choir of the Sisters in accordance with Fr. George’s wishes, and it created aspecially prayerful mood.

The leave taking by all those who loved Father George attracted many people wishing to bestow the last honours of grateful love.

One man who came from the background of ‘D.Ps’ said ‘I had to come and pray and ask pardon from Father George, for he taught me how to struggle against sins’.

In the cemetery there were many people. His grave was smothered with flowers, crosses, garlands and touching little bouquets.

It is noteworthy that the 40th day falls on the feast of All Saints in the Russian Land of the Blessed.

Simple, self-forgetting, loving all men, Archpriest George, filled with years of fruitful spiritual harvesting, quietly withdrew to the Lord leaving behind him his own luminous memory.

Without doubt, many souls, even of embittered persons, were given peace and were spiritually the better, from having met on their way Father George.