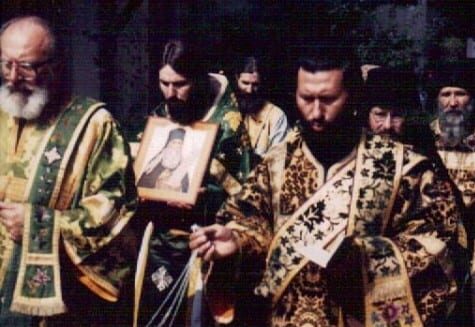 In the name of the Father and of the Son and of the Holy Spirit!
Beloved brothers and sisters in Christ,Through the prophet David, the Lord has defined the life of man:

“The days of our years are threescore years and ten; and if by reason of strength they be fourscore years, yet is their strength labour and sorrow; for it is soon cut off, and we fly away.” (Psalm 90:10)
Our late Fr. John worked hard during his life but toward the end he fell ill.In spite of these hardships he expressed the following: “The years I spent here at the monastery were the happiest years of my life! It brought me great joy and true happiness.”Protodeacon John was not a monk, but life at the monastery and the monastic way of life were more important to him than anything else in the world. Being completely devoted to God and the church, Fr. John strove to serve both to the end.

Fr.John was born in Kharkov, home of many bishops and monks of our Russian Church Abroad; notably St. John of Shanghai and San Francisco.

Protodeacon John was  born in 1926 into a pious religious family. By the end of the Second World War, the Onopko family (the parents, the future John and his brother) moved to Germany. They lived in a camp named Fishbeck for displaced persons.The Onopko family came to America in 1950 through the efforts of Fr. Manuel, the future Bishop Constantine (Yesenskii) who at that time was rector of the church in Washington, D.C..The Onopko family worked on a farm in the state of Maryland. A few years later, they moved to Cleveland, Ohio. Ivan Onopko went to work in a factory which manufactured paints and soon he was promoted to the position of foreman.

However, for the future protodeacon, church and servitude to God remained his foremost priority. He greatly loved to participate in the liturgy, reading on chliros of his beloved church-St.Sergius of Radonezh! The rector, Archpriest Mikhail Smirnov, didn&apos;t start the service without  Vania Onopko. Furthermore, the family never missed church services.

The following example expresses the piety of the Onopko family. In 1966, Archbishop John of San Francisco passed away unexpectedly. The future Metropolitan Laurus , Archbishops Averky and Leonti of Chile, drove by car from Jordanville to San Francisco. As in Old Testament, the righteous Abraham met the Lord in the form of three strangers/angelic stranger, so too the Onopko family, in the middle of the night, waited to welcome the three servants of God, so that they may rest and gather their strength on the way to California. 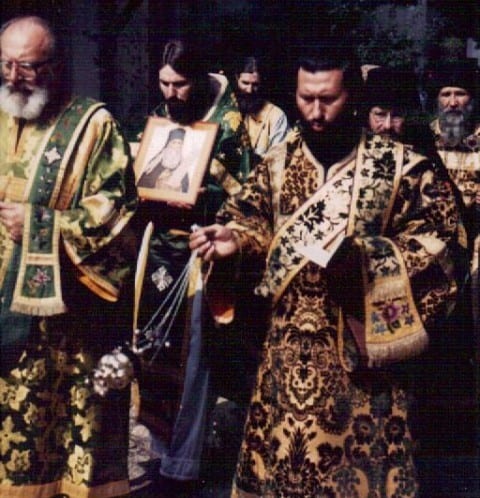 I must say that Fr, John was a wonderful man. He did not like luxury for himself but when it came to adorning the temple, he spared no expense. Did you know that Fr. John donated brocade vestments to the monastery in memory of his brother and parents. The vestments adorn our monastery to this day. Unable to serve, due to leg problems, Fr.John was happy and most grateful when someone else served wearing his diaconate vestments. And if Fr. John noticed any need in the church, he was ready and eager to help. When Archbishop Laurus organized dependency in Russia Fr. John made an essential contribution toward that goal.

Six to eight months ago, Fr. John began to experience pain. He finally sought help from doctors and was immediately hospitalized, but soon he was released because nothing more could be done. During this time he remained happy and in good spirits; as if this was a peaceful time for him. He never complained, despite his increasing frailty.A few days prior to his repose, I went to see him – he had only one request;”Try to make sure that the coffin is made of wood”.

May you find the rest in the Kingdom of Heaven be yours, dear Father John!Amen.