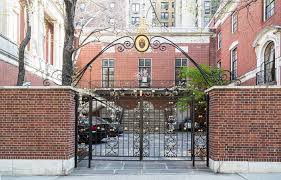 Deacon Andrei Psarev: [Can you tell us] also about your visit to Synod in New York. How was it?

Reader John Johnson: Well, I had a friend who was an actor in New York City. Very famous American actor, Harvey Keitel was his roommate but this was long before. I used to spend a lot of time in New York in the 60s when I went once to a Church and I felt very intimidated that people so beautifully dressed and it was so obvious they were very aristocratic. Beautiful. Extraordinary. Seeing it was wonderful. I felt very much like an outsider. That all came back to me one time when my wife and I went to London, years later and we went into Westminster Abbey on a Sunday morning and they have a service there where it was almost kind of private behind the altar and everybody sitting there looked like Prince Phillip, they’re all wearing very formal clothing. Ladies with hats and things. This reminds me of the Russian Church in New York

DAP: The one who was in a production, like Anastaia.

RJJ: Oh! Sorry! Yes! I know. I had this great friend who was in Hanfield. He’s probably famous for a film. I remember him well on American television in the 40s and 50s. I’m sorry, in the 50s. He was in the original, his most famous film was called Portrait of Dorian Gray, but he was on the original stage play of Anastasiawith an actress called… While he was in that play various people came to see it and he met Prince Yusupov and his wife. In fact, in his house he had a signed photograph of Prince Yusupov and he went into the church too, he was invited with famous actors in Broadway, you know what I mean, so he stood at the back so nobody could see him.