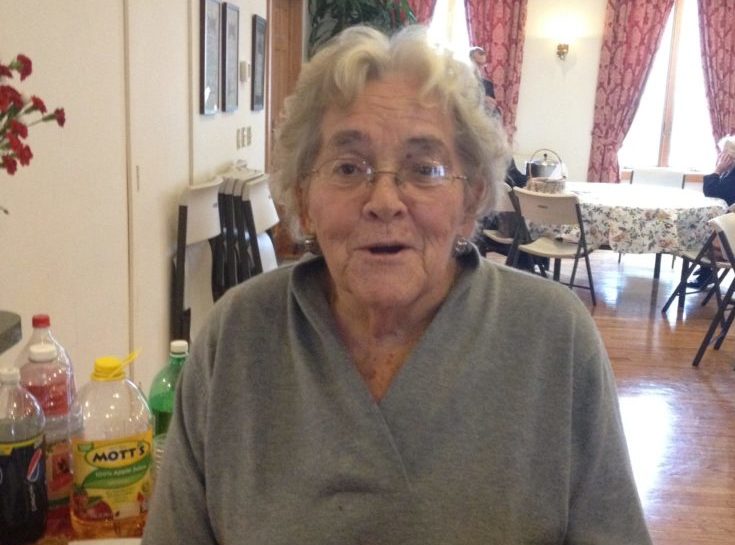 The Shishkov family was very churchly. Both my grandfather and my great-grandfather were churchly. My great-grandfather held an office at the Holy Synod in Moscow and established a school for church singing. All of my childhood memories of my father in St. Petersburg are connected with the church, because our whole family always went to church.

The Shishkov family was very churchly. Both my grandfather and my great-grandfather were churchly. My great-grandfather held an office at the Holy Synod in Moscow and established a school for church singing. All of my childhood memories of my father in St. Petersburg are connected with the church, because our whole family always went to church.

I was born in Serbia. We lived in Panchevo, near Belgrade. My brother served in the sanctuary from the time he was seven years old. I remember Fr. Vitaly Tarasyev well. Fr. Peter Belovidov was very warm. I remember Fr. John Sokal.

Vladyka Anastasii loved solemn church services very much. My favorite service was the Exaltation of the Cross. When St. John of Shanghai came (he was a distant relative of my husband), Metropolitan Anastasii told him to put on a festive vestment. But St. John had brought with him a shantung rassa and a folded-up mitre. But Vladyka Anastasii loved solemnity very much. He had one vestment that he would only wear at Matins. It was very heavy. He was already so old, but all the same in New York he would put on that vestment. My brother Volodya was a subdeacon, and he used to say that they practically had to drag him.

The beauty and solemnity of the divine services remain in my memory. They had a nourishing influence. We always went to Lenten Vespers. When Metropolitan Anastasii came out to give the Paschal greeting to the praying people, he would be radiant; you couldn’t help but feel how beautiful it was.

In 1941, when my brother was seven years old, they found a tumor inside him the size of a baby’s head. There would have to be an operation. The night before the operation they brought the Kursk-Root icon of the Theotokos and the skuffa of St. Holy Righteous John of Kronstadt. They served a Moleben. Aunt Marisha stayed overnight in the room with him. When we came to the operation she asked them to do another x-ray, since Volodya’s fever had gone down. They did the x-ray and didn’t find anything.

Many years passed and Volodya got married. Then he had to have his gall bladder removed. We had a step-sister named Natasha Pokrovskaya. She was a nurse and was with Volodya for the operation. She asked my mother, “What was in Volodya’s abdomen?”

“There was nothing in his abdomen.”

“The doctor said that there are seams all through him, but he was surprised that he didn’t see any scarring.” Then mama remembered: “These seams are from that tumor.” And so really had the awful tumor, which had left these seams. We had proof of his healing by the Mother of God.

In 1945 Volodya was eighteen. Papa didn’t want the Germans to draft him, so he enlisted him in the Russian Liberation Army. There was a man there who had studied with papa in high school in Kostroma. Papa wrote to him, and when the man confirmed their acquaintance, he sent Volodya there. He didn’t participate in the fighting.

When we were leaving Munich for America my papa went to Metropolitan Anastasii and asked him where we should go to church when we got to America. He told us to go to Bathgate Avenue, where Vladyka Vitaly (Maximenko) was serving.

When we’d arrived in America we went to that cathedral in the Bronx. Vladyka Vitaly was very spiritual. I remember that once someone was reading the epistle and lost his place. Vladyka turned around and said, “Don’t worry. You’re reading to the Lord God, not to the people.” In Jordanville he worked the land, ploughed, rode the tractor. He went about year round in a single rassa, and he would joke with Vladyka Metropolitan Anastasii, saying “What, are you freezing? ” Vladyka Vitaly and Vladyka Metropolitan Anastasii (Gribanovskii) were exact opposites from one another.

When the Bishop Synod came to the USA, we moved to New York. Archbishop Nikon lived at the cathedral in the Bronx right up to his death. After the building in the Bronx was sold, the parish and the priest (Fr. Panteleev) had no home. With the money from the sale we bought a large property in Glen Cove with four acres of land. There we turned the ballroom into a church. The offices of the North-American diocese were there. There was a treasure, my husband, and a secretary.

I was opposed to the union with the Moscow Patriarchate. I thought that it should have been done differently. I express myself directly. I am opinionated. I remember a meeting with Vladyka Andrei of Rockland where some question was asked, and Vladyka Andrei said, “Now you be quiet, Mashenka.” My father taught us that we should be able to argue while treating our interlocutors with respect. When you argue you should demonstrate your view. When it’s disputed, you can change your view, or you else become more convinced that you’re right.

Vladyka Averky was opposed to dances. He considered them to be something horrible. Once at the All-Night Vigil he gave a sermon in order to keep the young people around. Then he asked my brother, “Well, did I keep them around?” My brother said, “Take a look, Vladyka, and see who’s in church.” There was one person.

Our family was very close. My cousin, Fr. Alexander Schmemman was a great intellectual, but I didn’t agree with him. When Fr. Alexander visited my father here in New York, my father argued with him about the autocephaly [of the American Metropolia]. Fr. Alexander said that we had swallow the bitter pill, but my father said “That’s not how it should be in the church.” Fr. Alexander’s idea was that all the churches in the USA would merge into a single autocephalous church. But it didn’t happen that way.

They [the Schmemmans] won a lottery in France and came to Serbia, just as my grandparents were celebrating their fiftieth wedding anniversary. They came, but they would have stayed there longer if the war hadn’t started. Fr. Alexander visited the cadet corps. When my husband was living in Paris he became friends with Fr. Alexander’s twin brother, Andrei. When he was coming to America Andrei told him, “Now you go to New York and marry my cousin,” (meaning my older sister). When he got here he made sure he found out where these Shishkovs were.

Two of my father’s brothers served in the Semenovsky regiment, and through them my aunt Anna Tikhonovna got acquainted with their friend Dmitri Nikolaevich Schmemman, whom she married. These were Fr. Alexander’s parents.

Fr. Alexander was great at giving lectures, but his testimony under oath during the litigations between the Russian Church Abroad and the North American Metropolia (after the acceptance of autocephaly in 1970) was something else altogether. Everyone knew that the Kazan parish belonged to the ROCOR, that it was consecrated by Archbishop Vitaly (Maximenko), that the first priest was Fr. Vasily Musin-Pushkin. Every witness who took part in the proceedings had to be approved by both sides as an expert in his field. If I had finished seminary I still wouldn’t have learned as much as I did at this trial, because every canonical issue was very minutely analyzed. It was like each side was trying to “drown” the other.