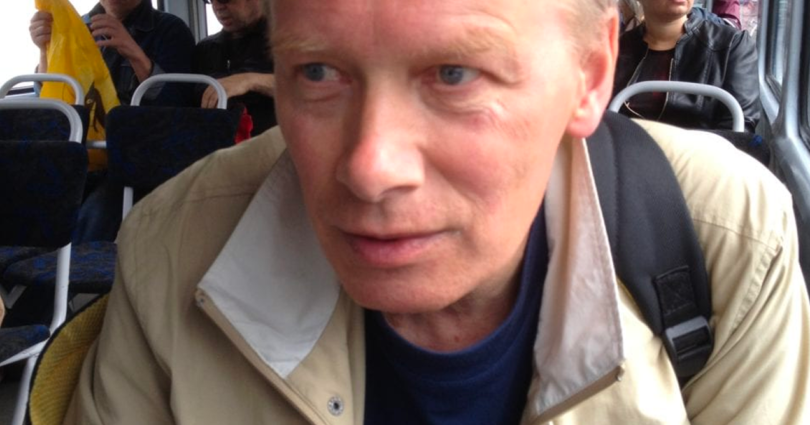 Dr. Aleksandr Valentinovich Gavrilin is an Associate Professor at the Faculty of History and Philosophy of the University of Latvia.  Born in Riga on July 15, 1953, he graduated from the Latvian State University, Faculty of History and Philosophy, in 1975.  He has authored more than one-hundred scholarly publications on the history of the Orthodox Church, sacred architecture, Old Believer tradition, and the preservation of cultural heritage.

His publications include several books, such as: Essays on the History of the Diocese of Riga in the 19th Century (Riga: Filokalia, 1999; in Russian), The Ludza Deanery of the Diocese of Polotsk and Vitebsk in the second half of the 19th and the beginning of the 20th century (Riga: Philokalia, 2004; second, expanded edition, 2013; in Russian);  Under the Protection of the Tikhvin Icon: the Archpastoral Path of John Garklavs (St Petersburg: Alaborg/Tikhvin: Tikhvin Monastery, 2009; in Russian);  Latvian Orthodox Clergy on the American Continent (Moscow, 2013).  He has edited nine issues of the collections of scholarly essays Orthodoxy in Latvia: Historical Essays (1993- 2011; in Russian) and The Problems of Preservation of the Heritage of Latvian Material Culture (Riga: University of Latvia, 2008-13; in Latvian).  He is the editor-in-chief of the journal Orthodoxy in the Baltic States (2012) and the editor of the essay collection Riga Old Believer Compendium (2011), etc.

Dear Prof. Gavrilin, could you reflect on why the Orthodox Church in Latvia never became part of the Russian Church Abroad after Latvia gained its independence in 1918?

Since the time when the independent Latvian state was founded, the situation of the Orthodox Church on the territory of Latvia has changed dramatically.  In the Baltic provinces of the Russian Empire, the state openly supported and protected the Orthodox Church, but during the first years after the Republic of Latvia came into existence, the majority of the Latvian society perceived the Orthodox Church as a relic of the Tsarist regime and an instrument of Russification.

What made the situation even more difficult was the fact that the last Administrator of the Diocese of Riga, Bishop Platon (Kul’bush) of Revel (1869-1919; canonized as Hieromartyr) was brutally murdered by the Bolsheviks in January 1919, and consequently, the diocese was left without a hierarch.  In February and August 1920, the assemblies of delegates from all Orthodox parishes of Latvia decided that the Latvian Orthodox Church (LOC) should be self-governing and independent about administration and economic affairs, and in its relations with the state authorities of Latvia, but concerning hierarchal order, it will continue to maintain its canonical ties with the Russian Orthodox Church.

Moreover, these assemblies resolved to invite Archbishop John (Pommers; 1876-1934, canonized as Hieromartyr) of Penza and Saratov to be the head of the Latvian Orthodox Church.  It is important to note that the Most Holy Patriarch Tikhon of Moscow and All Russia (Bellavin; 1865-1925, canonized as Holy Confessor) approved the choice of the Latvian Orthodox, and on July 19, 1921 granted to LOC independence in the areas of church management, administration, education, and civil affairs.  Thus, until 1936 (when it was received into the jurisdiction of the Ecumenical Patriarchate), LOC had a canonical status, approved by the Patriarch, which it did not see any reason to change.  Meanwhile, many church hierarchs questioned the canonical status of the Russian Church Abroad.

One also has to keep in mind that native Latvian parishes constituted about a half of all parishes of the Latvian Orthodox Church.  Latvians had a wary, even adversarial attitude towards all that reminded them of the past, about the Tsarist regime.  At the same time, the leadership of ROCOR never made a secret of their monarchist sentiments.  But neither did the Russian population of Latvia have a very positive attitude toward Russian émigrés and émigré organizations.

Native Russian population here tended not to share the émigré political views and did not support their compatriots who found themselves in diaspora.  The Latvian Russian population were mostly Old Believers by their religious affiliation, who experienced persecution on the part of the Russian imperial government.  For this reason, unlike the émigrés, they did not consider themselves as being part of Russia in exile, did not have any nostalgia for the bygone Russia, nor did they feel sorrow for the collapse of the great empire.  Quite on the contrary, these people tended to welcome the regime change and tried to demonstrate their loyalty for the newly formed country.

This milieu did not only fail to support the émigrés, but moreover, very often the latter were turned away as potential opponents to the young independent state.  The difference between the newcomers (émigrés) and the local Russian populace did not amount only to a difference in legal status, but also reflected a divergent psychological sense of identity: the local Russians were “at home,” while the former, “humiliated and insulted,” were in exile and, to add insult to injury, in the former Livonian, Courland, and Vitebsk governorates of the Russian Empire!

The difference also lay in the divergence of religious beliefs: the majority of Latvia’s native Russian population were Old Believers, while the newcomers were Orthodox, that is, “the accursed Nikonians.”  There was also a significant education gap between the émigré intelligentsia and Latvia’s poorly educated peasant Russian population.  One must also not forget that in 1920s among workers in Latvia, the position of Social Democrats and, sometimes, of the Communists who were sympathetic to the changes in Russia itself, were still quite strong.  This milieu perceived the émigrés with open animosity.  And consequently, the majority of Latvia’s population, both Latvians and Russians, were not enthusiastic for any Russian émigré organizations which were situated outside of the Latvian borders.

What do we know about the attitude toward ROCOR on the part of the Latvian state authorities in the period between the two World Wars?

We do not possess direct historical evidence regarding the attitude of the state official autorities of the Republic of Latvia toward ROCOR, but one can imagine it being extremely negative.  One must not forget that the largest party in the Saeima (parliament) of Latvia were Social Democrats, i.e. materialists, for whom church issues were simply non-existent.  Moreover, as I have already noted, in Latvia during the interwar period, Russian émigrés, including ROCOR, were associated with the Tsarist Russia, with the monarchy, i.e. with the “wretched past.”

By the way, Holy Hieromartyr John (Pommers) was often accused of being a monarchist from the Saeima’s podium.  In response, the head of the Latvian Orthodox Church asked to show proof of him expressing such views, but there was no evidence to show.  In general, the term “monarchist” was an insult in the interwar Latvia, and the Russian émigrés were viewed as the “fifth column.”

In this, Latvia was not an exception.  The governing elites of all former national border regions of the Imperial Russia, which received independence after World War I, tended to be wary of the Russian émigrés and of their main spiritual force – the Russian Church Abroad.

What kind of a relationship there was between the Hieromartyr John (Pommers) and the Russian Church Abroad?

It should be said that in the first half of the 1920th, Hieromartyr Archbishop John (Pommers) was regularly corresponding with Metropolitan Antony (Khrapovitsky).  The latter, in his letters, addressed Vladyka John as “Vladyko, my friend,” “my friend and Vladyko,” “dear Vladyko,” and so forth.  The letters were wholly business-like, but judging by the content of Metropolitan Antony’s letters, which are preserved among the Archbishop John’s files at the Latvian State Historical Archive, the relationship between two archpastors was a friendly one.

Moreover, Archbishop John also corresponded with Archimandrite Vitaly (Maksimenko), later – a renowned archpastor of the Russian Church Abroad.  At the same time, regardless of repeated invitations, Archbishop John never attended any of the Councils of ROCOR.  Respecting the canonical status of the Latvian Orthodox Church, no one insisted on his coming. Still, the very fact that the head of LOC was invited to the councils of ROCOR demonstrates the respect that his personality evoked among the hierarchs of the Church Abroad.

Who among the ROCOR clergy has ever been to Latvia?

None of the ROCOR bishops has ever been to Latvia, because the Foreign Ministry of Latvia was eager to prevent any visits of this kind, which could spiritually strengthen Russian émigrés and thus interfere with their integration into the Latvian society.  None of the visits of the ROCOR clergy were made public by the administration of the Latvian Orthodox Church, lest the Church again be accused of monarchist sentiment or nostalgia for the old regime, i.e., of disloyalty to the Latvian state.  For this reason, LOC did not publicize its contacts with émigré organizations within Latvia, and even less with émigré organizations abroad.  We know of occasions when ROCOR clerics visited Latvia, but all these visits were brief and unofficial.

Tell us about the clerics of the Latvian Orthodox Church who joined ROCOR.

Clerics of the LOC started coming into ROCOR already at the very end of World War II or immediately after the war.  There were various reasons for this.  Some clergy members joined ROCOR when they became evacuees and later emigres on the canonical territory of ROCOR. These were Frs. Victor and Arseny Kolibersky, in 1944-45 – Fr Leonid Ladinsky, Fr. Michael Zhelneronok, Fr. Alexey Ionov, Fr. Theodore Mikhailov, Fr. Alexander Dribintsev, Fr John Molotok, Fr Theodore Yagodin, Fr John Liepiņš, Fr George Benigsen; from 1948 – Fr John Baumanis, and others.  For some of the clergy, like Fr John Legkiy, their transfer to ROCOR was justified by their ideological position, their closeness to the views of ROCOR, and their conviction that the Council of Bishops of the Church Abroad was on the right path.

It has to be noted that in his letters to Bishop John (Garklavs) and Metropolitan Augustīns (Petersons), Metropolitan Anastasy (Gribanovsky) frequently remarked that the priests of Latvian extraction were among the best of the ROCOR clergy.  I have written about some of these priests in my recent book Latvian Orthodox Clergy in America.

What was the nature of the relations between the Russian Church Abroad and other churches in the Baltic States?

In the interwar period, the Orthodox Church in Lithuania was considered to be the Lithuanian diocese of the Moscow Patriarchate, and therefore it reflected Moscow’s official position.  Its ruling hierarch, Archbishop Elevferiy (Bogoyavlensky), recognized the lawful status of ROCOR until 1927, i.e., until the Declaration of Metropolitan Sergius, but after 1927 he ceased all relations with ROCOR.

Moreover, as is well known, in 1923 the Council of Bishops of ROCOR rejected the liturgical use of the New Calendar and other reforms accepted by the Pan-Orthodox Congress in Constantinople under the leadership of Patriarch Meletios IV.  The flagrant interference of the Patriarchate of Constantinople in the affairs of the Russian Orthodox Church, which was constantly condemned by ROCOR, also did not contribute to the improvement of the relations between ROCOR and the Ecumenical Patriarchate.

The Polish Orthodox Church declared its autocephaly in 1924, which was not recognized by the Moscow Patriarchate.  The 1926 Council of Bishops of ROCOR likewise refused to recognize the autocephaly of the Polish Church.  The next Council of Bishops in 1927 restored communion between ROCOR and the Polish hierarchs, but only the spiritually, without recognizing their autocephaly, for ROCOR thought that this decision may only be taken by the Mother Church, i.e. the Russian Church.  Thus, ROCOR could not have had a close relationship with either the Lithuanian diocese, or with the EAOC or with the Polish Orthodox Church.