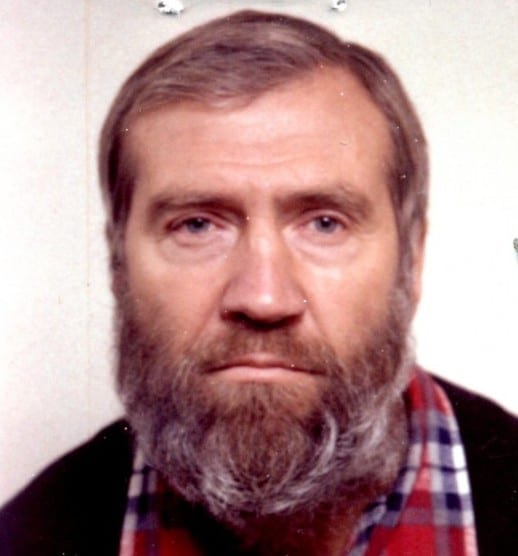 Genadii Genadievich Busygin was born on April 21, 1937 in Leningrad. His father was a military pilot of Vatkian peasant stock. His mother was born in St. Petersburg into the family of a typographer and spent most of her life working in a sewing factory, and in a porcelain factory in Lomonosov. In April 1944, after returning to Leningrad from the evacuation [due to the German siege], Gena was baptized in the Cathedral of St. Nikolas.

In 1959, Genadii graduated from the Institute for Rail-transport Engineers. From 1959 until 1983 he worked for the design firms of Leningrad. From 1963 until 1983, he worked for the “GIPRONIKEL” institute, and then as a mechanic for refrigerated train cars, accompanying the trains. In 1987, Genadii returned to “GIPRONIKELl” and worked there as cheif engineer until his departure for America. In 1990, he finally got an opportunity to come to America, invited by some friends. It turned out that his friends were not inclined to help him get established, and so he came to Holy Trinity Monastery.

Fr. George Zelenin, in a eulogy for Genadii delivered at the Archangel Michael Cathedral in Patterson, NJ on the day after his burial, remarked: “America! This was the promised land which Genadii strove to reach all his life.”

On October 13, 1990, Archbishop Laurus made the following decision in response to Genadii’s request [to enter the seminary]: “Let him try it out. If he attends classes, then he may continue.” Genadii’s spiritual father was Hegumen Gurii.

Genadii’s class consisted of eighteen men. This was the first seminary class that was composed mostly of people who had come from the USSR. Genadii was among the seven men who graduated in 1994.

Genadii had an obedience in the garden with Hierodeacon Zosima, who used to be very demanding with his laborers. But Fr. Zosima took care of those who were able to endure with him. (He even found a bride for Genadii.) Genadii also worked as a grave-digger in the monastery cemetery.

He loved to run for sport. Once Genadii went to the seminary and everyone shied away from him. It turned out that he had pet a skunk. He himself hadn’t even noticed the smell.

Genadii was a friendly and equitable man. But he had one weakness: he drank. He was normally very economical, but when he drank, “he threw money about like he was sowing seeds. When he was drunk, a hidden person woke up in him, not at all stingy. This was his real nature: a merciful, kind, Russian man.” (from the eulogy of Protopriest George Zelenin)

“To return to Russia from the promised land would have meant the collapse of Genadii’s whole life. Staying here gave him a reason to live” (From Fr. George’s eulogy) So, like many others, he remained in America without a visa.

On January 17, 2014, Genadii died in a shelter in Buffalo. He was going to be cremated, using the minimal means available for disposing of homeless people. But Sophie Feal, an immigration lawyer from Buffalo, showed kindness and interest for this man, a perfect stranger to her. She informed the monastery of the passing of the Servant of God Genadii, and found the money for him to be buried with Orthodox rites. Thus she prevented Genadii’s impending cremation. On the monastery’s side, Protodeacon Victor Lokhmatov took great pains to ensure Genadii’s burial.

On January 25, Genadii’s funeral was served in the cemetery church by his classmate Protopriest George Zelenin, assisted by another classmate, Deacon Andrei Psarev. Because of the frozen ground, the grave had not been dug completely. So Genadii was buried on Monday, January 27. The seminarians who had prepared his grave also sang at his burial.

From Fr. George’s Eulogy: “Genadii has found rest in the soil of Holy Trinity Monastery. In this way America has become the promised land for him.”