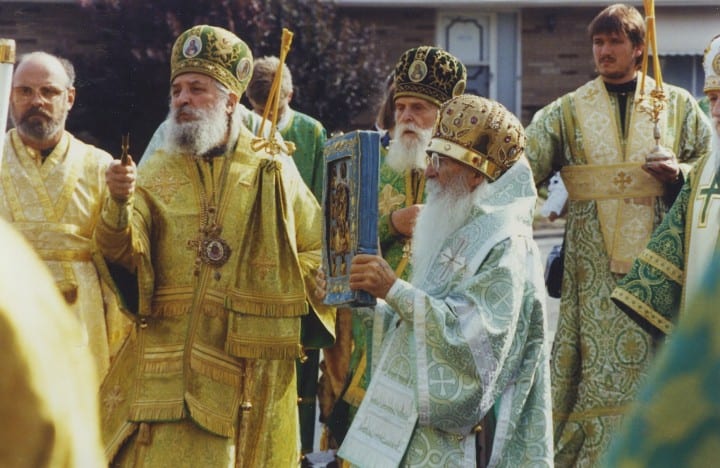 it had only been two years since the consecrations of Bishops Varnava (Prokofieff) and Lazarus (Zhurbenko) were revealed publicly-both had been consecrated secretly. Bishop Veniamin (Rusalenko) had only been consecrated only a year earlier. Much protest arose from the Moscow Patriarchate, and the other Orthodox Churches … The distressing eviction of monks of the Russian Orthodox Church Outside of Russia from the Skete of the Holy Prophet Elias, and their ejection from Mount Athos, were undoubtedly related to the controversy. The climate became tense, as well, here in the United States.

This is a short presentation given at Sergius conference by an independent scholar from Dayton, OH, who is also a long-time friend and contributor to this site.

The Russian Church is a great celebrator of anniversaries of significant events and persons in its history. On occasion, these anniversaries can seem a to be somewhat overdone to us here in America. We can certainly understand great celebrations for the 1,000th anniversary of the Baptism of Russia. But the 950th, or 1,025th? These are not at all as “excessive” as they might seem on first glance; it is important to keep these holy events alive in the minds of the faithful, as a holy heritage bequeathed by the Church.  Also, it must be noted that these anniversaries are not merely a meaningless observance of significant dates and events, but often focus on what is being commemorated in relation to contemporary events and situations. Indeed, this was the case with

the celebration of the 1,025th Anniversary of the Baptism of Russia, as it was celebrated in order to emphasize the complete change of circumstances, and amazing growth of the Russian Church since the 1,000th anniversary only twenty five years before 1988, which seems an age that is quite remote from us today.

In 1892, celebrations for the 500th anniversary of the repose of Saint Sergius of Radonezh began with a procession from the Moscow Kremlin to the Holy Trinity-Saint Sergius Lavra, led by clergy bearing icons, followed by “many thousands of pilgrims,” that took three days to arrive at the Lavra, where services were presided over by Metropolitan Leonty (Lebedinsky, +1893) of Moscow and Kolomna,  and Sacred

Archimandrite of the Holy Trinity-Saint Sergius Lavra. “Huge masses of pilgrims surrounded the Lavra,” who had come from all over Russia, and did not leave for days after the end of the celebrations, awaiting their turn to enter the Holy Trinity Cathedral, and venerate the holy relics of Saint Sergius of Radonezh. At the time, it was remarked that there had never been such a celebration before, as regarded the great number of faithful who participated. [1]

During these celebrations, at a conference or symposium that shared some similarities to this very one, a young Archimandrite, who was also Rector of the Moscow Theological Academy, presented a “report,” entitled “The Moral Idea of the Dogma of the Holy Trinity.” This young Archimandrite was the future Metropolitan Antony (Khrapovitsky, +1936), who was just then beginning to “blossom as a theologian,” and was later the primary architect and wise guide of the Russian Orthodox Church Outside of Russia. [2] In a relatively short time after the 500th anniversary of the repose of Saint Sergius of Radonezh in 1892, the very existence of the Russian Church was under dire threat. Shortly thereafter, the Russian Orthodox Church Outside of Russia was created, in an attempt to escape the complete annihilation of the Russian Church, which seemed an imminent possibility to many. While complete annihilation did not materialize, the situation of the Russian Church was drastically changed for the worse, coming precariously close to annihilation. 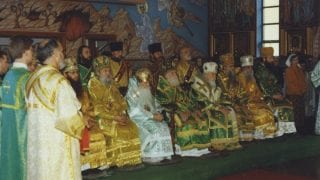 a noted iconographer, who assisted Archimandrite Kiprian paint the church here at the Monastery. The Cathedral parish of Saint Sergius is large and thriving, and the church a monument to the dedication of its parishioners.

While the celebrations, of course, were nowhere near the scale of the 500th anniversary in 1892 in Russia, it was exceptional in many ways for the Russian Orthodox Church Outside of Russia, and most especially in the Chicago-Midwest Diocese. The celebration consisted not only of church services, but also a Clergy Conference, and meeting of the Council of Bishops. The Clergy Conference being held with the participation of the Bishops. 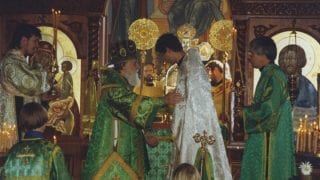 Ten members of the Council of Bishops present were: Metropolitan Vitaly (Ustinov), First Hierarch of the Russian Orthodox Church Outside of Russia; Archbishops Antony (Sinkevich) of Los Angeles and Southern California; Antony (Medvedev) of San Francisco and Western America; Laurus (Skurla) of Holy Trinity and Syracuse, and Alypy (Gamanovich) of Chicago and the Midwest; and Bishops Gregory (Grabbe) of Washington and Florida; Varnava (Prokofieff), Hilarion (Kapral) of Manhattan;  Kyril (Dmitriev) of Seattle; and Veniamin (Rusalenko) of Kuban. Clergy came from all over the US, and from afar. The Archimandrites Nicolae, then head of the Russian Ecclesiastical Mission in Jerusalem, and Alexy, who had opened the first Orthodox High School in Russia, were also in attendance.

The All-Night Vigil and Divine Liturgy were served with amazing beauty and compunction, and the Wonderworking Kursk Root Icon was present, as alaways, during special celebrations. After the Vigil, all present took the blessing of the assembled hierarchs. The Liturgy included the ordination of a priest, and afterwards, a procession around the church with all the hierarchs participating. The subdeacons who were vesting Metropolitan Vitaly before the Liturgy were both visibly shaken, neither having vested a Metropolitan previously. Metropolitan Vitaly told them kindly, “Don’t worry, they can’t start without me!” 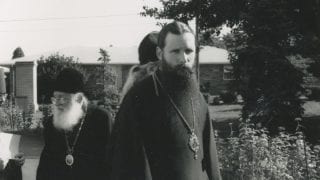 Several of the Hierarchs visited the other two parishes of the Russian Orthodox Church Outside of Russia located in Cleveland. The Church of the Mother of God, Joy of All Who Sorrow, which was in a residential neighborhood, in a house that had been converted into a church. The Church of the Holy Resurrection was an old church, in a somewhat rundwn business area, and had been built as a Romanian Orthodox Church, and was a remarkable and beautiful church. There was also an excursion to the Lake Erie shore, with Bishop Hilarion accompanying many of the clergy.

The Clergy Conference, with the Bishops in attendance. was very well organized; for the many clergy who could not speak Russian, earphones were furnished, with several priests providing simultaneous translations. There were speakers, and discussions between and the Bishops themselves, and the Bishops and clergy. Some events at the Conference seemed a preview of things to come …

It must be noted that this was an extremely controversial period in the history of the Russian Orthodox Church Outside of Russia, due to the fact that it had accepted parishes in Russia under its jurisdiction after the fall of communism. At the time of the celebrations for the 600th anniversary of the repose of Saint Sergius of Radonezh in 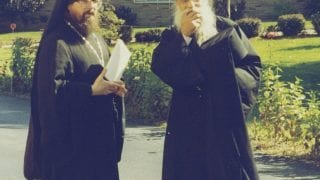 Cleveland, it had only been two years since the consecrations of Bishops Varnava (Prokofieff) and Lazarus (Zhurbenko) were revealed publicly-both had been consecrated secretly. Bishop Veniamin (Rusalenko) had only been consecrated only a year earlier. Much protest arose from the Moscow Patriarchate, and the other Orthodox Churches … The distressing eviction of monks of the Russian Orthodox Church Outside of Russia from the Skete of the Holy Prophet Elias, and their ejection from Mount Athos, were undoubtedly related to the controversy. The climate became tense, as well, here in the United States. Polemics between the Russian Orthodox Church Outside of Russia and the Orthodox Church in America became much more heated than was usual, and continued to do so througout the 1990s.

During a session of the Clergy Conference at the Saint Sergius Cathedral, there was much concern over how the Russian Orthodox Church Outside of Russia regarded the Moscow Patriarchate. Archbishop Antony (Sinkevich), the eldest of the Bishops, answering a question on that subject, stated that the Moscow Patriarchate was

“the church of the KGB,” and “without grace,” which was not th

e official position of the Russian Orthodox Church Outside of Russia. While this came as little surprise, as Vladika Antony’s opinions were rather well known, surprises were not absent.

While feelings inside the Russian Orthodox Church Outside of Russia concerning the acceptance of parishes in Russia were not unanimously positive, it seems most were not opposed. Little was known at that time of the situation in Russia by

the majority of the people of the Church, and it was generally thought that the Bishops and

clergy in Russia were workin

g in harmony as did all our Bishops outside of Russia. It was seen as a necessity to accept those who requested to be received into

the Russian Orthodox Church Outside of Russia.  An incident at the Clergy Conference brought a bit of clarification to the situation.

Bishop Varnava had been appointed as the Synod’s “man in Russia,” overseeing developments rather than ruling a particular diocese. At one point, Bishop Varnava and Bishop Veniamin both stood, and entered into

a verbal exchange, which became extremely heated; the clergy who were 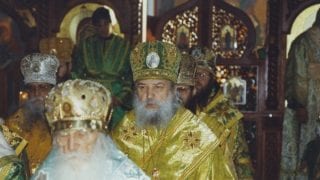 translating refused to continue during the exchange. One remarked, “I’m not going to translate this -it’s just Bishop’s stuff!” They were both finally asked to be seated. Metropolitan Vitaly was most obviously not amused. The next day, both Bishops apologized for their argument, and stated that Metropolitan Vitaly had made peace between them.

Russia, and became known as the Free Russian Orthodox Church. Contining disputes between the Bishops in Russia between themselves, as well as with the Synod of Bishops, culminat

ed in the creation of several competing and opposing groups inside of Russia, all of which refuse any contact with the Moscow Patriarchate.

In a relatively short time after the celebration of the 600th anniversary of the repose of Saint Sergius of Radonezh in 1992, the situation of the Russian Orthdox Church Outside of Russia underwent great change, as it entered into communion with the Moscow Patriarchate. As it always had stated that it would, when the Church in Russia was free of control by a government that worked to achieve an atheist utopia.  Some predicted this would mean the end of the Russian Orthodox Church Outside of Russia, that it would simply be absorbed, that the autonomous status would soon be withdrawn, and that dire consequences would result. This has not happened.