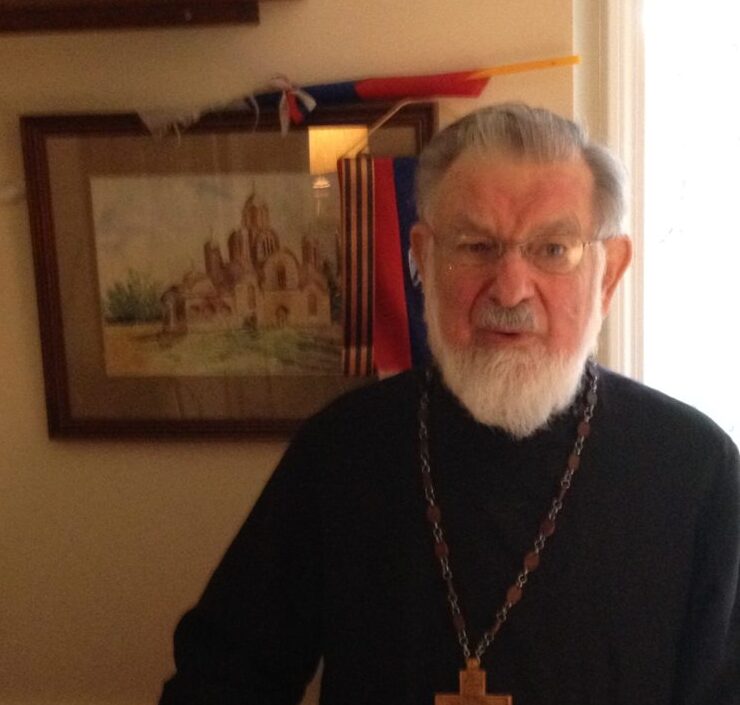 Archpriest Feodor Shevtsov was born in Serbia in 1929. He can truly be called a “karlovite” as from 1934 to 1937, he and his family lived in Sremski Karlovci. Today, Fr. Feodor is the only surviving altar server and parishioner of the ROCOR church in Sremski Karlovci. Another Metropolitan Anthony’s living acolyte is Lev Ivanovich Pavlinets (b. 1918). However he served with Metropolitan Antonii in Belgrade. Despite the fact that Fr. Feodor has previously been interviewed about Metropolitan Antonii (http://www.pravoslavie.ru/put/28256.htm), I asked him to share his recollections of the founder of the Russian Church Abroad.

Fr. Feodor: A few words about what I remember. I remember Metropolitan Antonii (Khrapovitskii) in Sremska Karlovci in the last two and a half to three years of his life. He loved Sremski Karlovci. It was his permanent place of residence in Yugoslavia. This was thanks to the Serbian Patriarchate. He was, of course, an outstanding and remarkable person and an outstanding hierarch of the Russian Church at the very end of the 19th and during the 20th centuries – both in Russia and abroad. Well, his life story is well known, especially through the writings of Nikon Rklitsky, who was close to him in Belgrade. Bishop Nikon (Nikolai Pavlovich, it seems) never lived in Sremski Karlovci, but Met. Antonii spent quite a lot of time in Belgrade, although he tried to be in Sremski Karlovci as much as possible.

We had a Russian church there, a very, very modest refugee church of the Nativity of the Most Holy Theotokos. This church was on the second or third floor. It was almost like a house church. It belonged to the Serbs, but they gave it to us (I mean, to the Russians) and Met. Antonii regularly served there with a deacon, Dmitry Ponomarev. But the closest person to Vladyka Antonii, whom I remember well, was Fr. Feodosii Melnik. They were both remarkable people. Well, Vladyka Antonii was a short, stocky kind of person. I remember, I served with him in that Karlovci church, approximately from mid-1934 through 1935 or ‘36. Vladika Antonii reposed on August 10th, 1936 but until his last days he was always in church, frequently served, and if he didn’t serve he absolutely attended while his cell attendant Fr. Feodosii served.

So, there were three of us altar servers. One, the most senior, who instructed us, was the future Archimandrite Antonii Grabbe, at that time Alyoshka Grabbe. So, I was friend with them and we served in the altar. This was wonderful. He very much wanted to teach our altar servers how to behave in the altar. I remember this well. Well you know what – no one could be in the altar or even enter the altar without vestments. Because of this Fr. Feodosii would say to us: “This is what an honor you have, you remember this, guys, you can be in the altar because you are in sticharia.” Even the warden – who at that time, by the way, was the future Bishop Gregory Grabbe, Yuri Pavlovich Grabbe, I also remember and knew him well – even he could not [enter]; he would only knock on the door, the side deacon’s door, would hand us the slips, or prosphora, or commemorations, and we would take them, whereas he could not enter the altar because he was not in a sticharion. This was remarkable, and of course, no talking in the altar was tolerated, this went without saying. This was simply told to us, and we saw this when we served for the first time: there was no talking and one had to simply respond to gestures. And the deacon, Dmitrii Ponomarev, regularly took charge, or Fr. Feodosii himself. And neither we or anyone in the altar spoke with Vladyka.

It would happen that Fr. Feodosii would drive us to the residence of Metropolitan Antonii, not very far away. He loved people in general and in particular he always treated us very well when we visited him. The residence was very modest, made of two rooms, one room was a kind of office and the second, it seems, was a bedroom and overall…It seems this is not very important, but overall it was remarkable how it always smelled of wax and incense there and a lampada was always burning. And there was a writing desk, it was like a study. And he asked us all…Fr. Feodosii drove us to him, and we the altar servers sat, and he asked us all about school. There, we studied in Serbian schools. By the way, I of course also studied in a Serbian school…

How old were you, Fr. Feodor?

In those days I was six years old. Six – five and a half to six or seven years old. I remember my first confession at seven years old with Fr. Feodosii. And then the first communion [after the child’s first confession? – ed.] from Metropolitan Antonii. He would always commune us himself. So, I remember – after confession was the first communion, and this was in early 1936, I was seven years old, and this significant remembrance was preserved in my memory. And in general, the whole setting, this temple of the Most Holy Theotokos, of the Nativity of the Most Holy Theotokos. It was wonderful, but, you know, it was so modest that now you would wring your hands, because it was just worse than modest – even poor, you might say.

So my mother, Vera Mitrofanovna Pavlovskaia, a Muscovite at her core, sang in this choir and my father attended the church as a parishioner. I served in the altar and that’s what I remember – the autmospher in the altar. It stayed with me my whole life, even to this day: how to behave in the altar, and the seeds were sowed then. This reverence towards the altar and how one must conduct oneself in the altar remained within me. So somehow, you know, there was no need for any grand lectures or teachings, but simply the whole situation and the whole atmosphere forced us altar servers to approach the services and the altar in a similar fashion.

I remember vividly how Vladyka  Antonii, when he served, that during the Eucharistic canon, at the time when “O Lord, Who didst send down Thy Most-Holy Spirit at the third hour upon Thine apostles: Take Him not from us, O Good One, but renew Him in us who pray unto Thee” – you know this place – and I look, and Vladyka Antony has tears. I ask Fr. Feodosii: “Why is Vladyka crying?” And he says, “He is not crying. When you grow up, Fedya, then you will understand. If you yourself will continue to serve and be in the altar, then you will understand all the better, all the more.” And so this remained a sharp memory for me for my whole life. You know, “Grant me tears of compunction”. Well, I saw such tears of compunction. I would say, perhaps, this is the only clergyman whom I saw with them – namely Metropolitan Antonii. This I remember well. Well, this too: We lived near the church, and Yuri Pavlovich Grabbe, his wife Varvara Maksimovna (as I recall), their son Alesha and daughter Nastya also lived there, though not together with us. I knew them all well. And we lived – there was this Peter Sergeevich Lopukhin, he had relatives, and now there are relatives here – so we lived with them, the Lopukhins. They rented a big house, and it was a good house. In general, Sremski Karlovci was a modest place, you know, but very pleasant. And if I went there now, I wouldn’t mind living there. I was there in 1998 and I walked around these places. Meanwhile, now in 1997 the  Serbian bishops received me as one of their own, and Vladyka Irinej [now patriarch] even offered: If you want to stay here, he says, just say the word and we’ll set you up here, you can work in the patriarchal administration in Novi Sad, or if you want, I’ll give you a village parish. He said, “I know who you are, where you are from.” So I told him about Sremski Karlovci. He remembered them, so he says “Well, very good.” The Serbs received me beautifully, I was simply amazed. To this day I remember the Serbian language, only it’s a little rusty.

Fr. Feodor, how was it with Vladyka Antonii – when you were with him at the table or when he received you? Did you have an awkward feeling or like he was an adult and so on? 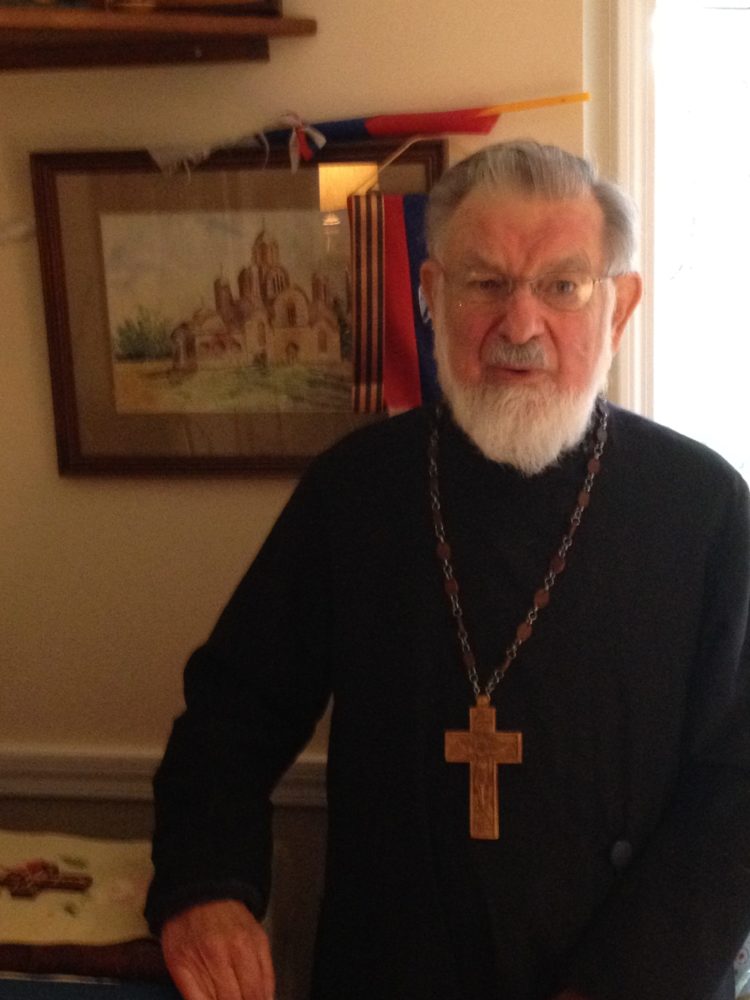