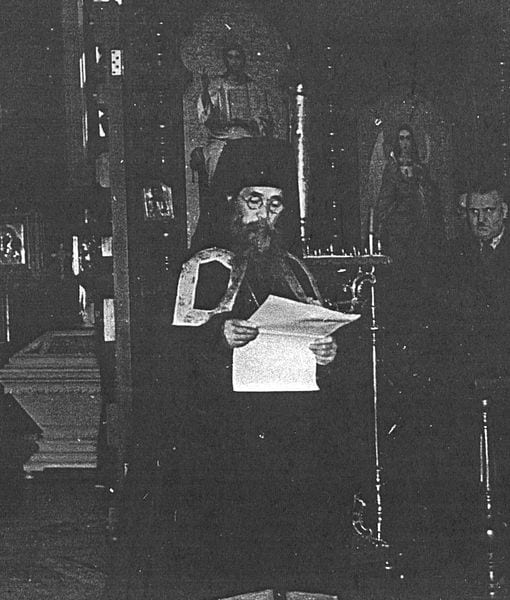 On 13/26 February 1941 the Synod of Bishops of the Russian Orthodox Church Abroad heard: The oral presentation of His All-Holiness the President of the Synod concerning the situation of the Orthodox Church in Japan. According to reports we have received from Japan, which reports have been confirmed by Metropolitan Sergius’s [Tikhomirov] extensive statements to the Tokyo correspondent of the newspaper Zaria, printed on the first of Januray of this year, the Metropolitan has resigned from the administration of the Japanese Church and from using the title “of Japan.” Metropolitan Sergius has also stated that he will, in his own time, transfer to the Japanese Orthodox Church all of the property both real and liquid, as he put it, “that has been collected by the Church’s Missionary Department, although of course it was collected for the use of the Japanese Orthodox Church, for which reason it was registered even in 1909 by Bishop Nikolai in the name of a Japanese citizen (Idzi Zaidan).”

After resigning from the direction of the Japanese Orthodox Church and declaring that he himself will become the head of the Orthodox Mission in Japan, in that capacity taking care for the Russians in Tokyo, Yokohama, Kobe and other Japanese cities, Metropolitan Sergius has temporarily appointed a graduate of a theological academy Arsenii Iakovlevich Ivasav to head the church, with the temporary title, “Substitute to Locum-Tenens” of the Orthodox Church of Japan. Metropolitan Sergius announced about his complete withdraw from the guidance of the Orthodox Church of Japan, and says that he hopes for the speedy election of a new bishop for said church, although he has not apparently taken any steps toward this end.

Considering that a young church remaining long without episcopal supervision, especially when completely cut off from the Mother Church, is threatened with upsets and even with complete disorder, the President of the Synod considered it his duty to address himself in a letter, dated 2/15 January, to the Substitute to Locum-Tenens of the Japanese Church A.Ia. Ivasav, declaring to him the danger of such a situation for the Church of Japan, as well as the necessity of taking all measures to quickly establish canonical order. The Synod received the following telegram in reply from Mr. Ivasav, dated February 25: “Thank you. Message received. Telegraph Metropolitan of Harbin [with] blessing to ordain Archpriest John Ono after monastic tonsure. His documents are in Harbin.”

In view of the serious danger to Orthodoxy presented by the Orthodox Church in Japan’s long abiding without episcopal supervision, on the one hand, and, on the other hand,  the fact that we are in a time of war which threatens  to interrupt all relations with the Far East, it seems that the ordination of a successor to Metropolian Sergius is extremely urgent. Therefore the President of the Synod suggests that we fulfill the request of Mr. Ivasav, himself being the person to whom the leadership and administration of the Church were granted by the previous head of the Church in Japan.

We resolved that: Metropolitan Sergius has rejected the government of the Orthodox Church in Japan which was entrusted to him, having abandoned her without any episcopal leadership or pastoral care, expressing only the hope that a Japanese person be chosen as the head of this Church. For a Church to continue long without a hierarch is abnormal and threatens the preservation and further establishment of Orthodoxy in Japan; it may lead to protestant tendencies or ecclesiastical anarchy. The interests of the Church therefore presently demand a quick resolution, such as would reestablish a lawful and canonical structure in the Orthodox Church in Japan. The urgency of the matter does not permit us to postpone the decision until such time as a regular Council is convened, nor to await the results of a written questionnaire of the All-Holy Members of the Synod, nor even to await the reception by the Hierarcha Synod of the documents concerning the canonical qualifications of the Japanese Archpriest John Ono as a candidate for the episcopacy. Rather, the inspection of these documents can be entrusted to Metropolitan Meletius of Harbin and Manchuria in his capacity as representative of the Hierarchal Synod in the Far East.

In light of all the above-stated conditions the Synod of Bishops determines: To charge His Holiness Metropolitan Meletius with the accomplishment of the ordination of Archpriest John Ono as Bishop of Japan, after the latter has received monastic tonsure, that is if there shall be found no canonical impediment to his ordination; also to suggest that all measures be taken to preserve canonical ties between the Church in Japan and the Mother Church, concerning which a decree and telegram are to be sent to Metropolitan Meletius; A.Ia. Ivasav and Archpriest John Ono are to be informed, as is the entire Russian Orthodox Church Abroad.