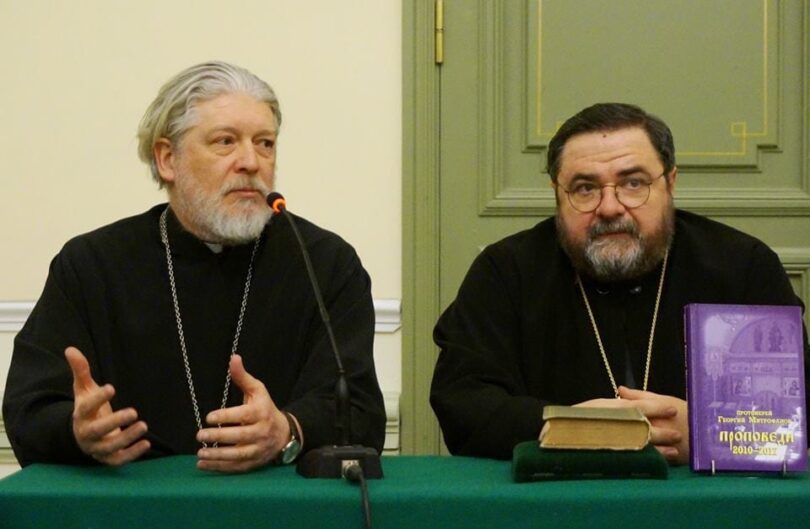 Fr George, on the right, on the day of the launch of the book of his sermons. Fr. Aleksei Uminskii on the left. Moscow, March 19, 2018. Photo: Dmitrii Avsineev

Father George is a scholar of 20th century Russian Church history and a professor at St. Petersburg Theological Academy. Fr. George is known for his call for the condemnation of the Communist past and for his sympathy for the White movement and General Vlasov’s Russian Liberation Army.

I recall that when the reunification happened in 2007, you expressed the paradoxical idea that we had united far too late and far too quickly. It feels as if nothing has changed since that moment, yet objectively years have passed. What can be said about these last seven years? What thoughts do you have on the Russian Orthodox Church Outside of Russia as part of the Russian Orthodox Church?

I can return to those words that you just reminded me of, and say that in general, unfortunately, I was correct. What I said back then – “too late and too quickly” – has since then been substantiated. I will now formulate a more detailed response to this.

What do I mean by “too late”? In 2007, there was talk about the existence of that Russian diaspora  – I mean this in terms not only of the church diaspora, but also the Russian diaspora as a social phenomenon, as a cultural phenomenon – which had retained the life and traditions of the Russian Empire that had collapsed in the 1917. Of course, by 2007 the Russian diaspora had in many ways distanced itself from being Russia in exile. But it would have been very important for all of us [in Russia], in a historical, religious, cultural and social context to unite with those who were able to retain these traditions better, in greater measure, than we were. The traditions were destroyed here; unfortunately, the traditions also gradually eroded in the Russian diaspora. Moreover, this is not to mention the people who replenished the  Russian diaspora, I would even say starting in the seventies and especially since the nineties, who also became part of the Church Abroad – these people, of course, to a greater degree enabled the erosion of the existing traditions, and were generally not interested in seeing themselves as stewards of the mission of the Russian emigration. However, among them was another part who did discuss these issues. And unfortunately, they were formed here, outside of that Russian reality which existed and of which they dreamed, when they internally opposed the soviet world. Just like the grandchildren, great-grandchildren and great-great-grandchildren of Russian emigrants, living there [outside of Russia], they offered themselves and others a specific dream about the Russia of the past. But idealism by definition is historically barren and religously tempting. That is,  essentially our belated unification resulted in both sides consisting of at best romantics and at worst, people simply reacting to circumstance. This, by the way, is quite justified. Let’s say, the Russian Orthodox Church outside Russia was going through a kind of internal crisis, an ideological conflict with new Russian immigrants with whom they needed to learn to communicate, to better understand them. On the other hand, there was an opposition [of ROCOR] to many autocephalous churches of the Orthodox world. And our reunification helped solve these problems. Reunion occured with the whole Orthodox world, and there was a better understanding of those that live here [in Russia] and what they live for. This may have been a pragmatic point, and certainly a positive one. Here I feel I should also recall something else I said back then to Fr. Nikolai Artemov: “the outsiders united with the outsiders”. To be an outsider is  not always a bad thing, because there have been times in history when it is precisely the outsiders that retain a sense of truth and a sense of reality. But the fact remains that the outsiders are often not in a position to influence the course of things.

Returning now to what I meant by “too fast”. We have not seen what we expected here [in Russia]: specifically, the experience of Russian church life from the 1920-30′s, which was founded upon the principles of the All-Russian Church Council of 1917-1918, and formed the foundation of the life of the ecclesial Russian diaspora, has regrettably not been transmitted to us. And the issue was not that the  messenger was not active or creative enough, but that we have not seen the return of Russians back here. And this fact was an alarming symptom, that living here continues to seem unacceptable for many Russians overseas.  Not because they want an easy lifestyle, from being used to the Western standards of life, which are still far superior to ours. Instead we are talking about something different. For them, our country remains a different Russia to the one they dreamed of. But it is also the case that unfortunately, in the process of our unification there were no changes to our church regulations, for example, which would have made our regulations more like yours. You retained a certain autonomy, the status quo, but without taking into account our need to bring your principles of church life into our church life. Not just the stories told by your clergy and laity, but those regulations and principles that were developed back then at the Council of 1917-18 and tested in your parishes but that failed to materialize for decades in our churches. This did not happen. And we most certainly overestimated your ability to influence our situation here, in particular in very specific questions. Say, for example the very painful question regarding the authenticity of the remains of the Royal Martyrs.