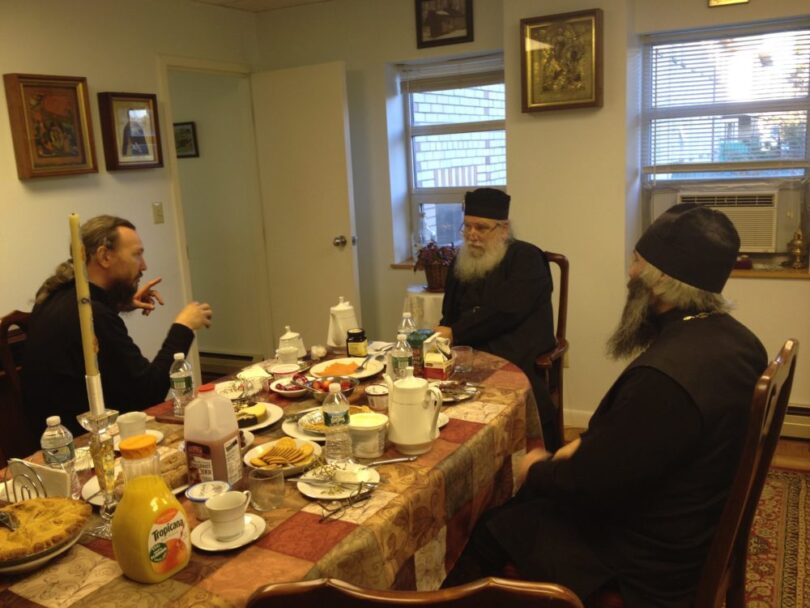 Father Pavel shares his impressions about the new phase in the life of the Russian Church Abroad.

Protopriest Paul Velikanov is rector of St. Paraskeva’s parish, a dependency of the Trinity-Sergius Lavra, and chief editor of the website Bogoslov.ru. In October of 2014 he presented the lecture “Ecclesiality and Ecclesialization” at Holy Trinity Seminary, calling forth much interest. The present interview with Fr. Paul was conducted during a session of the interconciliar assembly.

Fr. Paul, please tell us about your impressions from your encounter with the Russian Church Abroad.

Of course I’d like to talk about Holy Trinity Seminary, about the impressions that I received when I visited Jordanville, and in general about the sort of parish life which exists today among the Orthodox in America. Strange to say, I was pleased that a certain crisis is apparent which is common to the Russian Church in the Diaspora and in the Moscow Patriarchate. This crisis consists in the fact that the division, which hadn’t happened in the Church before, the division which led to the schism, while today from the external, formal perspective it has been overcome; nevertheless everyone understands that we don’t have exactly the same ecclesiastical tradition. Quite some time has gone by and, over the course of the years two different generations of people have grown up, with their own habits, their own standards of value, their own orientations; to simply unite them mechanically, while not impossible, is not entirely expedient either.

And so a question arises immediately: What then is role and mission of each of these churches? With regard to the Moscow Patriarchate, it’s more or less clear: She doesn’t need to devise anything new; she is proceeding according to a definite paradigm of permanent renewal, the revival of church life both in Russia and beyond her borders. While this movement may not be so effective, not so clearly expressed on the face of things, it is nevertheless stable, and each year it encompasses a yet greater circle. As regards the Church Abroad, on the other hand, I’ve gotten the impression that there exists a certain internal perplexity. This is because there is no clear purpose for the independent existence of a Russian Church founded as a bulwark of salvation from the communist authority. And the youth who are coming to the Orthodox Faith, for whom arises a choice between one curch and another, all the more since they are choosing not only between two branches of the Russian Church, but they are also choosing among other churches — Antiochian, Greek, Serbian, Romanian Churches, which can all be found in one …

… the American Church, the OCA — all of which can be found in one and the same city, naturally they must have some sort of basis for particularly choosing, for example, the ROCOR. And if certain things were dear to the first generation of emigrants and their children, yet such values are understandably changing somewhat today…  It’s rather like a musuem, where it’s interesting to come and look, but few would want to live so far away.

But this crisis is in fact very good and very beneficial.

Why? Because the nature of this crisis demands not that we introduce a superficial revision, but precisely a deep revision of certain fundamental thoughts and fundamental emphases which exist in the church. I’ve seen the willingness of the young teachers and students. I have seen that they recognize the moment of transition from one paradigm to another. They don’t yet understand to which paradigm they are moving, but they see that there is a certain intellectual pressure; there is a special, elevated level of subtlety that must unavoidably be obtained through some sort of thought, through some sort of substance. But no one knows yet of what sort.

In the same vein, one might say that in the ROCOR today there is an open window of possibility, particularly for creative re-thinking and, it could be, I’d like to say, even for a conservative transformation of life in the spirit of the ancient fathers, in the spirit of the first apostolic community, at the same time without rejecting all the rich and rightful inheritance which has existed in the Russian Church over all the centuries of her existence.

It occurs to me that it is very important in this vein that there be greater cooperation between the academic and research institutions of the Moscow Patriarchate and the Church Abroad. This is because it’s obvious that the Russian Church Abroad today lacks the academic resources necessary to understand, work over and make available to wide research circles that whole archive of the Russian emigration which she possesses. This includes not only materials ecclesiastical and theological in scope, but also everything associated with the life of the Russian emigration. On the other hand, of course, for our contemporaries, especially for the youth, access to what has for a long time been kept inaccessible — the life, the landmarks, and the values of the Russian emigration — will allow us to see a new and, I’d say, possibly even an inspiring and in some ways infectious … the infectious magnetism of pre-revolutionary Russianness.

Whatever has remained is hovering somewhere.

It seems to me that it is hovering and, therefore, must have been preserved, of course, in the form of those artefacts which, in particular, are subjects of interest for historians, for archivists, that is to say for all who are occupied with such things.

What sort of cooperation could there be Holy Trinity Seminary and the spiritual schools in Russia?

Right now the next wave of reforms in spiritual education is taking place in Russia. These reforms are obliging us to institute revisions in the very system of spiritual education. If all that I spoke of earlier should come to pass in the situation of the Russian Church Abroad, then it will become obvious that the role of academic institutions, chief among them the Jordanville seminary, must increase significantly here. For where, besides here, must we think through and work out the answers to all the challenges that contemporary society poses to Christian faith, which are becoming more pointed every year? Here as well there can be a very gracious and fruitful cooperation between the academic institutions of the Moscow Patriarchate and the Jordanville Seminary.

Why? Because those processes which in America have long become, in a certain way, a matter of course, are only beginning in Russia and neighboring countries. This allows us not simply to work out some conciliar position, but also to be enriched by the experience which our brothers already have. I don’t mean only the Orthodox, but also perhaps the Catholics and Protestants, insofar as in the face of these global challenges the difference between confessions will become less and less significant.

It seems to me here that there could be some mutual activities, conferences, seminars, perhaps not necessarily in real meetings; these could be some kind of webinars, such as would allow Russian people, on the one hand, to understand those realities of the lives of the Orthodox in America, without their being attenuated with those problems under which our contemporaries now live.

That’s on the one hand. On the other hand, there are other interesting directions we might take, for example, even in the contemporary sciences, which might become a good bridge between religion as such and the contemporary unbelieving, secularized man. Most of all I mean the field of psychology, that field which is called neuropsychology.  This is the study of the highest activity of the brain, the highest activity of the nerves. Here are all the questions that constitute the field of interdisciplinary investigation. This field touches on philosophy as such, on theology and on the exact sciences. If we are talking about questions of the origin of faith, the origin of man, the theory of evolution, creationism and so forth… In fact, there are many such questions now, and each year the intensity of the demand on the church for an answer — most of all for an intelligent, world-view oriented, profound answer — becomes more and more acute. Here again it seems to me that role of the spiritual academies must increase substantially.