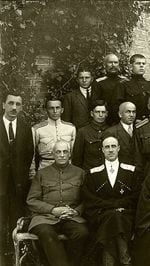 In 1921, when I was living in Constantinople, I was once walking down a busy street in the company of a cossack standard-bearer.  Suddenly, he stood to attention, saluted and remained as still as a statue.  I turned round and saw in the midst of other pedestrians, a cossack walking on the other side of the road.

‘What’s the matter?’ I enquired

‘That’s a lieutenant-colonel walking past over there, and he’s got the regimental standard hidden beneath his tunic – right on his belly’ (That was how the standard-bearer put it).  ‘Whenever he leaves his flat, he always takes the standard with him, just in case it goes missing – much safer just to bring it along.’

‘That’s original’, I said and then added, ‘Good for you, standard-bearer, but this kind of behaviour attracts attention from the people on the street, since hardly anyone knows about this business.’

In 1946, in a provincial town in West Germany I came across an archpriest I knew.  He was dressed in a plain grey suit and for all the world, looked like a typical German professor from the good old days.  In a cafe where we had gone to for our lunch, I couldn’t help noticing that the Germans kept staring at the priest.  I later discovered – something which had escaped my notice before – that the priest had a gold pectoral cross beneath his jacket complete with a massive gold chain.  The cross was tucked into the top pocket of his waistcoat [American=vest]

‘Fr George, you should hide that away.  And anyway ‑  I am sorry ‑  but you are in civil dress, so why even wear a cross and attract all this attention?’

‘You know, I am a bit fearful about leaving it at home, in case it goes astray’, said the archpriest with some embarrassment ‘So I always carry it with me.

With these words, he began to button up his jacket again;  it was summer and very hot.

In 1921, there were about a thousand of us political refugees in Thessalonica (Greece) –mostly military personnel with their families.  There were some twenty-three generals from the officer corps, the most senior of whom was His Excellency Prince A. Baryatinsky.  The prince was the president of the domestic bursary committee whose attention was drawn to the fact that the prince always used the same handkerchief – a red one with white polka dots.

The committee decided that for his nameday, they would present him with a dozen new handkerchiefs. As it happens, there was a committee meeting on the eve of the feast, and the prince was solemnly presented with a beribboned package.  The prince was very touched by this attention and conveyed his thanks.  However, it was later revealed that he continued to use his old handkerchief.  Moreover, whenever a member of the committee had a reason to visit him, the prince would inevitably produce a small, carefully wrapped parcel tied up with string.

The same colonel would unwrap the parcel on his way home and discover a white handkerchief within.

In this manner, the prince disposed of the whole dozen of the gifted handkerchiefs and continued to use his eternal polka dot one    Curious, but original!

I met Peter Nikolayevich Veridarsky in 1922 at the officers’ residence in Belgrade in Yugoslavia.  His appearance was striking.  He was a handsome man of thirty-two, with brown hair, thoughtful hazel eyes and a full beard which he would stroke nervously at regular intervals as if to check that it was still securely attached to his face. A mining engineer by training, he was also a lieutenant in the White Volunteer Army, but for some reason was dressed in a private’s greatcoat, an Astrakhan hat and enormously heavy English boots.  It was winter and every day we took a walk after lunch.  On one of these walks,  I noticed that Peter Nikolayevich periodically stumbled, whereupon he would come to a halt, his face bearing a grimace of some hidden pain.

‘Anything the matter, Peter Nikolayevich?’

‘But I can see it on your face – you are in pain.  Are you perhaps unwell?’

‘No, no, I am quite well.  As to this matter that’s attracted your attention,  I will tell you about it some other time.’

We frequently did not bother to talk at all, and took our walks in silence.

‘What are you thinking about right now?’, Peter Nikolayevich asked suddenly.

‘Nothing in particular, really, yet, at the same time, everything pertaining to our inhabited world. When I see the snow drifts, and squint at the twilight and the lamps being lit here and there, I can’t help but fix my mind’s eye on our forsaken Russia.  It’s winter over there too, and the winter in this foreign Belgrade so reminds me of our winters back home…’

Peter Nikolayevich made a sudden stop again and – so I thought – uttered a barely perceptible groan.

‘Are in pain again?’ I asked

‘It’s nothing’, he replied with a smile, linking arms with me. ‘I will tell what the matter is.’

We made our way silently along King Milun Street in the direction of Kalemegdan Park.   It grew progressively darker, the street lights came on, and Belgrade looked very similar to a medium-sized Central Russian town somewhere.  The gently falling snowflakes tickled my face pleasantly.

‘I assume, you believe in God?’ Peter Nikolayevich addressed me.

‘All right.  But how frequently do you think of Him, how often to you actually remember God?’

‘It’s difficult to say;  it depends so much on our frame of mind and mood, because usually the time for prayer, for turning our attention to the Lord is when we are downcast, isn’t that so?’

‘I didn’t ask you whether you usually pray at home or in church.  What I wanted to know is how often do you think about God?’

‘It’s hard to answer that one!  Our thoughts are rooted so much in worldly matters, vanita vanities (vanity of vanities) that I suppose I’d have to admit that one often forgets about God.’

‘Exactly so, one forgets.   Now, I am going to answer your question about my health.  Once upon a time, a nail in the heel of my right boot had become dislodged, and from time to time would graze my heel.  I ignored this, but nevertheless noticed the following – each time an awkward step caused me even the slightest pain, I immediately remembered God.  When I realised this, I put away any thought of getting a cobbler to pull the nail out.  Eventually, the nail protruded so far that a small wound appeared on my heel ‑  it’s healed up now.   But even these days, whenever I put my foot down awkwardly, the nail, pressing down on the indentation in my heel, still causes me slight discomfort.  That’s when I instantly remember God!    You see, it’s precisely because our lives are all vanity of vanities and our minds are weighed down with earthly things that we forget about God.  And yet, we must remember Him always!  We need not simply to pray more, but actually to remember God more frequently than we do.  Then, I think, the satanic beguilement that’s all around us would lose much of its potency.   Because the Lord is always in the midst of us, but because we forget about Him, the devil is able to entangle us in his nets.  You probably think this method of mine which was revealed to me by quite chance is ridiculous, but it’s of utmost importance to me!

‘That’s original’ I thought. ‘But also quite edifying!’