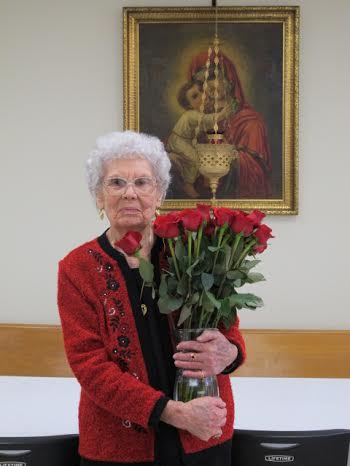 Early this morning I received the news that Nadezhda Feodorovna Petrova (in English their surname is spelled “Petrovs” even though they did not actually live in Latvia, but this spelling was the one fixed by U.S. immigration officials and was never changed), who for many years was the starosta at Holy Trinity parish in Milwaukee, WI, had reposed in the Lord.

In 1991 I was reassigned from Chicago to Milwaukee to fill a vacancy in that parish, and at the same time, the starosta there, Oleg D. Lunk (another “Americanized” surname, originally Lutchenkov) retired to Atlanta where his daughter lived. Nadezhda Feodorovna took over “temprarily” as starosta, but being a very friendly and sociable person, was popular and continued for many years.

Nadezhda Feodorovna never missed church services. She was almost always the first person there and the last to leave: in particular, on Pascha, when we were in church most of the night, Nadezhda Feodorovna would stay after the others to clean up following the nighttime breaking of the fast, and then, since a new crowd would always come a short time later on Easter Sunday morning for a second Resurrection Matins, she would return for that after perhaps an hour or so of rest.

One year at Easter, we were finally finishing up, as we thought, about noon, when a young man (a new arrival from Russia) arrived with his friends and his fiancee, and asked if he could be baptized (then and there). Many clergy would have put him off, saying things like “You must first show some stability”, “You must study these books”, or even (not so much in ROCOR, though) “You have to pay a year’s membership dues and then we’ll talk about baptism”.

That is not my conviction, personally, as my own approach is to avoid discouraging people, and in this case he came from a Russian Orthodox background and saw that as his religious tradition, which does give a certain stability: he knew much of what the Church teaches. So I told him “If you carry the pails of water for us (he was quite fit), then you can be baptized, since today is Pascha”.

He did, and later became quite a committed church member, But without Nadezhda Feodorova who also stayed, well into the afternoon that day, after going all Holy Week and all night, and then made friends with the family and maintained contact with them, the ties might not have been anywhere near as good.

When at this present post-Epiphany season I used to make house blessing visits, it was mostly Nadezhda Feodorovan who set them up for me. She was in touch with everyone, almost, who went to our church, and she would say “On Monday, Mrs. So-and-So would like you to come by with the Holy Water, and I’m invited too; on Tuesday, it’s the family who live by the lake, and after that…”

One of Pope Benedict’s nephews married a Russian girl at out parish (with the promise to raise any offspring in the Orthodox faith), and in the aftermath of the wedding, I believe after 40 days, Nadezhda Feodorovna and I were treated to dinner in the most elegant and expensive restaurant in Milwaukee. Years later, I met the Papal Nuncio at a diplomatic reception in New York, and he told me, “Oh, Yes, we know all about that in Rome: His Holiness was OK with it that you did the wedding…”

So over the years, we shared many memorable times at our parish, and she played a great part in them all.

Few priests could ask for a more helpful starosta. God rest Nadezhda Feodorovna: she was 93, after a long life filled with adventures, love and friends.