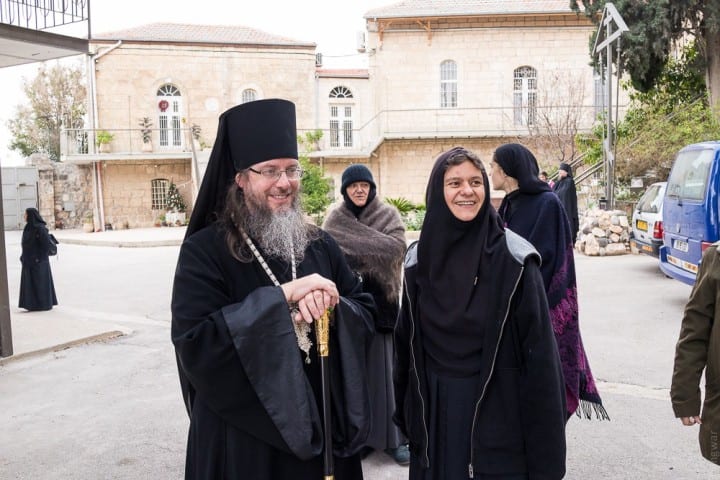 Yes, the Intifada. Many of the nuns in the Mount of Olives convent are Arabs. Once during the Intifada, at the beginning of the 2000s they heard their home towns and villages being bombed. You can imagine how they felt, having relatives there. They were understandably distraught. There are also frequent clashes near the Mount of Olives convent, you cam go outside and smell tear gas, hear gunfire. This is not all over the place, just in several locations. In the 1960s and 1970s, even in the 1980s, the Russian Orthodox diaspora was aware of the existence of our monastic communities in the Holy Land, and sent financial donations. However, we did not seem to be able to keep up the impetus of this..

In November 2015 the Holy Trinity Monastery in Jordanville was visited by Archimandrite Roman (Krassovsky), head of the Russian Ecclesiastical Mission of the Russian Orthtodox Church Outside Russia in the Holy Land. Archimandrite Roman kindly agreed to answer the questions of the editorial office of this Web site. The Palm Sunday (April 24) is the day when collections for REM have been conducted throughout the Russian Church Abroad. Please support the Russian Ecclesiastical Mission in Jerusalem via Fund for Assistance to the Russian Church Abroad.

Thank you, Father Roman, for finding the time to talk to us. I would like to speak about the most special places we have in our Russian Orthodox Church Outside Russia – our holy places, the convents and monasteries in which you have served as head of the Russian Ecclesistical Mission in Jerusalem for three years now. It would seem that we should all know these places, but do you receive sufficient support and attention from Russian living abroad, that you are remembered? That is my question.

First of all – yes. The Mission has existed since the mid-19th century, and was affirmed as a mission in 1858. The Mission was founded for a number of reasons, primarily to assist Russian pilgrims who had nowhere to stay and where to pray in the holy places. Even then, pilgrims came in their many thousands.  Secondly, it helped Orthodox Palestinians. The Mission, the Russian government, the Consul and others opened schools for Orthodox Arabs. At one time, the Mission maintained around 200 schools in Palestine. The Mission flourished especially through the efforts of Archimandrite Antonin (Kapustin) in the Holy Land and acquired a great number of properties and land, mainly engaged in building monasteries and convents, such as the convent of the Mount of Olives, the Gornyi convent and St. Khariton monastery. There were also old people’s homes, hospitals and suchlike. This was an enormous undertaking carried out by the Imperial Orthodox Palestine Society.

Unfortunately, the First World War put an end to contacts with Russia. Not only direct contacts, but financial support. The mission was cut off completely from contact with the Russian Church. After the war and the Russian revolution, when the Russian Orthodox Church Outside Russia was formed, the Mission appealed to metropolitan Anthony (Khrapovitsky) to take the Mission under his omophorion. This was done. The Mission remained under the aegis of the Russian Orthodox Church Outside Russia from the 1920s until 1948. Sadly, after that the Mission was split up for political reasons. That is, when Israel proclaimed its independence, its own sovereign state, and all the lands of the Russian Mission and the Imperial Orthodox Palestine Society were confiscated and transferred to the Soviet government, which in turn handed them over to the Moscow Patriarchate. All we had left were properties in Jordan, the Gethsemane convent, the Mount of Olives convent, Bethany and a few others, such as the Excavations and the church of St. Alexander Nevsky.

As there was no contact with Russia, there was no financial assistance because post-war Russian refugees who had fled the Bolsheviks and scattered all over the world were themselves living in dire poverty. Regular pilgrimages resumed only in the early 1950s through the energetic efforts of Bishop Methodius in France. In the 1960s pilgrimages were encouraged by the future Metropolitan Laurus, who visited the holy places for the first time as a priest-monk. Generally speaking, the 1960s-1970s saw the arrival of pilgrims from around the world, some 5 – 6 groups every year at the most. For the Russian Orthodox spiritual communities in the Holy Land this was a great joy. Now, after the fall of the Iron Curtain and the opportunity for Russians to travel to Israel…

Yes, visa-free. We see groups of pilgrims from Russia literally every day. At least 5 or 6, if not more. This provides some financial support from donations. We can now carry out necessary repairs, restoration work, redecoration and so on. Over the past 2 years we have restored the bell tower at the Mount of Olives convent at a cost of around 500,000 Euro. This was a massive undertaking.

As far as I know, this bell tower suffered damage back in the 1920s?

Yes, there was an earthquake that demolished half of Jerusalem. Then there were the wars of 1948, 1967…

What was the effect?

The effect was considerable. The there was damage from artillery fire, and in 1948 two nuns were killed on the territory of the Mount of Olives convents, as were several monks in the Holy Trinity Cathedral. War is a very tangible thing! During all these difficult years the nuns had to go down into the city to find work: they did laundry as well as hard physical labor building pavements and roads. This went on for a very long time.

I see. But now, Father Roman, I live here in Jordanville, and …well, we have a traditional collection for the Holy Land a week before Easter, there is an office at the Synod that sends out appeals reminding people of the needs of our sites in the Holy Land. However, what more could be done to remind people of the existence of our monastic communities?  When I visited them, I gained the impression that the religious commitment there is much deeper than in other places. I saw, I felt that this was the spiritual front line of the Russian Orthodox Church outside Russia. How can we get more support from the Russian Orthodox diaspora?

The sisters in the Mount of Olives and Gethsemane convents are having a very hard time. They live in the midst of constant political tension when conflicts flare up between the Arabs and the Israelis, or ongoing unrest, as it is now…

You mean the Intifada?

Yes, the Intifada. Many of the nuns in the Mount of Olives convent are Arabs. Once during the Intifada, at the beginning of the 2000s they heard their home towns and villages being bombed. You can imagine how they felt, having relatives there. They were understandably distraught. There are also frequent clashes near the Mount of Olives convent, you cam go outside and smell tear gas, hear gunfire. This is not all over the place, just in several locations. In the 1960s and 1970s, even in the 1980s, the Russian Orthodox diaspora was aware of the existence of our monastic communities in the Holy Land, and sent financial donations. However, we did not seem to be able to keep up the impetus of this…

What could be termed PR in the secular world?

Yes, you could call it that. Public relations, dissemination of information…All this must be re-established, especially as many of the people who are coming to the Church in Russia these days know nothing about all this: that there is a place in the Holy Land to welcome pilgrims. Nobody offers this but us – not the Serbs or the Bulgarians – just us.

In fact, this is a continuation of the old tradition you mentioned earlier.

Yes, a place to which a Russian Orthodox pilgrim can come and feel that he is in his own church, hearing the same services he would hear at home. This fact should be disseminated as widely as possible, so that people will know and come as single pilgrims or in groups. It is something that parish priests could propagate and arrange. For various reasons there are those who come on pilgrimage regularly once every one or two years. There are some priests and archbishops who devote their time and efforts toward this holy work, and thank God for them. Bur a great deal more could and should be done.

Thank you very much, Father Roman, for speaking with us.