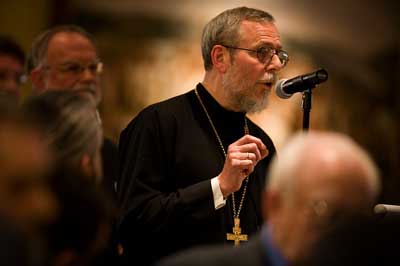 Fr. Pimen delivers his talk. Photo of the official photographer of the council

My reason for requesting the opportunity to address this conference is because I have constantly noted the ironic parallel between the attempt to accomplish reconciliation between ROCOR and the MP and the attempts to reconcile Old Believers to, how shall I say, “Niconians”. Every argument I have heard sounds the same as the diatribes between Old Believers and New Ritualists that have gone on now for several centuries. First of all, the charges — depending on what side you find yourself:

4. We have retained purity and truth.          4. You have become pharisaical in your exalted opinion of yourselves.

I could go on, but I’m sure that you get the point. As an Old Believer “nastavnik” struggling to educate my flock as to the legitimacy of the Russian Orthodox Church, I came to realize that one of the most formidable tasks I faced was speaking to the vituperative and extreme language used to justify the Old Believer position. Old Believer polemicists had labeled the “Niconians” as heretics, betrayers of the Faith, persecutors and even as ministers of the Antichrist—if Nicon was not the Antichrist himself. Constantly the question arose: would joining the ROC be a betrayal of our forefathers who died voluntarily or involuntarily for the preservation of the “True Faith”? And if we are honest, it must be admitted that many of the reforms of Patriarch Nicon and the later westernized practices of the ROC were unnecessary and ill advised. Thus, Old Believers had some justification in feeling reticent to recognize the legitimacy of the ROC. And to this day no Old Believer can

join himself to the ROC unless he can conclude that Stoglav, an all-Russian Council, had exceeded its authority in certain areas.

And so here we are again. Did Metropolitan Sergius lead the Church in Russia to be heretical? Is there even a legal Patriarchate in Russia? What does the MP want from us? Do they want to annihilate us? Are we betraying our forefathers? Has the MP repented? I have been struggling now for over 20 years to convince other Old Believers to follow our path when we united ourselves to the “Niconian” Church. Recently I spent several months talking to two young Old Believers from Oregon who had decided that they and their families could no longer live without priesthood. They agreed that there might very well be legitimacy in the Niconian priesthood and that they would join us as soon as the ROCOR faithful, who seemed to have returned to true Orthodoxy, would begin praying with the two-fingered sign of the Cross. I looked at them incredulously and advised them that they shouldn’t hold their breaths. Always one more reason to justify the division!

Vladika Daniel told me over 20 years ago that the problem with most Old Believers is that each step the ROC took to answer the Old Believers’ justification for not uniting would be met with another requirement demanded before any union could occur. And now? We make requests (or demands). Collaboration between state and church must end. The MP 2000 Sobor seems to answer. New Martyrs and Royal Martyrs must be glorified. Repentance must be sought. But the reality is that no matter what is done, the faithful who grew up listening to all of the insults hurled at the MP are never going to be satisfied—even as most Old Believers won’t end their division with the New Ritualists—no matter what steps are taken.

And finally, as I wrote in my open letter, please admit that the collaboration and submission of the Church to Peter I’s order to forbid the election of a Patriarch and to place a state procurator over the Synod of bishops is not far removed from the submission of the 20th century. Or consider the Church’s submission and collaboration with “Orthodox” Catherine the Great. Do you really believe the claims that this is all so different because the Church was united and servile to “Orthodox” rulers rather than to avowed atheists? Of course there is a difference, but as an Old Believer who has no connection with the need to claim the legitimacy of 18th and 19th century collaboration with the state, while calling the collaboration of the 20th century unmitigated sin, I must personally stand before you and ask forgiveness as I suggest that there is a significant degree of hypocrisy in such a claim.

My good friend and the translator for most of our Old Rite publications, Fr. Herman Ciuba, has stated to me on a number of occasions that there are so many critical issues facing the Church and the faithful today, that to constantly argue over what Metropolitan Sergius did in 1927 ought to be put in the past, even as the persecutions against the Old Believers must be put into the past for God’s judgment. I agree. In the 1970s after you courageously lifted the anathemas against the Old Rite and against Old Believers, I came into contact with then Hieromonk Hilarion, Hieromonk Ioanniki and Fr. Theodore Jurewicz. They showed me love and Orthodoxy. I stopped worrying about who did what to whom in the 17th century. They loved; I had to forgive, and they forgave me. Of course, I had to investigate carefully whether there was heresy in the ROC. And you had to decide if the Old Believers had become heretics. I found none; you could find none.

Do we really believe that millions of Orthodox Christians in Russia are not partaking of the Body and Blood of our Lord in the Liturgy? If they are, must there not be a time to forgive and reconcile? We did, Old Believers and Niconians—who would have thought it possible? Will you act in the same manner that you criticized us Old Believers for so long as being stubborn, bull-headed people who would not listen to logic.

When we came to priesthood, we had dissenters. Some left us. Some have condemned me in public places. Some have spat at my wife in public places. Some claimed that I had been given a gift of a red Cadillac as payment for my betrayal of the pure Old Believer faith. And if you make peace with the faithful under the authority of the Moscow Patriarchate, there will be dissent, rumors and even some division, I fear. But if this is what is right, then at some time we must have the courage to do what is right. If it is the will of God, we will be safe and saved. I have experienced the pain and suffering of division. I encourage those who would cause raskol to trust that the grace of the Holy Spirit will guide our bishops to rightly divide the word of truth. And, as I indicated in my open letter after Vladika Daniel’s interviews, my parish and I will remain faithful to the bishops of ROCOR to whom we united ourselves in 1983.

The Russian Orthodox Church Outside of Russia,
http://www.russianorthodoxchurch.ws/synod/eng2006/5ensoborday3.html