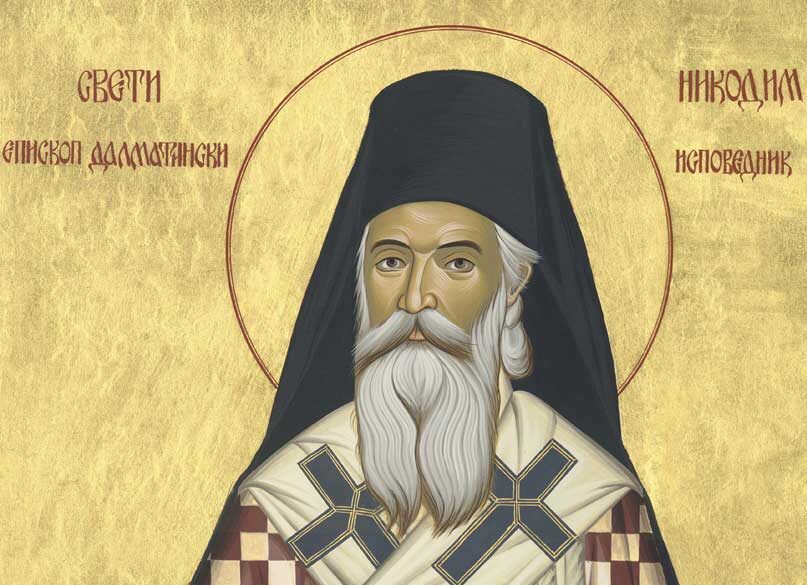 St. Nikodim of Dalmatia (d. 1915), whose canonical exegesis hasn't been translated into English yet

This article, originally written for the theological website of the Russian Church Bogoslov.ru, explains difficulties of theaching canon law in the Jordanville seminary.

Is it Canonical to…

I have recently had occasion to address one of the dynamically growing parishes of the Russian Orthodox Church Outside Russia regarding the canonicity of rules in the Orthodox Church. It must be said that at present it is very hard to find a parish in the Russian Orthodox Church Outside Russia without Russians who have emigrated in the past 10-15 years. The demography of such a parish differs markedly from customary norms. They have very few members  who are representatives or descendants of the post-revolutionary or post-war waves of emigres. My address concerned certain thoughts from the introductory course of lectures on church law regarding which church rules do not impose any prohibitions as such, but are invoked by legitimate church power, which employs canons as a means of spiritual healing and thus serves the salvation of the soul.

The questions put to me after my address, such as: Is it “canonical” to be inside the church without a headscarf, or what is the canonical rule for crossing oneself –reflected the parishioner’s conception of “canonicity.”

From personal experience I can say that such an approach is perfectly normal for people who have come to the Church in maturity; therefore it is logical that church law is studied in the final course in seminaries, when it is obvious to the students that an Orthodox approach presumes the consideration of a given problem in context.

A Creative Approach is Essential

An adequate comprehension of the “intentions of the lawmakers” of church rules and their proper application requires knowledge of the Holy Scripture, Church and Byzantine history, moral and pastoral theology. Naturally, the main purpose of seminary is to prepare parish priests, not specialists in canon law.  However, pastoral service calls for an understanding that in work touching upon canons, there must be an interdisciplinary approach. The experience acquired by students prior to studying this subject enables conducting the lessons in a sufficiently freestyle regime.

For me, the main point of reference in this matter is the approach of Protopresbyter Thomas Hopko, whose lectures at the St Vladimir Theological Academy were based on team work, and who strove, together with the students, to determine what is the Orthodox position on any question, while avoiding the assumption that the lecturer is endowed with some kind of presumption of infallibility even when speaking ex cathedra.

It is my view that that the main importance in the purpose of these and other subjects is not to load the students with a mass of information they may have recourse to in any circumstances, but help them to reach an independent understanding of an Orthodox view of the world, to give them experience of a correct positioning of questions and seeking answers to them. The fact that it is impossible to activate the prescriptions of canon law without a personal creative approach ensues from the circumstance that the content of many rules is not self-evident and requires reference to various auxiliary aids; I should note that the last Ecumenical Council of significance for the Orthodox  which attempted to regularize the canonical corpus of the Universal Church took place in the VII century.

From the very beginning of the course we find ourselves in the difficult position (books do not contain answers to all questions) when it emerges that even authoritative interpreters are frequently unable to explain how certain excesses of church life can be reconciled with the “theoretical part.” One can only reiterate that in order to avoid complex situations, the priest must approach his archbishop on all disputable matters, and the quality of one decision or another may be amenable to resolution only in the future, maybe in a future century.

The question why certain church rules are not observed in everyday life brings us right up to the broad subject of church oikonomia , the principles of which in the sphere of spiritual counselling are set out in the 102nd rule of the Council in Trullo (indicating that an imposed penance must be commensurate with the spiritual state of the penitent).

A preliminary study of church history helps students to examine the issue of oikonomia in the broader context of church creativity. For instance, in discussions concerning historical events in the recent period of the Russian Church lies the question of the limits of oikonomia (“house building”) in anomalous conditions of life, be it under a totalitarian regime or in the diaspora.

Can a Cleric be a Mathematician?

As the Holy Writ is a constant presence in the life of a Christian, the same cannot be said of canon laws that comprise an integral part of the Holy Heritage of the Orthodox Church. Therefore, one of the main tasks of the first semester is to enable students to develop a clear understanding of the content of the Book of Rules, where to find the rules regarding one or another theme.

The canons constitute the foundation for mastering the materials of the course, and their study is accompanied by interpretation, which allows the students a direct approach to the problems of our subject. In the course of studying the question regarding demands faced by the clergy, the students discover that the Greek words mathematikous in the 36 rules of the Council of Laodicea, Pedalion in English translation, reflect as “mathematicians”, while the Book of Rules defines it more clearly as “astrologers.”

A good example of canonical exegesis allows the students of the aforesaid Council, which set itself the task of regularizing the canonical heritage of the Orthodox Church at the end of the VII century – the Council of Trullo, the 16th rule of which  looks at the evolution of the institute of the diaconate, studies the problem in both  historical and sacramental dimensions.

Our Russian Orthodox Church Outside Russia in North America

Without an introduction to Orthodox canon law in the first semester, it would be impossible in the second to turn to the subsections linked specifically to the Holy Trinity Seminary.

Most of the parishes of the Russian Orthodox Church Outside Russia are located on the North American continent, therefore it is not surprising that questions regarding it are based mainly on the experience of those parishes, established in the 1920s by representatives of the post-revolutionary emigration. The experience of the diocese existing from pre-revolutionary times, with its missionary purpose and multicultural, multinational composition, differed radically from the experience brought by the clergy and parishioners from their Great and Small Russian dioceses. Suffice it to say that the Russian Orthodox clergy abroad received the permission of the Holy Synod to cut their hair short and wear frock coats when not serving in church.

Yet nowadays, decades later, traditions of the Russian Orthodox Church in tsarist Russia such as the wearing of long cassocks and long hair in North America have value, especially for those coming to Orthodoxy in mature age, seeking a home within an authentic, generally accepted contribution of the Russian Orthodox Church Outside Russia in Orthodoxy on the North American continent.

An important specific feature of the ROCOR lies in that having constitutionally guaranteed freedom of speech within the American pluralistic society, it could expose apostasy in its various manifestations – ecumenism, modernism, and servility – through the efforts of its spiritual writers, such as archbishop Averky (Taushev) or archimandrite Konstantin (Zaitsev).

The ROCOR has never seen itself as independent, but rather a temporarily independent entity, apart from the section of the Russian Orthodox Church that was under political duress. This act of ring-fencing from political pressure was a significant factor in the relations of  ROCOR with other Local Churches. Relative isolation caused an absence of dialogue, to the direction of orthodox ecclesiology represented by such theologians as proto-presbyter Nikolai Afanasiev and Metropolitan John (Zizioulas) which did not find a timely response in the ROCOR.

Nonetheless, the situation is changing: speaking at the IV Council of the ROCOR in May 2006, the respected Archpriest Fr Victor Potapov stated that “the perception of the problems of an Orthodox parish in our time rests, among other things, on then works of Metropolitan Anthony (Bloom) and  Protopresbyters Nikolai Afanasiev and Alexander Schmemman.”

The aforesaid is also applicable to the position of the ROCOR regarding non-orthodox Christians. The basis of this position is the theology of the New Holy Martyr Archbishop Hilarion (Troitsky) of Vereisk, expressed in his work “Christianity or the Church.” In a practical sense, in 1971  ROCOR adopted the practice approved by the Council of the Constantinople Patriarchate in 1755, requiring the christening of all the non-Orthodox wishing to be received into the Orthodox Church. The question of the limits of oikonomia arises again, in this instance regarding reception into the Church.

The Great metropolitan Anthony (Khrapovitsky) of the ROCOR frequently reminded his students that the canons are a living, not inert material. The importance of conveying this concept to the minds of the laity today is clear from the questions I faced in the discussion that took place in the parish on the role of canonical rules. In order to change the situation, it is essential that the study of canon law should inspire students to devote themselves to the not particularly popular, but much-needed sphere of theology – church law, to become serious theologians, and even better – serious clerics.

Translated from Russian by Alena Kozhevnikov