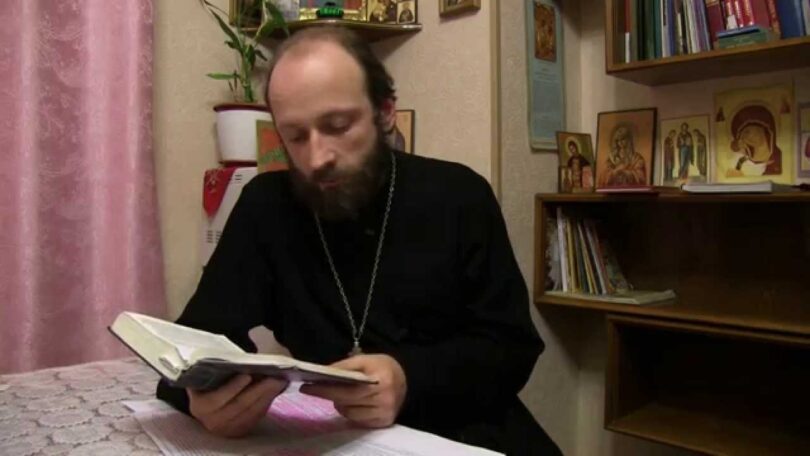 An attempt to analyze recent events in eastren Ukraine through Gospel narrative.

Priest Nikolai Savchenko is one of the few people who have experienced all stages of the history of the ROCOR parishes in USSR/Russia, which had openly existed there since 1990. Fr. Nikolai was also among the very few ROCOR members in Russia who were able to transcend their personal experiences and beliefs and help restore church unity in 2007. At the Fourth Pan-Diaspora Council in San Francisco he gave a talk on
Restoration of Eucharistic Communion and Overcoming of Divisions in the History of the Church.

From 2008 to 2010 Fr. Nikolai was a deputy rector in the London cathedral of the Russian Church Abroad. When the parishes of the ROCOR in Russia were finally closed in 2012, Fr. Nikolai became a priest of the Moscow Patriarchate in his native St-Petersburg.

Fr. Nikolai is a great Russian patriot. In this short sermon he speaks against the current anti-Western hysteria that is spreading in the Russian media. Referring to the events of Christ’s crucifixion, Fr. Nikolai points out that pursuing one’s national agenda may lead to a rejection of Christian values.

Father Nikolai, what is currently happening in Eastern Ukraine is, for many of our parishioners, specifically for people from ROCOR, very much in keeping with what was being said in the past – with those ideals which the White Movement had placed before it.  And there is specifically a feeling that an empire is being reestablished, one that is definitely Orthodox, in contrast to, let us say, the postwar period.   What can be said about this?   How can we comment about this?  And as a ROCOR priest who is now in the Moscow Patriarchate but who knows our tradition, you take a somewhat different position, you have another approach.  Please clarify it and comment on what I have said.

Of course, for a Christian, the chief value should not be empire, or military power, or the ability to inspire fear and terror before neighbors, but absolutely different values – and we all understand what these values are.  I would even say more, that this is an important question and also a temptation when we ask if it comes from an external force or if it is a virtue.   This isn’t the first time this issue arises for Christians.  The first such question arose during Our Savior’s earthly ministry, when He came to bring a new Testament, rather than to be a messiah, vanquishing other nations with fire and sword.  And we know what fearsome danger the Jewish people faced at that point.  They perceived a messiah as a kind of a new Stalin – or an old Stalin? – whose image would be power, devastating force, “we are feared.”  And so the Jews accepted a faith in such a messiah, and rejected faith in Christ – they rejected Christ’s image, can you understand that?  And moreover I need to say that the Jews of those days had more justification at various points than we have.  Then Rome was occupying Judea.  Then Rome was propagating its pagan ideals.  Today in Russia we hear the media constantly preaching enmity against the West.  So why didn’t Christ preach enmity against ancient Rome back then?  Ancient Rome was further from a moral ideal than today’s West.  Today’s West is still partially Christian, at least partially.  Ancient Rome was totally pagan.  Judea was totally a colony.  We are not colonies in the least.  We are a huge powerful country with thousands of nuclear armaments, with hundreds of units capable of delivering them nuclear armaments.  Who could defeat us, or wage war against us?   Why, only madmen.  That’s why it seems to me that the Old Testament Jews had more human reasons to be at enmity against Rome, against the West.   We have our economy, our ruble is solid, but what did the Jews have?  Just shekels, those coins of theirs which remained in the Old Testament Temple – nothing else.  Everything else was Western currency.  Thus I believe we are now faced with just the same kind of temptation, choosing between Christ and a false messiah, between Orthodoxy and the image of a new Stalin, defeating enemies and inspiring terror by fire and sword.   And I feel that many of us have not been able to perceive and resolve this temptation correctly, swallowing this bait.  And this is very dangerous.  It seems to me that we should realize and understand this right now, and cease such enmity against the West, which is most intense.  And, correspondingly, we should stop this fratricidal war as well.  Why, Ukrainians are much closer to us than the Galileans, and more so the Samaritans, were to a Jerusalem resident.  That is what’s important.  And it’s amazing that this temptation has now equally taken hold not only of Communists and Socialists, but also the so to speak White Guards, who also envision the greatness and might of an empire.  With this comes the revelation that this web of temptation has entangled everyone at once.  And this is so insidious, so seductive.  It is this web that needs to be cast off.  We need to end this fratricidal war.

You know, let me put it this way.  If we look in the eleventh chapter of the Gospel of John at the words of the High Priest Caiaphas it says that he explains that this Man, speaking of Christ, performs many signs.  If we leave Him like that, everyone will believe in Him, and the Romans will come and take over these people.   Forgive me, I’m quoting by memory.  It appears that Caiaphas brought even some sort of anti-Western motive into the issue of the Savior’s crucifixion.  In other words, it was as if he had decided that the Savior had to be crucified so that his native land would not be enslaved, God forgive me.  Here is the danger, do you understand?  And now we are faced with something similar.  And in this lies the spiritual essence of this phenomenon, this fratricidal war.