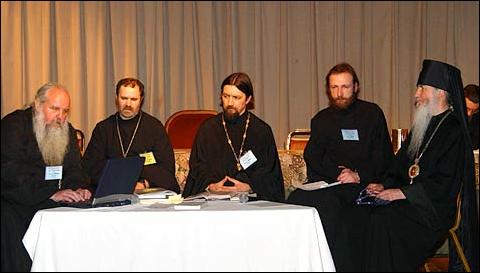 The ecumenism round-table during all diaspora conference in Nyack, 2003. Deacon Nikolai Savchenko, second from the left. Photo: synod.com

Fr. Nikolai, you have publicly stated your position regarding the situation in Ukraine; in interviews, you have – very gently – made appeals for peacemaking. (And such appeals, of course, can be nothing but gentle). Have you come up against any issues regarding the common belief that a priest should simply pray and not, how to put it, mingle with the crowd, with people on the outside? Any doubts as to whether a priest should be taking a stand, attending protests? Does this behavior not transgress what is required of a Russian Orthodox priest? Are you able to comment on this debate?

Personally speaking, what is the most important issue at stake here? It seems beyond doubt to me that we must act as peacemakers. We must be the bearers of reconciliation. In this, too, we must be the bearers of the Word of God. This is beyond any doubt. As for what specific forms this takes, here there is scope for discussion, a much-needed and necessary discussion. We can raise the question of whether doing this or that was right or wrong, but it is important to us that we show ourselves to be peacemakers. As for a priest attending a public gathering and whether that is permissible or not – this is, indeed, debatable. What seems to be the important thing, to me? First of all, priests should not take part in political demonstrations. But if this is a gathering for peace, the priest has the right to attend, because peace-making is above all forms of politics, any kind of politics. As for priests taking part in public gatherings or events, we need to tread very carefully in deciding whether this is something they should do. It is not without precedent in the history of our church: after all, members of the clergy took part in medieval town assemblies. Indeed, we have, of course, forgotten that culture of town assemblies. This has not been a widespread practice for 500–600 years, but in the past, metropolitans and archbishops and the clergy attended them. And, of course, their presence lent these assemblies a more dignified air. So, this is why we should carefully balance both of these factors. There have been occasions, in the history of the Novgorod Principality, where the anger of the mob turned on individual representatives of the church, archpriests and even archbishops of Novgorod. Or there is this example: in the century before Saint Prince Alexander Nevsky, there had been fifty-five different ruling princes; several dozen of them had been deposed. In at least five cases, the archbishop of the time had been deposed with them and both sides of the conflict had been Orthodox Christians. These cases are not a model of any kind, but they show us the path to understanding the difficulties and temptations involved in such bellicose public acts. This is why a priest should not take part in political events, but if we are dealing with the struggle for peace, with advocating for peace – well, in that case it is not even advocating, it is in fact preaching. This is the kind of understanding that, I think, we should carry with us.