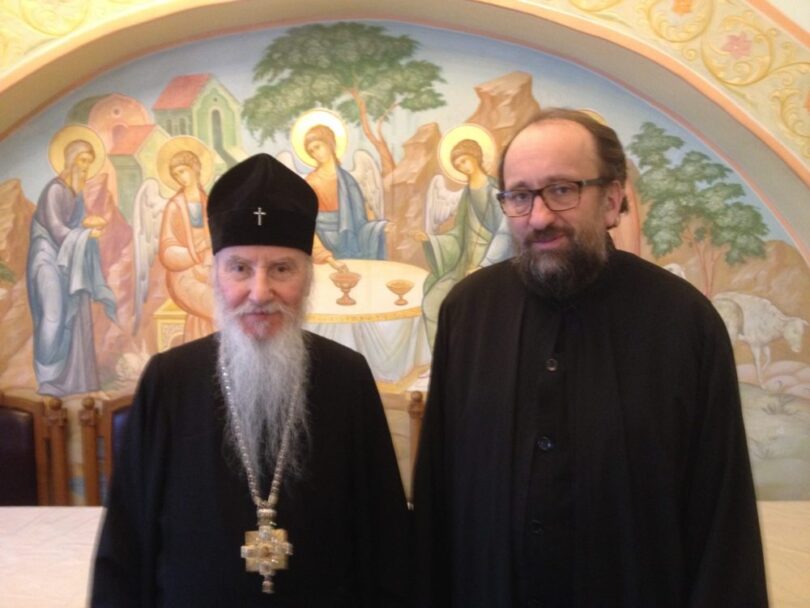 With Archbishop Mark of Berlin and Germany (ROCOR), Chairman of committee

An account on work in a canon law committee of Inter-Council Presence, seminar in Moscow and presentation in Seacliff, NY

On March 11, 2017 Assistant Professor of Canon Law and Russian Church History, Deacon Andrei Psarev concelebrate at the All-Night Vigil with Archpriest Nikolai Balashov, rector of the Church of the the Renewal of the Church of the Resurrection of Christ in Jerusalem  (in the Briusov Pereulok) in Moscow, in the church’s main side chapel, and at the Divine Liturgy on the following day. 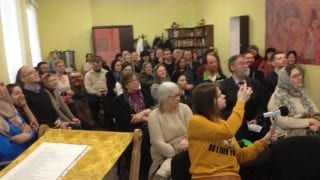 Participants of discussion of pivotal points of ROCOR’s history

This was followed by a talk in the parish house on Pivotal Points in History of the Russian Church Outside Russia accompanied by infographics.  Fr. Nikolai, formerly secretary of the Commission on the Restoration of Unity in the Russian Church, added to the talk with living recollections of the process of restoring relations, of which he was a direct participant.  This was already the third appearance by Deacon Andrei before the hospitable parish family of the Voskresenie Slovushchego Church na Uspenskom vrazhke over the past year.

On March 14 Fr. Andrei took part in a meeting of the newly formed Commission on Canon Law of the Inter-Council Presence, which took place in the library of the Sretensky Seminary.  The work was headed by Commission Chairman Archbishop Mark of Berlin and Germany (ROCOR). 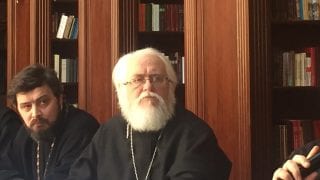 This encounter included representatives from the Synodal departments of the Russian Orthodox Church, religious school faculty, and experts in civil and canon law. The commission continued editorial work on the document on church penalties, and, while discussing other issues, made plans to conduct new encounters, round tables, and continued working on the codification of the sources of the Russian Orthodox Church’s canon law. The discussion was conducted in pastoral, compassionate spirit toward our common fallen nature.

On March 15 Deacon Andrei Psarev took part in a meeting of a scholarly seminar as part of a project entitled The History of the Russian Orthodox Diaspora, conducted by the Center for Religious and Church History of the Institute of General History at the Russian Academy of Sciences. 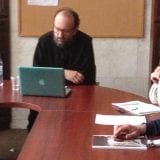 Fr. Andrei spoke on the subject of “Goals and Challenges Facing the Russian Church Abroad and Their Conciliar Resolution.”  During his lecture the speaker defined the understanding of conciliar action, dwelling on the current problems of ROCOR’s life and on the possible ways of overcoming them by involving ordinary Church members into Church life. Discussion following the lecture touched upon the significance of the Russian Church Outside Russia for contemporary Russia. 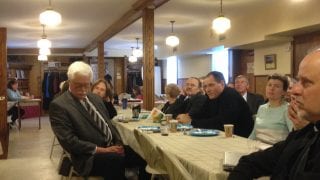 On Sunday after the Divine Liturgy Fr. Andrei offered a talk on the same subject he spoke on before the Russian Academy of Sciences, and it was dedicated to the memory of Metropolitan Laurus (on March 16) and to the tenth anniversary of the restoration of unity within the Russian Orthodox Church, as well as to the forthcoming Bishops’ Council of the Russian Orthodox Church Outside Russia.  This brought forth lively discussion, which was enriched by the participation of Fr. Seraphim and Hegumen Photius (Ulanov), the second priest at the Protection Church in Glen Cove and confessor for the Dormition Novo-Diveevo Monastery.