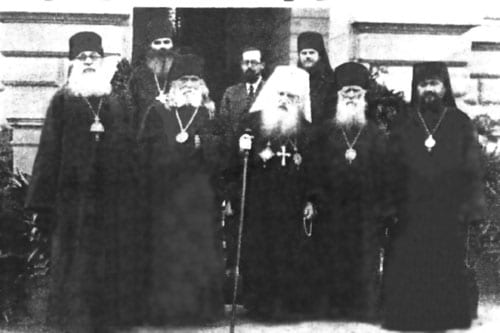 Members of the Synod of Bishops with the Bishop Nestor in Sremsky, Karlovets

The Russian hierarchs and clerics abroad of the so-called Karlovatskii group, having rebelled against the lawful authority, and despite many years of correction remaining in schism, is given over to the ecclesiastical court, being guilty of breaking Apostolic Canons 31, 34, and 35, Canons 13-15 of the Twice-Called Council [Constantinople, 861 – trans.], and others. They are relieved of their Church duties (if they have any) until their repentance and subsequent decision of the court.
Moreover, in accordance with the above, the following bishops are suspended: the former Metropolitan of Kiev Antony, the former archbishop of Kishinev Anastassy, the former archbishop of Zabaikalsk Melety, the former archbishop of Finland Seraphim, the former bishop of Kamchatka Nestor, and also bishop Tikhon Lyaschenko, bishop Tikhon, the leader of the Karlovites in America, and bishop Viktor, their leader in Peking.
To warn Orthodox hierarchs, clerics, and laity, that those who enter into prayer with the schismatics, or receive their sacraments or blessings are subject to the same punishment as them, in accordance with the Church canons.
To decide at a later date, in accordance with the acting rules, regarding Seraphim Lade, who was received into the Karlovites in a bishop’s dignity, after clarifying the time and all circumstances of how he received hierarchal orders.
To assign His Eminence the Metropolitan of Vilno and Lithuania to inform the heads of other Autocephalous Orthodox Churches and the Russian hierarchs, clergy, and laity abiding in Western Europe — especially those under suspension — of this decision. To assign to His Eminence the Metropolitan of Japan [Sergei (Tikhomirov)] to inform those in the Far East. To assign to His Eminence the Archbishop of the Aleutians [Veniamin (Fedchenkov)], patriarchal exarchate, to inform those in America.
Thus, decrees are to be sent to these bishops to fulfill their duties, and to the other diocesan bishops for their information. These decisions are to be published in the Journal of the Moscow Patriarchate [published in no. 22, 1934].