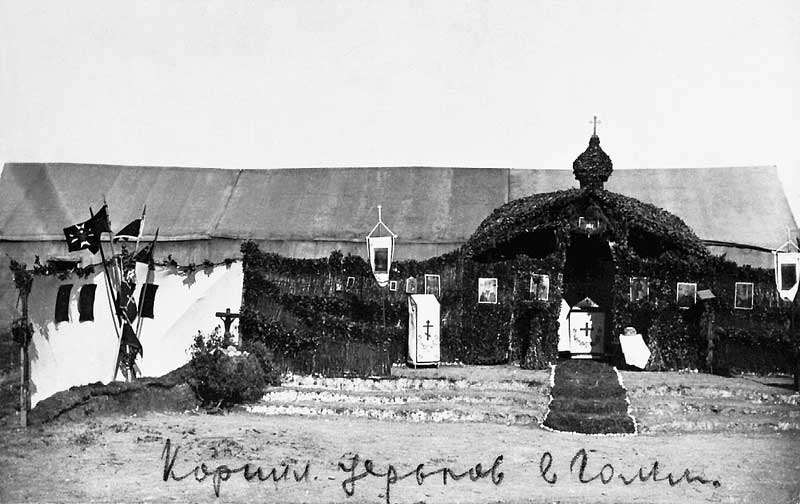 A Russian Church at a refugee camp in Galipoli

This is a translation from Russian of the document that has been often cited as permission from the Ecumenical Patriarchate to establish a Russian ecclesiastical administration abroad (e.g., Fr. George Seide, History of the Russian Orthodox Church Outside of Russia from Its Beginning to Present, Part III. Chapter 1, The Synod of Bishops). It would be useful to retrieve the documents submitted to the patriarchate by the Russians and the Greek original of the text, especially since it is reproduced here from a pamphlet associated with the circles of pro-Soviet refugees in Istanbul.

It is also interesting that this document is signed by the Locum Tenens of the Patriarchal Throne Metropolitan Dorotheos of Brussa, the same person who signed the groundbreaking ecumenical encyclical on behalf of the Patriarchate,”Unto the Churches of Christ Everywhere”, in January of 1920.

Our beloved brother and concelebrant in Christ God, the Most Eminent Anthony, Metropolitan of Kiev and Galicia, bestows a brotherly kiss in the Lord to your beloved Preeminence.

Report no. 1 from the tenth of the past month [November 1920] was read at the meeting of the Holy Synod, which your Most Honored Preeminence, together with the eminent hierarchs who added their signatures to it, felt it necessary to present regarding the difficult situation which has arisen in view of the events that have transpired in the matter of pastoral direction and the satisfaction of religious needs, both of the numerous Russian soldiers and refugees, concentrated among various special camps and locations in Orthodox countries, and among colonies, which until now made use of direct pastoral direction on the part of the Most Blessed Patriarch of All Russia and bishops in Russia.

The Holy Synod, upon reading through this report, first of all expressed its sympathy regarding the lengthy and great trials of the pious Russian people and its sister, the Holy Church of Russia, and at the same time prayed fervently for a quick cessation of the disasters.  Thereupon it discussed attentively the request presented by your Eminences regarding the satisfaction to a sufficient degree of the religious needs of the abovementioned flock of the Russian Church, which currently is temporarily outside Russia’s borders and has no contact with her.

Following favorable discussion of this request the Holy Synod ruled that your Preeminence and the other listed hierarchs:  His Eminence Platon, Metropolitan of Kherson, His Eminence Anastassy, Archbishop of Kishinev, His Eminence Theophan, Archbishop of Poltava, and His Eminence Benjamin, Bishop of Sebastopol, overseeing the army and navy, might develop a temporary ecclesiastical committee for the pastoral servicing of the abovementioned population under the supreme direction of the Ecumenical Patriarchate, in order to oversee and guide the general church life of the Russian colonies within the boundaries of Orthodox countries, as well as of the Russian soldiers and refugees situated separately from the other Orthodox population in towns, villages, camps, and special locations.  You will be concerned with sending priests, antimensia, preachers, and everything necessary to them, visiting them in person, dispelling with exhortations doubts that may arise, putting an end to conflicts, and in general you will perform everything necessary that the Church and religion impose in order to console and encourage Russian Christians.

Regarding marital conflicts that require proper investigation by a court, interested parties, as is required, should direct them to the lawful ecclesiastical court of the archbishops of Ecumenical Throne of Constantinople, and, in general, to the legal courts of those Orthodox countries in which refugees dwell, and directly to the court of the Ecumenical Patriarchate, if such cases arise in Russian colonies.

Informing you with pleasure of what has been stated in this letter, we pray anew that the Lord may bring a quick end to the disasters and trials of the pious Russian people, and bestow consolation and rebirth upon.