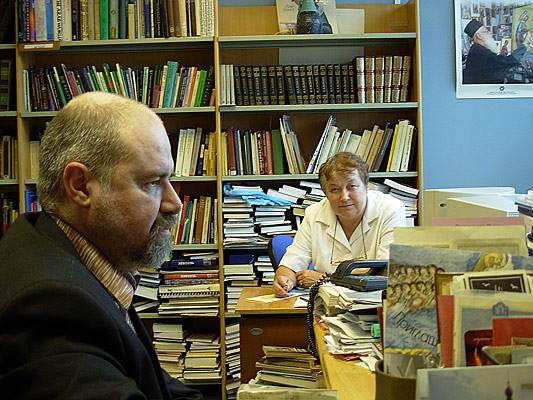 Alexander Gurevich is on the right

A researcher of Russian religious diaspora explains about his reference project.

Alexander Gurevich was born on June 26, 1960, in Moscow. He graduated from the Moscow Institute of Management in 1982 and holds a PhD in history from the Moscow State University of Humanities (2005).  He has served as Senior Research Fellow at the Religious Literature Center attached to the Russian State Foreign Literature Library and also at the Research department of the Russkoe Zarubezhie Library and Foundation. He compiles and supervises the biographic and bibliographic directory of religious personalities and writers among Russian emigrants (Religioznye Deyateli I Pisateli Russkoi Emigratsii). A. Gurevich is a member of the Franco-Russian Committee on Studies of the Russian Emigrant’s Heritage; of the editorial board of the encyclopedia of “Unforgotten Graves” (Nezabytye Mogily) published by Russkoe Zarubezhie; and of the Russian Orthodox Church’s Archives division of the Russian Association of Archivist Historians. His main scholarly interests are religious activities of Russian emigrants and church archives. He has authored over forty scholarly publications.

Kindly tell me what exactly your Portal is like. What is the story of its appearance?

We call our project Religious Activities of Russian Emigrants. We create an information base of the biographical facts of the religious personalities among Russian, Ukrainian, and Belorussian émigrés. Working on the Portal is a small group of researchers which I have the honor to lead. The Portal’s main address is http://zarubezhje.narod.ru. This year, yet another one was added, http://ruszarubezhje.ru. Our project will soon celebrate its ten years of existence. We took for it basis the well-known reference book by N. M. Zernov [which translates as] Russian Émigré Writers: Biographic Facts and a Bibliography of Their Books on Theology,  Religious Philosophy, Church History, and Orthodox Christian Culture, 1921-1972 where facts on 360 religious personalities have been collected. As of today, the Portal contains biographic facts on more than 10,000 persons. Unfortunately, the facts on many of them are scarce and fragmentary, but we keep updating the Web site. I’d like to cite one recent and characteristic case.

A certain religious personality was known to have had for many years served as psalm-reader at an Orthodox parish of Edinburg. We added to the record our own remark stating that the man “probably was an émigré in Great Britain.” Yet we recently received a letter from this sexton’s descendant who was greatly surprised by the circumstance of his ancestor’s emigration to Scotland and asked where we obtained that knowledge from. So we set out to find out the truth, and it turned out that there is a town by the name of Edinburg in Latvia, where the said church servant lived, and it was in that town’s church that he acted as psalm-reader.

We also try to answer the Portal visitors’ questions, and our correspondence with them pretty often turns out mutually profitable. Let me stress out that all the materials in our information base are available for everyone totally free of charge.

Have there been any grants or other support that enable you to develop the Portal?

Yes, we received certain grants that have supported us in our work on the Portal. First of all I’d like to mention here the American Fulbright Program and Institut des sciences de l’homme of France. I would also like to express my heartfelt gratitude to the management of the Russian State Foreign Literature Library, of the Russkoe Zarubezhie Library and Foundation, and of the State Archive of the Russian Federation, whose collected materials we used in the process of our work.

How often do you have to update the Web site or correct inaccuracies?

As I said, we update the site on a regular basis; we correct inaccuracies, make additions and changes. We very much appreciate it that our site’s numerous visitors often thank us for our work, inform us of inaccuracies they find, and send in additional information.

What is the Portal’s traffic? What kinds of comment can you give a sample of?

The portal gets visited each day by over 300 users from all over the world – from Russia, Ukraine, Belarus, the USA, Canada, France, UK, Germany, Australia, Poland, Austria, China et al. During the Portal’s life time so far its users have visited over 1.5 million    pages.

What other projects related to ROCOR do you participate in?

We have for years actively participated in the acquisition of books from Russia by the library of the St. Trinity Seminary in Jordanville, NY. I also happened to make certain additions to the Project of a Guide to the St. Trinity Monastery’s Necropolis which was created by the Hieromonk Evtichii (Dovganiuk).

Whom would you mark out among the contemporary Russian historians involved in the history of the Russian Orthodox Church outside Russia?

This question is the most difficult one for me because while answering it one runs the risk of forgetting somebody. Still, first of all I’d like to mention those researchers I’ve been fortunate enough to work with: the Archimandrite Augustine (Nikitin), the archpriest Dionysius Pozdnyaev, Archpriest  Michael Protopopov, the Priest Sergius Model, Deacon Andrei Psarev, A. V. Popov (whom I regard as my main mentor and inspirer), V. I. Kosik, A. Nivier, A. A. Kostriukov, A. A. Kornilov, A. K. Klimentiev, S. S. Levoshko, M. V. Shkarovsky, N. T. Eneeva, V. N. Yakunin, and many, many more. I apologize in advance to those I forgot to mention.