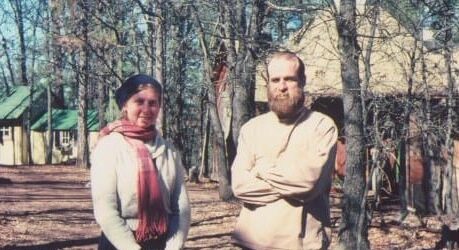 This photograph was taken at Platina in the late 1970s. Does anyone here recognize the woman in this picture?

Most Rev. Nektary, Bishop of Seattle

I am writing today to share with you some observations Fedot Semyonovich and Silvestre Feodorovich made on our way home.

A very lively conversation ensured as we were driving home across the Golden Gate Bridge into Sausalito. Speaking about you and Vladyka Anthony, Fedot said, “Had there been people like that in those days [when Patriarch Nikon was alive], there would not have been a schism.”

Later, reflecting on the unexpected beauty of the Divine Services we witnessed on Saturday evening, he said, “Yes, we love the priestly services, too, but now we don’t have a priesthood. They [the Nikonians] tormented our priests. They destroyed them.”

Here he mentioned several examples of cruelty on the part of the Nikonians. It seems that both God and our Old Believers still remember the persecutions during Nikon’s time and afterwards.

A great deal more was said as we drove on, but my feeble memory won’t let me give you the exact words.  Nevertheless, I feel obliged to pass on to you the general direct of the conversation, especially in view of the fact that it coincides so closely with your own “modest hope.” But first permit me to explain to you the Old Believer perspective, which serves as a background for our conversation.

A long time ago, Nikon and Avvakum quarreled. Nikon began persecuting Avvakum. Avvakum died. So did Nikon. The quarrel goes on. But who’s to blame? The Church of Christ has been weakened by the schism. We must seek reconciliation. But how do we begin?

Nikon gave offense. So Nikon is obliged to make a prostration before the one he offended. In the presence of God and in the presence of Avvakum, Nikon must seek forgiveness. But Nikon isn’t around anymore, and neither is Avvakum. It is up to their posterity to be reconciled to each other.

Woodburn’s Old Believers say that they’re the only ones who have kept the True Faith, i.e., the Faith of John Chrysostom, of Vladimir the Great, of Aleksandr Nevsky and of Sergei Radonezhsky. They believe that their ancestors defended the Faith against the heretical innovations of Patriarch Nikon – and that many of their ancestors suffered for this true Orthodox Faith.

Furthermore, the Old Believers consider that the Russian Orthodox Church wandered off the path of salvation and lost the grace [of Apostolic succession] when it accepted the Nikonian innovations.

Still further – even with all these obstacles in mind – I understood from the conversation with my fellow travelers that your “modest hope” might yet be realized.

The more astute among the local Old Believers are between a rock and a hard place. They understand that they are in need of the spiritual nourishment that only the priesthood can bring, but at the same time they are still smarting for the persecutions, which prevents them from turning for such nourishment to you, the successors of those who tormented their ancestors.

The beauty and majesty of the priestly services and the Christian love and humility, with which you received us greatly soften the Old Believers’ path to unity. But if there were [no feeling] of offense, it would be so much easier to focus our attention and efforts on the question of unity. It seems that unity can happen only after reconciliation.

“Therefore, if you bring your gift to the altar, and there remember that your brother has something against you, leave your gift at the altar and go first to be reconciled with your brother, and then come and offer your gift.”

The Old Believers think that they are the ones who were offended and are guiltless. If you wish to be reconciled with them, you have the right to set the matter in motion. You may be reconciled at any time. The door is always open.

And reconciliation wouldn’t be difficult.  My fellow travelers suggested the following scenario…

The Metropolitan must initiate the effort because he is the head of the Church. He has the right to call a meeting in the Woodburn community. Let him compose a letter, explaining that he seeks reconciliation, and send it to one of the local pastors. There could be a meeting at a designated date. All the elders could gather. At this meeting, the Metropolitan could read a short history of the persecutions, acknowledge that this was a great mistake and – as the head of the Russian Orthodox Church and the heir and representative of the late Patriarch Nikon – make a prostration before the elders.

What could happen next? If the Holy Spirit is present, there could be peace, love and tears of joy. This could be followed by protracted discussions about unity. Nikon’s innovations could be at the center of the discussion. Of course, you know better how to show that the Russian Orthodox Church has not lost the grace of Apostolic succession, that there have been righteous people in the Church even after Nikon, and that unity in the Faith does not preclude diversity in its outward expression.

And it would be well to magnify the memory of Archpriest Avvakum.

Forgive me, Vladyko, for having written all this. I, too, would like to see an end to the schism, and I feel an obligation to share with you my own understanding of the matter and the thoughts of the Old Believers who had accompanied me to San Francisco. And forgive me for the violence I have done to the Russian language.

Please convey a filial greeting to Vladyka Anthony and Father John. Do not forget

Your servant in Christ,