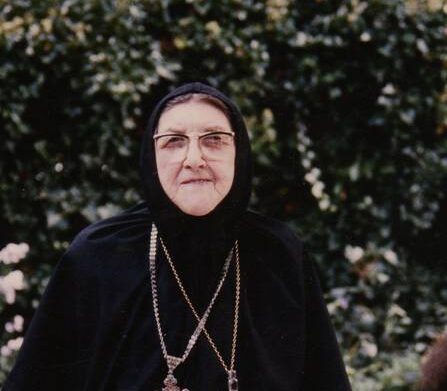 A brief biography of an Abbess of Lesna convent in France, a sister of Bishop Gregory (Grabbe).

The nuns of the Lesna Convent in France knew that their superior, Abbess Magdalena, was not well. But because she was habitually silent on the subject of her health, it came as a shock when, at the end of June, doctors discovered that she was afflicted with the advanced stages of cancer. The Abbess declined any palliative measures which may have briefly prolonged her life, and returned to her convent to prepare herself for her departure to the next world.

As news of her condition spread, those who were able came to ask a final word of counsel and to express their gratitude for the spiritual assistance which Abbess Magdalena had bestowed over the years. Her room filled with flowers sent by well-wishers, and the phone rang constantly with calls—many from the United States, Canada and distant Australia-inquiring about the Abbess and conveying the respect and love which she had inspired through a life of concern for others.

Born Nina Grabbe, the Abbess was the youngest of three children in a notable and deeply Orthodox family which counted among its close ancestors the famous Slavophile poet and theologian A. S. Khomiakov. Both grandmothers, active in promoting charity in word and deed, had a marked influence on the children.

Young Nina was especially close to her mother. When the latter died in a refugee camp on the Greek island of Lemnos (the family had fled the Bolshevik terror), Nina was left to care for her father. Although her heart was already drawn to the monastic life, she postponed the fulfillment of her desire out of a sense of filial responsibility.

They were resettled in Volhynia when the Soviet advance during the Second World War forced them once again to flee. Unhappily, they were accosted en route by a Soviet patrol which imprisoned the father. Together with her two nieces who were under her care, Nina Pavlovna found temporary refuge with a Polish peasant family to be near her father and supply him with provisions. It was not long, however, before her own life and that of her nieces was threatened, and she fled with them to Lvov. She was able at length to reach Belgrade and join her brother’s family. Here, at the end of the war, she entered the Lesna convent which a few years later relocated to France.

At her tonsure, she was given the name Magdalena and soon became Abbess Theodora’s chief assistant. As Abbess Theodora’s health declined, nun Magdalena took on more and more responsibilities which, with all the post-war refugees seeking material and spiritual aid, were considerable. As abbess, she continued to manifest concern for the needs not only of her family of nuns, but also of the many who turned to the convent as a spiritual haven.

Just as Abbess Magdalena had been of comfort to many in their hour of trial, so she was comforted during the last weeks of her earthly life by the presence of the Myrrh-streaming Icon. Daily, after the Divine Liturgy, the Icon was brought to her cell and there an akathist was sung.

On the night of September 2, it became clear that her time had come. The Abbess’ brother, Bishop Gregory, living in retirement at Lesna, was called to read the prayers for the departure of the soul. When he finished, the Abbess lifted her head for a moment, looked around, and then closed her eyes forever. Miraculously, she had lived much longer than expected by the doctors and without the agonizing pain normally caused by cancer. Indeed, she was blessed with that “peaceful and blameless” end of her life which the Church so frequently entreats for all her children.

The Abbess’ funeral was served by Archbishop Anthony of Geneva, Bishop Gregory and Bishop Mark of Germany. The Archbishop, in his sermon, expressed his share in the grief experienced by the sisters at the loss of their Mother Superior. It was a comfort that the French authorities gave special permission for the Abbess to be buried next to the convent church, together with Abbess Theodora. 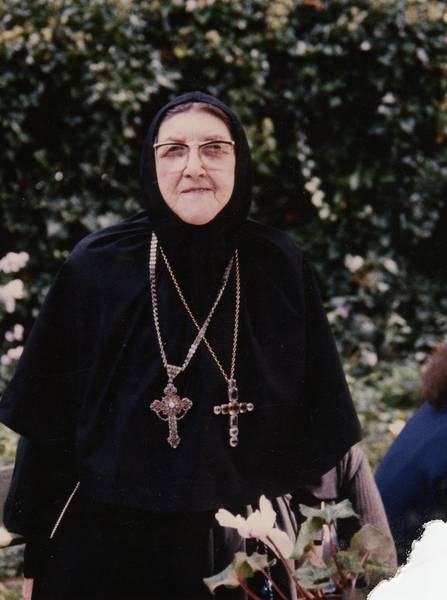 In accordance with Abbess Magdalena’s wishes, Archbishop Anthony appointed Nun Athanasia as the new superior. We pray that God grant her wisdom and strength to inspire and guide those under her care along the angelic path to those heavenly habitations prepared for His devoted servants. There, too, may He grant to the departed Abbess Magdalena rest with the saints, and may her memory among us be eternal.