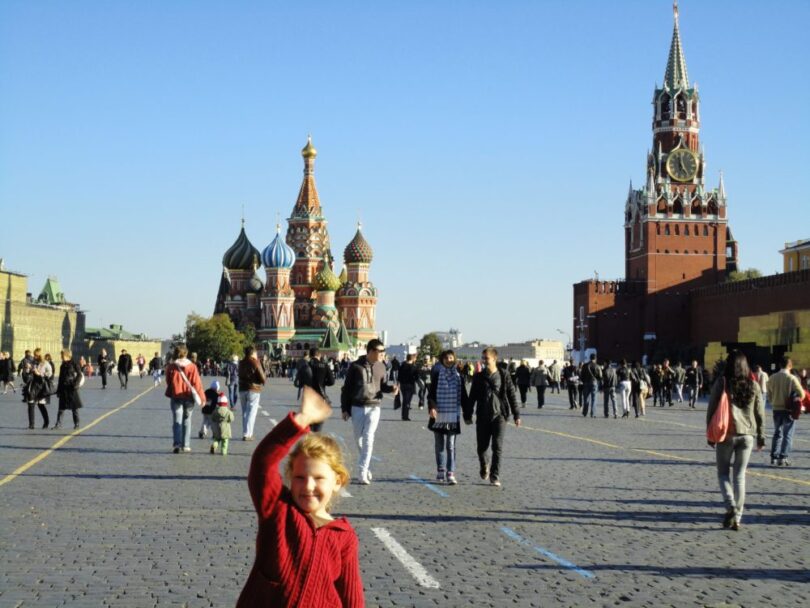 A story from Metropolitan Vitaly (Ustinov) about a young girl who radiated joy.

It is often necessary for me to travel by plane throughout my scattered diocese, visiting parishes and sometimes even remote communities of our Church’s faithful. Unexpected encounters can occur. This is Divine Providence acting in people’s lives.

Once, returning by plane to Montréal, I worried that this time I had been unable to bring anything home with me! I sat, lost in my thoughts, until my ears were struck by hearty, pure laughter erupting from a small group of passengers that surrounded a small (or better said, a crumb-sized) girl — still a toddler, really — whose carrying voice rang like a bell and could not be drowned out, whether by the roar of the plane or the cacophony of voices.

I began to listen and glance at this group. The young girl fascinated everyone with her familiar manner, sincerity, and purity.  She looked everyone in the eye with her bright blue irises and confidently asked, “What’s your name?”, “Why are you flying?”, “Where are you coming from?”, “Where are you going?”, and other, most unexpected questions. When she saw that she had no success in softening a person, she attempted to crawl on their knees, hug them, kiss them on the cheek. No one could avoid her attention. Her mother did not succeed, despite her best efforts, in tearing the child away and forcing her to sit still and behave. Active, open, and exceptionally attentive, she maneuvered back into the aisle between two rows of seats and once again approached everyone and enveloped them in the warmth of her pure child’s heart.

In Ottawa, a new passenger boarded. He was a full-bodied man with a trimmed beard, very serious — perhaps a high-ranking bureaucrat, perhaps a professor — fully conscious of his own importance. This was a man to whom one does not simply ingratiate oneself, of whom one does not simply ask a question. Very quickly, he became the object of the young girl’s attention. She laid eyes on him and again without barriers asked him the most straight-forward questions. And here a miracle occurred! The great man suddenly and completely transformed, his face was decorated in a wide grin, his eyes, to this point serious and even stern, sparked with true emotion. Before us sat a new man!

Well, then it was my turn. Unnoticed, she somehow rose up at my feet and asked permission to sit next to me since two adjacent seats were empty. She asked who I was. My mode of dress did not perplex her in the least, though she must have found it peculiar. She pointed at my panagia1 and asked who was depicted on it. I told her this was our Saviour, Jesus Christ. She asked if I had a mom and dad, where I lived, and so on. “How old are you?” I answered, “Over sixty.” She said that she couldn’t count past twenty but, realizing that my number was clearly high, this most tiny, miniature, four-year-old girl promised to help me carry my briefcase. Then she snuggled her head up to me and kissed the panagia. I made the sign of the Holy Cross over her head. She did not notice my movement, but nevertheless her pure soul felt the Grace of God upon her and she began to kiss my hands. This was so unexpected, so direct that I was extremely touched and shocked by this child, whom no one, of course, had ever taught to kiss a bishop’s hand. Truly, “the human soul is Christian by nature.“2 She did not leave my side even when we arrived in Montréal. Thus I disembarked the plane holding her hand. She would not let go. She enlivened, cheered, and encouraged everyone on the plane. Masks of feigned indifference, hesitance, and formality fell away from many.

We all create our moral cages in which we live for years, often failing to notice our humorously artificial posture. All of this departed from us thanks to a toddler — this little, crumb-size, miniature girl. What more of a miracle do we need! Everyone parted from her with a smile and with emotion. This girl’s name is Angie. Preserve her, o Lord, just so pure and sincere among the moral degradation of human society!