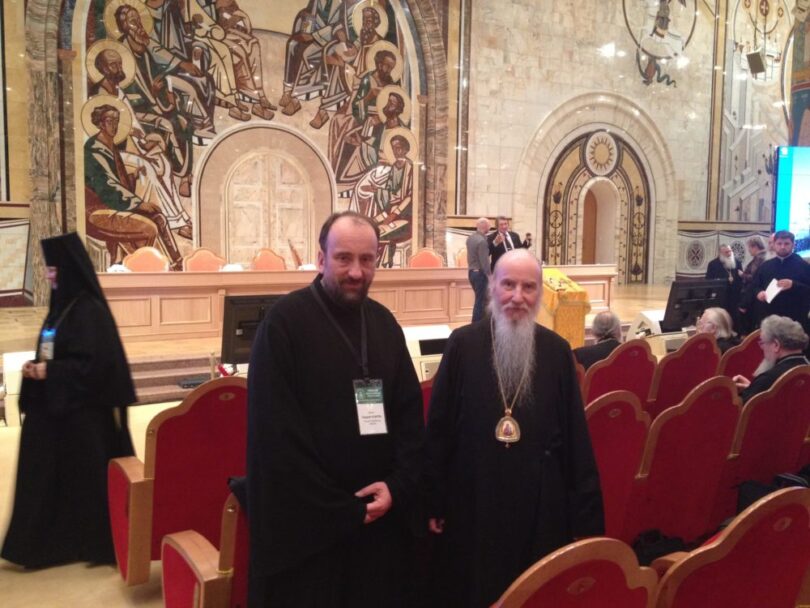 Deacon Andrew (left) with Archbishop Mark at the SME plenum in January 2015.

Deacon Andrei Psarev presents on the Inter-Council Presence (ICP) of the Russian Orthodox Church, and speaks about how the ICP is run and what purposes it fulfills.

A graduate of Holy Trinity Seminary who also holds a Master in Theology degree from St. Vladimir’s Seminary, Fr. Andrei is Holy Trinity Seminary’s assistant professor of canon law and Russian Church history. He has also studied the history of the Russian Church Abroad since 1988, which led to his selection as a participating scholar for the oddly-named “Inter-Council Presence” (ICP) in Moscow. His talk at HTS, illustrated with PowerPoint slides, on November 9, 2017 was a survey of the group’s history and activities.

In his survey of the ICP’s history and activities, Fr. Andrei described the ICP in terms of an American idiom: “think tank”—that is, a collegial body of scholars meeting between the formal sessions of the Council of Bishops of the Patriarchate of Moscow to conduct theological, demographic, and social research. The ICP, based on that research, drafts statements for review by the Patriarch and his bishops.  If accepted, with or without revisions, those documents eventually become official pronouncements of the Russian Orthodox Church.

Holding conferences three times a year since 2010, ICP representatives from various segments of the Church gather to contribute their expertise to the examination of relevant topics, including theological, liturgical, educational, economic, and political issues. To demonstrate the diversity at these meetings, the most recent convention in 2017 was attended by 71 bishops, 21 monastic clergy, 78 priests, 13 abbesses, 3 deacons, 1 rassophore monk, and 44 lay men and women.

Opening the dialogue to the entire world, the ICP posts its documents on the Internet at bogoslav.ru and patriarchia.ru. Those venues allow for comments, which are consolidated and reviewed by the ICP’s editorial committee. That process, though tedious, acts as a barometer to judge the general mood of the Church, and more importantly, allows for inspirations that can profoundly alter the shape of the ICP’s resolutions. The most recent collection efforts garnered more than 1,100 comments on the use of Slavonic as a liturgical language, but only eight concerning the Church’s position on social work and two on the Church’s missionary activity.

Eschewing merely top-down pronouncements, the hierarchy of the Russian Church is committed to promoting discussions among all segments and of the Church, demonstrating a unique balance of vertical and horizontal ecclesiology. Fr. Andrei emphasizes that this distinctly Russian phenomenon creates a space for the clergy and faithful alike to offer opinions and to listen to the opinions of others. Nevertheless, the Patriarch has the final word as the primatial bishop and direct successor to the Apostles in Russia.