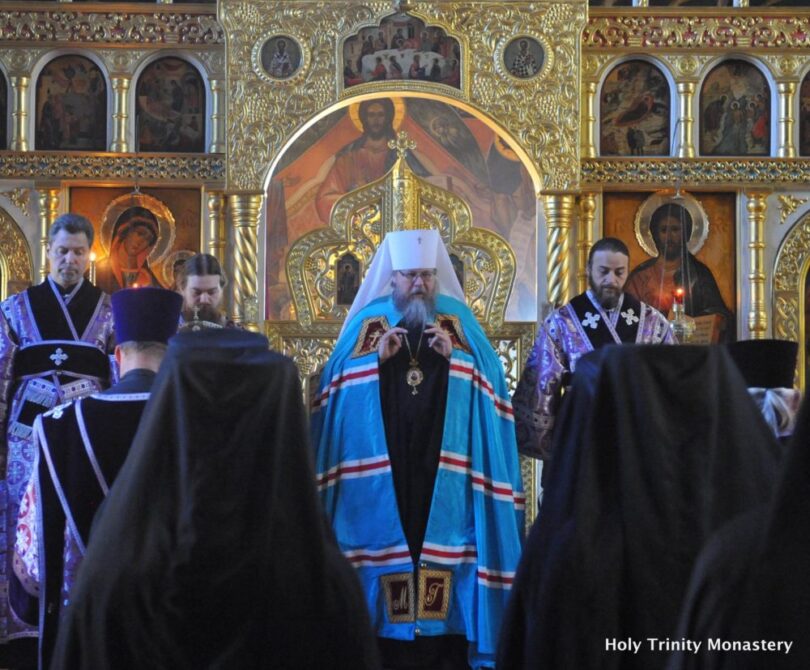 Liturgy on Sunday of Orthodoxy in Holy Trinity Monastery, Jordanville. 2016

His Eminence Metropolitan Jonah (Paffhausen) became Orthodox in the age of 19 having been received from the Episcopalian Church in San Diego at the parish of Our Lady of Kazan (Moscow Patriarchate). In 1981 he graduated with a B.A. from the University California (Santa Cruz) and enrolled in St. Vladimir’s Seminary, where he earned his master’s degrees in divinity (1985) and theology (1988).

James had been attracted to monasticism, when he visited the St. Herman of Alaska Monastery in Platina, CA. In 1989 when the Valaam Society of America, founded by this monastery, extended its activity to Moscow, James moved there as one of the society’s representatives. In 1993 he became a novice in Valaam Monastery in Russia. After returning to America James was ordained to priesthood in the Orthodox Church of America (1994) and the next year tonsured a small schema monk in St. Tikhon’s Monastery in South Canaan, PA, named after St. Jonah of Moscow, the first metropolitan of the autocephalous Russian Church (+1461).

Following the glorification of St. John of Shanghai, Fr. Jonah established a monastery dedicated to this holy hierarch in Point Reyes (later in Manton), California. The foundation of the Monastery of St John of Shanghai under the omophorion of the OCA demonstrated universal veneration of this saint even during the time when the ROCOR and OCA did not have Eucharistic communion with each other. Besides that Fr. Jonah set up a number of sustainable missionary communities on the West coast. Under his supervision future Protopresbyter Peter Heers began publishing a journal Divine Ascent (later the St. John of San Francisco Monastery’s publication).

In November 2008 Archimandrite Jonah was consecrated Bishop of Forth Worth and in the same month he was elected as Metropolitan of all America and Canada, the first convert Primate of the Orthodox Church in America. In 2012 he resigned from this position and in 2015 joined the Russian Church Abroad in the status of a retired bishop.

Vladyka Jonah, for how long now have you been in the Russian Church Abroad?

A little over two years.

A little over two years? I thought you came to us much longer, actually.

Well, I’ve actually been primarily attending the services in the Russian Church Abroad for five years.

Well, I think one of the biggest issues is the difference in compensation. In most Churches  in America the priests are paid a living salary and benefits by the congregation so that they don’t have to work, and especially senior clergy are well compensated; of course, junior clergy not quite so much, but that’s normal. Missions’ clergy compensation of course is a little more sketchy. I think the next step in the growth of the Russian Orthodox Church Outside of Russia needs to be a complete re-visioning of the whole system, not only of the support of the clergy but also the whole financial system for the support of the Church because there are definite things that would be extremely helpful – administrative kinds of structures and various kinds of funds to assist the clergy, to assist education, and to build temples and not only structures but institutions.

Right, but we don’t even have a Pension Committee in our Russian Church Abroad, and sometimes you hear that it’s really too complicated and we don’t have means, we don’t have resources, and basically, our outstanding clergyman are expected to work at additional jobs, so what would be your response to this – that it’s impossible to change?

Well, it’s certainly possible to change. The Orthodox Church in America started out probably in a very similar position. The ROCOR does have new immigrants. It also has a lot of people who are very well-established, well-educated, and have highly lucrative jobs. What has not been taught is the critical importance of supporting the Church on a substantial level. In other words, a constant financial commitment on a communal basis that will allow the Church to develop itself and to develop programs and ministries that people will need, and to develop outreach. There are some very good things that go on in the Russian Church Abroad. One of the things that I was particularly impressed with in Australia was their homes for the elderly, assisted living and even nursing homes that are supported by the Church, and in some cities, there are multiple institutions. There is a good consciousness of that kind of humanitarian outreach. That’s one of things that right now is very difficult to do.  There is that tradition in the past in the Russian Church Abroad. There is still the Tolstoy Foundation in America. There are a couple of nursing homes and things like that but those need to be rebuilt, rethought, redone, and revivified. And, unfortunately, it takes money. People aren’t going to be able to… well, let’s put it this way:  you take a young guy who goes to seminary. What kind of a future is he looking at? He’s looking at a secular job, which is going to occupy 75% of his time, and the rest of the time, even as a priest, is a volunteer position.

Almost volunteer – yes. And it’s nice that people want to do that, and it’s a remarkable and commendable thing that people are willing to make that kind of sacrifice. And, there is an advantage – that it enables a priest to be free of the control of the parish council: he’s not afraid for his salary [in order] to make the necessary kind of decisions. But, on the whole, it makes life very difficult. I believe it’s a great shame to the Church when you have priests who are not able to pay their bills and support their families, or are on welfare with food stamps.

I believe what happens is that we deal with consequences of the previous refugee epoch when everyone was poor and everybody basically worked on a voluntary basis. But the question is: is this model really sustainable for modern reality? Is this something that we need to carry on or is it a cycle that has to be broken down?

What does this mean? What does your emphasis mean?

It means that, regardless of language, regardless of the cultural basis, we’re here to stay, and we need to take up that universal mission that the Lord commanded, which is to go out and bring people in, to preach and teach and to make disciples. Whether we are ministering to new converts and inquirers or to Russian immigrants, the work is the same: to establish communities and build churches to reach out and bring people to Christ.

And use resources as best we can?

Thank you very much, Vladyka.