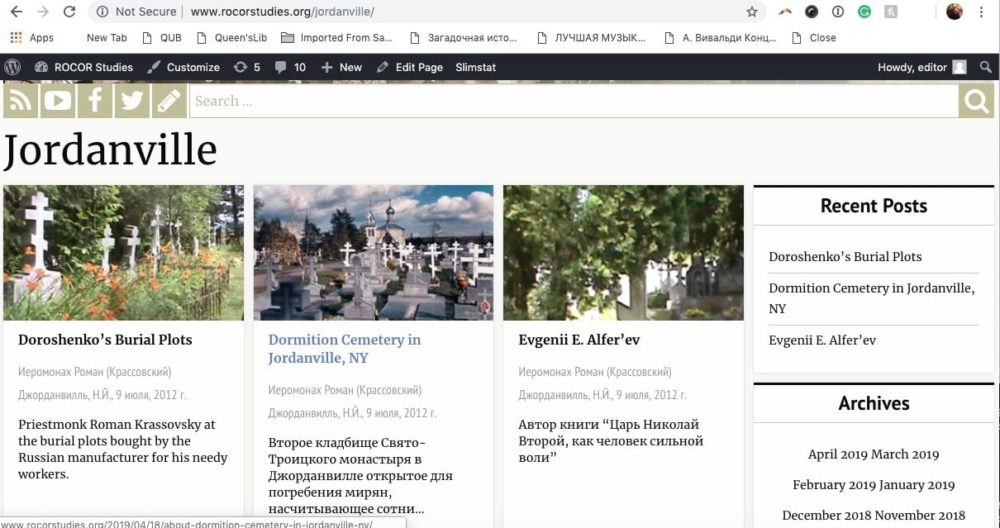 A project dedicated to church people buried in Jordanville cemeteries

The first attempt at compiling an annotated database of the departed who are buried in the cemeteries of Holy Trinity Monastery was carried out in 1996 by an enthusiastic amateur historian from Michigan, Andrei Alekseevich Lyubimov. The results of his research were published in the journal Letopis’ Russkogo zarhubezh’ia (no. 2, 1996 and no. 3 for 1997). In 2005, Hieromonk Evtikhii (Dovganiuk) submitted to Holy Trinity Orthodox Theological Seminary his dissertation, A Draft of a Guidebook for the Necropolis of Holy Trinity Monastery (in Russian). The Holy Trinity seminarian, Vladimir Davydov, developed Fr. Evitikhii’s work, presenting his thesis to Holy Trinity Seminary in 2009. In 2012-14, Andrei A. Lyubimov resumed his cataloging of the cemeteries, having arrived in Jordanville at the invitation of the Foundation of Russian History, headed by the seminary’ dean Archpirest Vladimir von Tsurikov. In 2015, the results of A. Lyubimov’s and Fr. Vladimir von Tsurikovs’ collaboration came out of the Moscow press, Staraia Basmannaia, under the title, Dzhordanvil’skii nekropol’. Meanwhile, in 2012, the internet site, Historical Studies of the Russian Church Abroad, began to video-record numerous commentaries made in Russian by Hieromonk Roman (Krassovsky) and Protodeacon Viktor Lochmatow at selected graves of the Jordanville cemeteries. However, the seminary professor and editor of the website, Deacon Andrei Psarev, did not have the resources for posting annotated video materials on the website. The situation changed for the better in October 2018, when the Canadian foundation, Russkaia Dusha (The Russian Soul), allocated a grant for placing video materials on the website, Historical Studies of the Russian Church Abroad. Each video is accompanied by a reference to the book, Dzhordanvil’skii nekropol’ and can be viewed here.