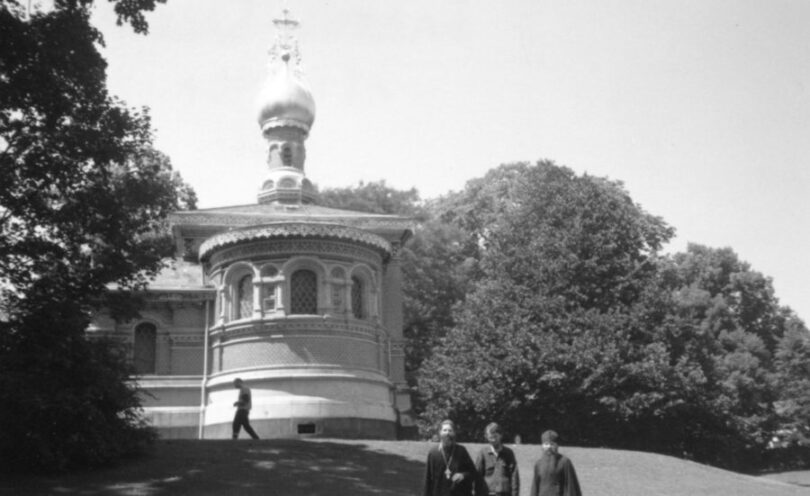 A brief explanation about Russian pre-revolutionary churches and Parish Bylaws.

Before 1917, the Russian Orthodox Church possessed numerous parishes and missions outside the borders of Russia. The majority of these parishes had been established since the 18th century, when Russian colonies of diplomats and merchants with corresponding diplomatic, economic, and cultural links, were founded.

In Western Europe, Russian churches appeared in the 17th century “…At the end of the 17th century Orthodoxy in China began to spread. In the first quarter of the 18th century, the first Russian church in Constantinople was built; later another five Russian Orthodox churches were established in that city and its environs. At the end of the 18th century, Orthodoxy found its way into North America, a hundred years later into South America. In 1833, a Russian Church in Athens was opened; in 1852, the Russian Church erected the Church of the Holy Trinity there. In 1847, the Russian Mission in Jerusalem was established. The missionary activity of the Russian Orthodox Church in Japan began in 1870; twenty-seven years later Orthodoxy appeared in Korea. In 1898, a mission in Persia (Iran) opened, whose task was to strengthen in Orthodoxy amongst the Syro-Chaldean Nestorian Christians, who had united themselves with the Russian Church. In Finland, a diocese of the Russian Orthodox Church existed from 1919.” [1] Russische Orthodoxe Kirche, photographs, p. 144; Bratskii Ezhegodnik.

These communities outside the Russian Empire came under the jurisdiction of the Metropolitan of St. Petersburg. In a few cases, the Russian Church appointed bishops abroad. In North America, a Russian diocese existed from 1870; a vicar bishop administered the Canadian communities from 1905. In China and Japan, several bishops were active at the beginning of our century, ruling the young, blossoming missionary churches of these countries.

The massive flight of the Russian faithful after the October Revolution led to the creation of new dioceses of the Russian Church beyond the reach of Soviet power.

When the Moscow Patriarchate was again able to care for its own parishes in the free world, it appointed bishops for the parishes that had remained faithful to the Patriarchal Church. The hopes of the Moscow Church leadership, that the émigrés would join the Patriarchal Church, led in general to the dispatching of their own bishops where émigré bishops were already residing. If one looks at the index of the “Episcopate of the Russian Orthodox Church,” as it appears in the Orthodox Church Calendar of the Moscow Patriarchate, one finds numerous titles of hierarchs of the Patriarchal Church, which are identical to the dioceses of the Church Abroad or coincide with the diocesan boundaries: Berlin and Germany, Baden and Bavaria, Vienna and Austria, Brussels and Belgium, The Hague and the Netherlands, Argentina and South America, Edmonton and Canada, and many others. [2] Episkopat Russkoi Pravoslavnoi Tserkvi.

Presently, the Church Abroad has fifteen dioceses and two vicariates. In 1938, there were twenty-four dioceses and vicariates. As a rule, the direction of a diocese is in the hands of a bishop. The title of the bishop always refers to a city and the territory of his diocese. The named city is, with a few exceptions, the seat of the bishop. For instance, the diocese of Archbishop Vitalis of Montréal and Canada stretches over the whole Canadian territory, and the seat of the bishop is Montréal. With a few of the titles, the historical origins of the diocese are more important than the actual residence. For example, Bishop Mark of Berlin and Germany’s title refers to all of Germany, including the German Democratic Republic; the seat of the bishop, however, is in Munich. The title of a vicar bishop usually refers to a city, and then the title of the vicariate follows: Bishop Hilarion of Manhattan, Vicar Bishop of Eastern America and New York. A particular deviation from this system took place in Germany after World War II, where vicar bishops, in addition to the title of the city, bore the name of a geographical area: Bishop Paul of Stuttgart and Northern Germany, and Bishop Mark of Munich and Southern Germany.
This can be explained by the fact that the unity of the German diocese was indeed retained, though in practice, since 1950, it consisted of two almost independent dioceses: Northern Germany with the seat in Hamburg and Southern Germany with the seat in Munich.

A diocesan council assists the ruling bishop in the administration, as does also a vicar bishop in geographically large or numerically significant dioceses. The diocesan council, chaired by the bishop, consists of two to five clergymen and as many laymen; it has competence over administrative, economic and financial matters, providing parishes with priests, building churches, founding parishes, etc., in so far as this cannot be carried out by the parishes themselves. At the seat of the bishop, there is a cathedral, usually the diocesan administration with church archives as well as other important facilities depending on the size and importance of the diocese: church printing presses, schools, charitable institutions, etc. The dioceses may organize priestly and pastoral courses, establish monasteries in their territories, church workshops, and businesses. The head of the diocese [the bishop] has oversight over these and also over the individual parishes, and also watches over the church discipline of his flock and clergy and addresses the faithful in epistles. The bishop visits the individual parishes on special occasions, usually on the patronal feast of the church, for the consecration of churches and altars, for the priests’ and communities’ anniversaries. At periodic intervals — yearly or with greater lapses of time — a diocesan assembly takes place. At these assemblies, the bishop, his vicar bishops, the members of the diocesan council, the clergy, the rectors of the parishes and from each community a layman — usually, a member of the diocesan council — take part. At the assemblies, general questions of church life, the strengthening of parish life, the opening, closing, division of parishes, the missionary work of the Church (church schools, youth work, publications), etc., are discussed. The deliberations and decisions of these sessions are published in the diocesan papers; a few dioceses even print their own publications on the sessions. [3] There were regular publications on the diocesan assemblies of the North American Diocese, which were printed by the diocese themselves, cf. the Index: Otchet eparkhialnogo s’ezda.

The smallest organizational unit of church life is the parish. In accordance with the size of a parish, it has its own church and parish administration. The organizational basis of the parish is founded upon the “Normal Parish By-laws,” as passed by the Council of 1917-18. The Church Abroad has modified these by-laws several times; the 30 June/13 July 1951 version accepted by the Synod is valid up until the present day. [4] Normal Parish By-laws (Jordanville 1951).

In these “By-laws,” each respective parish is registered as a parish belonging to a diocese of the ROCOR. The goal of the parish is to organize the religious and ecclesiastical life of the parish members and to bring them into an agreement with the Church’s decisions and canons. Also, the parish should fulfill general ecclesiastical and social obligations and guide their members in the spirit of the Orthodox Church. Furthermore, these By-laws define who is a member of a parish and which governing bodies should be established for the purpose of administration. The parish council consists of the parish clergyman as the chairman and of representatives of the laity and is responsible for the administration of the parish. The parish council meets once per month, convened by the president (i.e. the parish priest); in the event of a tie, the vote of the president decides. The final chapter describes the directives over the parish and church in the event of the dissolution of a parish. The parish church forms a church center for the individual Orthodox Christian. In it, the divine services, in accordance with the church typikon, are celebrated, as well as the personal church celebrations: baptism, memorial services, molebens (services of supplication), funerals, receptions into the bosom of the church, confession, and the distribution of the sacraments. Thus, it is understandable that the faithful have at all times given their donations for building their own churches and community centers in a generous manner.